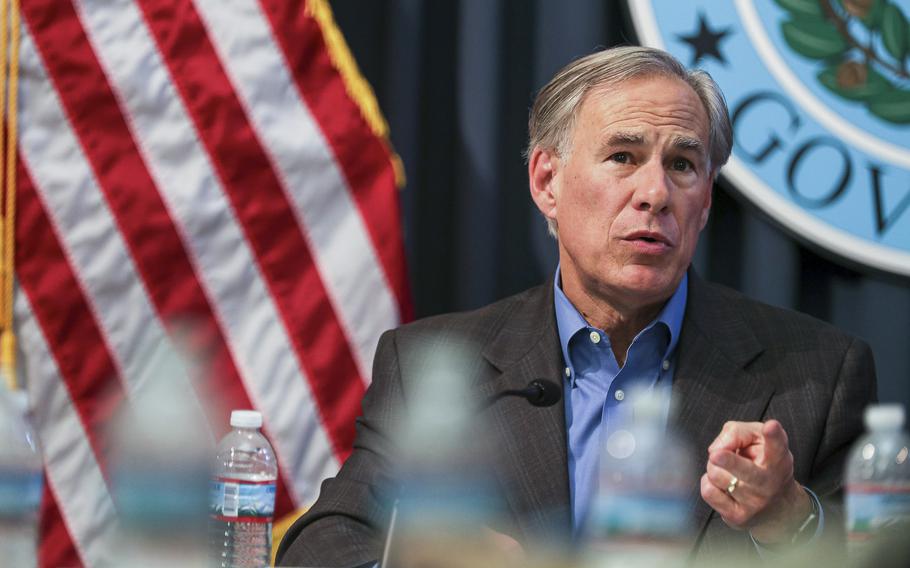 Gov. Greg Abbott holds a security briefing in Austin, Texas, in July 2021. Abbott on Saturday, Dec. 18, announced that a state-funded wall was being built along the border with Mexico. (Austin American-Statesman/TNS)

Speaking in front of a segment of the wall in Rio Grande City, Abbott said the barrier is being built using the same materials used by former President Donald Trump, who oversaw construction of 17 miles of barriers in Texas during his time in office.

"Texas is taking what truly is unprecedented action by any state ever, for a state to build a wall on our border to secure and safeguard the sovereignty of the United States, as well as our own state," Abbott said, flanked by Texas Land Commissioner George P. Bush and officials with the Texas Department of Public Safety and Texas Military Department.

Border security has been a top priority for Abbott this year as he prepares to seek a third term next year. He has dedicated significant state resources toward the border, arguing that the Biden administration has failed to act to stem the influx of migrants there.

"This unprecedented action is needed for one single reason," Abbott said. "That's because the Biden administration has failed to do its job as required by the Constitution, as required by laws passed by Congress to enforce the immigration laws of the United States of America."

In May, Abbott issued a disaster declaration and announced that he planned to construct a barrier using a combination of state dollars and private donations. He said the barrier would be constructed on land volunteered by private property owners. The first segment is being built on land managed by the General Land Office.

Trump, who championed construction of a barrier along the Southwest border, built 453 miles of primary and secondary walls, but work was halted after Biden took office.

Abbott on Saturday said the state-backed wall under construction now is "a replication of the border wall that President Trump put up," using the same design concept and materials, which include thick steel posts. The Texas Facilities Commission is overseeing five contractors selected to design and build the barrier, including one that worked on Trump's wall.

Earlier this year, state lawmakers allocated roughly $1 billion to construct the wall — in addition to $2 billion for other border security initiatives, including deploying additional law enforcement personnel to the border and increasing prosecutions of migrants arrested for misdemeanor offenses.

Some House Democrats bristled at the price tag during debate over the spending proposal in August and asked pointed questions about how disbursement by Abbott's office would be monitored.

Democrat Beto O'Rourke, who is running for governor, called Saturday's event a "photo-op."

"Border communities are tired of Greg Abbott hosting photo-ops instead of fixing the real challenges facing our border communities today, like the Abbott Tax border families will pay on their utility bills because he has failed to fix the grid," O'Rourke said in a statement.

The governor also has been collecting private donations for the border wall effort and said Saturday that he had raised $54 million. A Texas Tribune investigation found that 98% of those donations came from one out-of-state billionaire: Timothy Mellon, who gave $53.1 million in stock to the state in August.

Abbott declined to say Saturday how much the entire project ultimately would cost, citing variables such as different terrain along the border or waterways that construction crews will have to navigate.

"We're going to spend as much as it takes to build as much wall as we possibly can," he said.