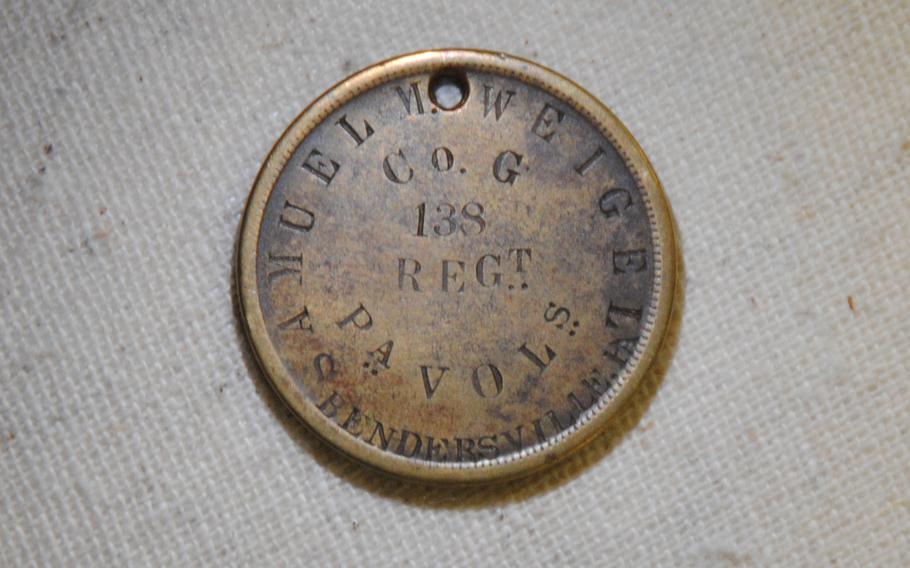 The back of a small, bronze-colored identification disk belonging to Samuel M. Weigel, a private with Company G of the 138th Pennsylvania Infantry. According to regimental history, Weigel was severely wounded during the Battle of Monocacy but survived. (National Park Service)

Twenty-seven of his comrades in the 138th Pennsylvania Infantry had been killed at the Battle of the Wilderness near Fredericksburg, Va., that May, including five from his outfit, Company G.

Seven more from the regiment had been killed at the Battle of Cold Harbor outside Richmond in June.

He had no doubt seen the fate of friends who had fallen, with nothing to identify their bodies for return to their families. So on July 9, when he was seriously wounded at the Battle of Monocacy, near Frederick, Md., he was probably wearing a metal disk bearing his name, regiment and hometown.

This week, the National Park Service announced that the Monocacy National Battlefield Foundation has donated what appears to be the identification disk Weigel was probably wearing that day.

“It is amazing that after 157 years, this ID disk is returning to the battlefield,” Andrew Banasik, superintendent of Monocacy National Battlefield, said in a statement. “This small piece of metal is a tangible reminder of the price paid by so many to save Washington.”

About 1,200 Union soldiers were killed or wounded in the battle.

Civil War ID badges that survive are rare, the Park Service said. There were no government-issued military “dog tags” during the war. And soldiers were terrified that if they were killed, in the chaos of battle their bodies would never be identified.

So a soldier might write his name on a piece of paper and pin it to his uniform before going into combat. He might stencil his name on his clothing. Or he might buy his own ID badge.

Jana Friesen McCabe, chief of resource education and visitor services at the battlefield, said Weigel’s disk was obtained for $1,700 from a reputable artifacts dealer on eBay, and the battlefield received it in October.

It is probably made of a copper alloy and was premade with one side blank, where the soldier’s details could be stamped. That side bears Weigel’s name, regiment, company and hometown, Bendersville, Pa.

The other side has a shield with a stars-and-stripes design, and the phrase, “Against Rebellion 1861.”

“They were mass-manufactured” in 1861, McCabe said. “The ‘1861′ isn’t a reflection of when he purchased it. It’s more the start of the war and the production of those disks.”

Weigel’s might have been purchased from one of the traveling vendors, or “sutlers,” who followed the armies. The vendor may have etched it for him, she said.

The battlefield has another ID badge that bears the name and details of another soldier from Company G - Sgt. Nicholas G. Wilson, who was also wounded in the battle. His badge is made of silver and in the shape of a shield.

The 138th Pennsylvania had been rushed about 300 miles in 36 hours by boat and train from outside Petersburg, Va., to the Monocacy battlefield to face a large Confederate force that was suddenly bearing down on Washington.

The regiment was part of a scratch Union detachment that was thrown together along the river to halt or slow the rebels, who were only about 40 miles from the capital.

The Northern soldiers were outnumbered more than 2-to-1 and were forced to retreat. But they slowed the Confederate onslaught and foiled the capture of Washington.

“What these men did was really incredible,” McCabe said. “They were so badly outmanned and outgunned, and they chose to fight anyway a battle that they knew they couldn’t win. ... They saved Washington, D.C.”

The price was the “hasty abandonment of the field, our dead, and many of the wounded,” a history of the regiment states. Five men were killed. Weigel and 32 others were wounded, and 21 men were captured.

Weigel, who was 24 at the time, survived being wounded, and the war, and he died in 1922 at age 82, according to the Park Service.

His disk has been added to the battlefield’s museum collection but is not yet on display.

Weigel was mustered out of service on June 30, 1865, almost three months after the war ended.

“After the war he married Martha Ann Harmon and had four children, two boys, two girls,” and later six grandchildren, McCabe said in an email.

His 1922 death certificate lists him as a widower and a retired carpenter.

In 1908, the state of Pennsylvania dedicated a 35-foot-high granite monument on the battlefield to the 138th Pennsylvania and two other regiments that fought there.

An inscription reads: “In commemoration of the bravery, sacrifices, and patriotism of the . . . regiments that fought on this battlefield July 9, 1864.”

Two hundred aging veterans attended the event and many were photographed at the monument.

Weigel, then 69, probably lived nearby in southern Pennsylvania and could have been among them, McCabe said.