US is recruiting France, Canada in plan to shore up security in Haiti 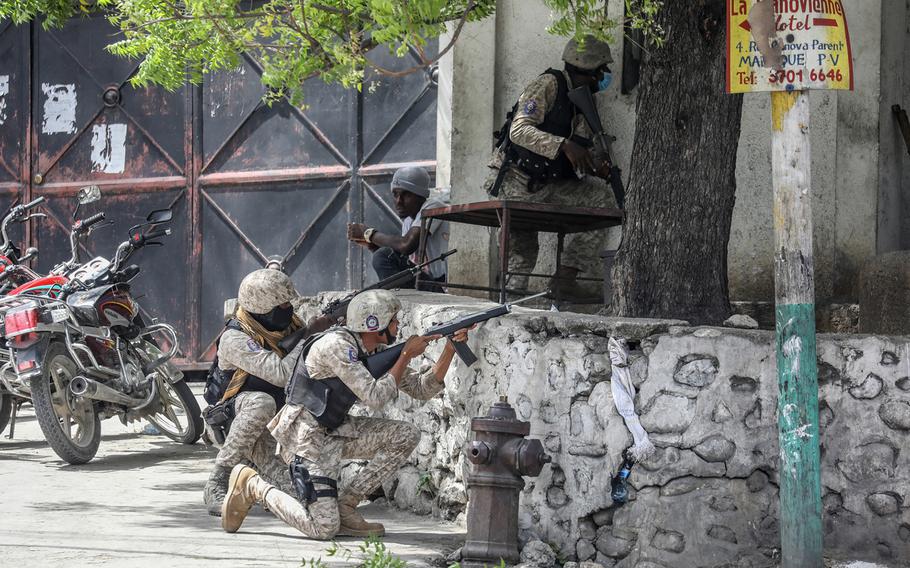 Police exchange fire with armed men next to the Petionville police station in Port-au-Prince on July 8, 2021. (Valerie Baeriswyl/AFP via Getty Images/TNS) (VALERIE BAERISWYL)

WASHINGTON (Tribune News Service) — The Biden administration is asking France and Canada to help lead an international effort to shore up security in Haiti, after a series of crises this year crippled the Caribbean nation and sent shock waves through the region.

Conversations began in the fall on an allied plan to bolster Haitian law enforcement, which has been plagued by corruption and increasingly outmatched by drug-fueled gangs operating throughout the country. A virtual meeting held by the State Department and attended by French and Canadian diplomats Friday included a discussion of the plan.

“A number of the countries that participated in the discussions this morning had previously contributed to an international police support for Haiti through the United Nations, or through the (Organization of American States). They expressed their shared willingness to explore greater police deployment in Haiti whether that was through mentoring, through training or through foreign police units,” Assistant Secretary of State for Western Hemisphere Affairs Brian Nichols, who chaired the virtual meeting with 14 international aid organizations and foreign governments, told journalists afterward.

“The structure of how that would happen, the coordination pieces is something that we all agreed, we needed to explore further,” Nichols said.

Acknowledging the effort still requires more work, Nichols said in addition to funding and equipment the United States has announced for the Haiti National Police, commitments were received from other countries that had not previously provided police funding. Japan, for example, said it would give $3 million to build housing and other facilities for police.

“The reality is whatever investments we provide for the Haitian national police need to be accompanied by gains in governance, transparency and anti-corruption efforts,” he said.

Vice President Kamala Harris raised the prospect of an international coalition to support Haiti in her meeting with French President Emmanuel Macron in Paris last month, as well as her recent conversations with Prime Ministers Justin Trudeau of Canada and Boris Johnson of the United Kingdom, a White House official said.

French officials familiar with the matter say that security was a focus in Harris’ conversation with Macron on Haiti, which was raised at the end of their meeting. The U.S. proposal on supporting Haitian law enforcement is still being reviewed by the French.

While details of the U.S. plan are sparse, multiple sources told the Miami Herald and the McClatchy Washington Bureau that it would rely heavily on help from its partners and involve security training.

Following a recent visit to Port-au-Prince, Todd Robinson, assistant secretary of state for the Bureau of International Narcotics and Law Enforcement Affairs, told the Senate Foreign Relations Committee that they were looking at training a new SWAT team within the Haitian police to tackle the gang crisis.

Haiti’s police force remains weak despite receiving $300 million in U.S. spending over the past decade, in addition to assistance from Canada and the United Nations.

The Haiti National Police has struggled to contain gang violence, which has fueled a kidnapping surge and a monthslong blockade of the country’s fuel ports, eroding confidence in Washington that the security force can prevent the string of crises from continuing.

The ongoing investigation into the July 7 assassination of President Jovenel Moïse, now in the hands of an investigative Haitian judge, has yet to result in formal charges or identify a motive, despite the detention of more than 40 suspects.

Nichols said the United States recently increased its support to the Haitian national police by $15 million, including $12 million to strengthen its capacity to respond to violent gangs and efforts by communities to resist them. It also plans to increase advisers to the agency, training in anti-gang tactics and finance upgrades to its SWAT facility.

“During the Moïse administration we saw a lot of the previous investments in policing were left without proper maintenance or support. Morale within the Haitian national police declined. Funding from the Haitian government for things like salaries really did not arrive for the police. So it was a significant degradation in their capability,” Nichols said. “In recent years, they had been quite capable, prior to that.”

Those years involved the 2004-06 transition period that began after then-President Jean-Bertrand Aristide was forced into exile amid a bloody coup. Gangs controlled only a small portion of the capital and the police force that the U.S. had rebuilt after his first return from exile in 1991 had been decimated by drug-trafficking cops. Following Aristide’s departure, U.S. and French troops were deployed to Haiti, later followed by a U.N. peacekeeping mission.

The U.S. security proposal comes at a delicate time for the Biden administration. The White House has already been facing criticism for its treatment of a surge of Haitian migrants that arrived at the U.S. southern border in September and its extension of the “Remain in Mexico” policy — an immigration policy first devised by President Donald Trump’s administration and criticized by progressives — to Haitian migrants.

The administration has also come under heavy criticism from members of Congress and Haitian civil society, on the one hand, for having a heavy hand in Haiti, and on the other for its refusal to support an initiative by Haitian civil society groups to begin a two-year transition that would include new faces taking charge of the country.

Others have called out the administration for not supporting the use of special forces to train the current Haitian police, or a return of U.N. peacekeepers, whose withdrawal from Haiti after 15 years was heavily supported by the United States, France and the United Kingdom at the U.N. Security Council.

“When it comes to the Haitian National Police, we’re not going to lead with the military, but rather use our civilian tools to support them, whether it’s in providing assets, equipment and even training,” a senior Biden administration official told reporters in October.

“We think that particularly given some of the debates that are taking place in this country about the militarization of the role of the police and the standards of the police in terms of treatment, standards of the use of force, we believe it’s better for us to provide that sort of training from a civilian perspective that reflect the lessons that we’re learning in the United States,” the official added.

The State Department said it was hosting the meeting Friday of international partners to ask for “commitments to prevent further deterioration” in Haiti as its security crisis deepens.

In addition to security, the issue of the ongoing impasse between Haiti’s main two political actors, the government of interim Prime Minister Ariel Henry and those supporting the civil society initiative, was also discussed.

Partners agreed, Nichols said, “that political dialogue must continue among all sectors of Haitian society to build consensus on a political accord.”

“When Haitians reach a consensus agreement, the international community stands ready to support Haiti’s path back to restoring its democratic institutions, including hold an election when conditions permit,” he said. “In the past, the international community has frankly, grown frustrated too quickly, when Haitians haven’t been able to agree. And we just said, ‘Well, if you can’t come together in our time frame, then we’re just going to impose an outside solution.’ We’re not going to do that. We are focused on supporting Haitians to come together around a way forward.”

After the assassination of Moïse in July, Haiti asked the United States and United Nations for military assistance. The request for troops followed a similar request by Moïse to the United Nations months before his murder.

Neither was willing to send troops, and France’s foreign minister, Jean-Yves Le Drian, also expressed skepticism. But Le Drian did suggest that France would be prepared to provide police, if needed, “under the authority of the United Nations.”

A dispatch of police officers “should be seen as part of a strengthening in the United Nations presence, which is currently insufficient, to be able to ensure the electoral process,” France 24 quoted Le Drian as saying outside a U.N. meeting on Libya and the protection of humanitarian workers.

France and the United States sent military troops to Haiti in 2004 after then-President Aristide was forced into exile. A U.N. peacekeeping mission followed, and in October 2017, U.N. military blue helmets were replaced by a police mission. The United Nations Mission for Justice Support in Haiti was in place from 2017 until 2019, and has since been replaced by a small political mission, which was invited to Friday’s meeting.

Any new U.N. mission would have to be approved by the U.N. Security Council, which would require the Biden administration to go head to head with China for approval. China has been a critical voice about past U.N. interventions in Haiti and recently sought to shut down the current operation.

Nichols, when asked about the possible deployment of U.S. military forces or pushing the U.N. Security Council for another peacekeeping mission, noted that on the call were France, the United Kingdom, Mexico and Brazil, which have current or future influence on the Security Council.

“I think there’s broad agreement that the security situation in Haiti is a policing challenge. It’s not a military challenge,” Nichols said. “Figuring out what the right array of support for that policing requirement in Haiti is something that we discussed in the meeting, and we decided that we need to go back and think about that more.”