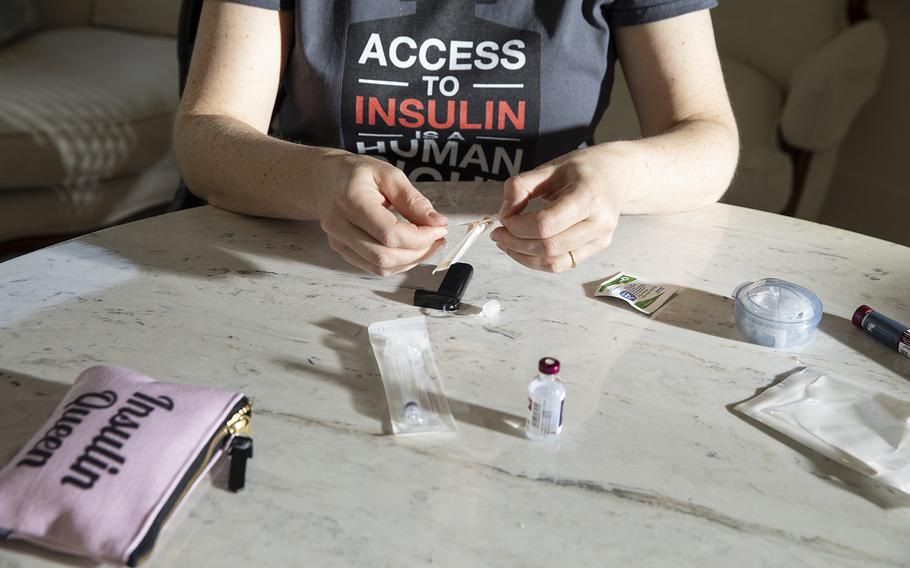 Lija Greenseid prepares to draw insulin at her home in St. Paul, Minn. More than 7 million Americans depend on insulin to keep their bodies functioning, according to the American Diabetes Association. (Jenn Ackerman/The Washington Post)

WASHINGTON — Democrats promise they'll soon fix a problem that has tormented diabetics for years — the soaring price of lifesaving insulin that has forced some patients to choose between filling a prescription and paying for food, housing or other essentials.

"If you're one of those Americans that are paying too much for insulin, my 'Build Back Better' plan is going to change that ... because we're going to guarantee you pay no more than $35 a month," President Joe Biden said last week.

But it's a pledge Democrats may be unable to keep, as they seek to speed their massive social spending package to the Senate floor for a vote, which could happen as soon as this month. Senate Republicans are eyeing a procedural move to prevent the insulin cap from applying to privately insured Americans, seeking to deny Democrats a talking point heading into next year's midterm elections — even if it means that some patients will go without relief.

"There's definitely an expectation that Republicans are going to challenge the provision," said Lauren Aronson, a Democratic strategist and the executive director of the Campaign for Sustainable Rx Pricing.

Senate Republicans repeatedly declined to comment on whether they would use the "Byrd rule" — which governs legislation enacted through the budget process — to knock out part of Biden's insulin plan. "We aren't commenting on any part of the Byrd challenge process at this time," Melanie Lawhorn, a spokesperson for Sen. Mike Crapo, R-Idaho, the top Republican on the Senate Finance Committee, wrote in an email.

At least 19 Senate Republicans have previously signed on to legislation to lower drug costs for diabetics, but Senate Minority Leader Mitch McConnell, R-Ky., has pushed the GOP to oppose the Build Back Better Act as a bloc. And even Republicans who have written legislation to limit the price of insulin, such as Sens. Charles Grassley (Iowa) and John Neely Kennedy (La.), have been tight-lipped about whether they would support efforts to stop Democrats' cost controls.

"Senator Grassley and his office are going to reserve comment at this point," spokesperson George Hartmann said.

Politicians from both parties have promised for years to find ways to lower the skyrocketing price of insulin — a drug that more than 7 million Americans depend on to keep their bodies functioning, according to the American Diabetes Association. But bipartisan pledges, investigations and even new government policy under President Donald Trump have produced little tangible effect, as pharmaceutical companies continue to patent tweaked versions of a drug that dates to a century-old medical breakthrough.

One branded insulin drug called Humalog, which cost about $21 per vial when Eli Lilly introduced it in 1996, lists today at about $275 in the United States — an increase that has mystified and angered public health experts, who say the drug formula has not changed, even as its price has multiplied. Patients may need several vials per month of the medicine, which is available at a fraction of the cost overseas. Although Eli Lilly debuted a half-price generic version of the drug in 2019, experts faulted the move as insufficient.

"As I researched this topic, I found that 25 to 30 percent of Americans ration their insulin because of high cost," said S. Vincent Rajkumar, a Mayo Clinic physician who has studied the drug's prices and who said reforms are desperately needed.

"The ability to keep increasing the price every year on the same product happens only when there is no market force" to keep drugmakers in check, he added.

Biden and his allies are also getting pushback from some advocates and policy experts who argue that the focus on a $35 monthly limit has oversold what the legislation would deliver. Democrats' planned price cap applies to insulin co-pays and, therefore, doesn't extend to uninsured Americans, who face the highest sticker prices when trying to purchase drugs.

"We worked our butts off to make insulin the poster child for drug-price gouging," said Laura Marston, an attorney who lives with diabetes. "It feels like the Democrats are acknowledging what's going on, but then they're not willing to actually push forward to take real action to make it right" for the uninsured.

As jockeying over the spending bill continues, diabetics have appeared on Capitol Hill to share their stories about spending hundreds of dollars per month on insulin — or going without and suffering disastrous consequences. Mindy Salango, a patient advocate from West Virginia, on Friday told reporters at a news conference convened by Democrats and Protect Our Care, an advocacy group, that she spends about $350 monthly to cover her insulin needs, despite having private health insurance through her employer.

"I've met people in a parking lot to provide them with insulin and supplies that they need to survive," Salango said. "This is not health care. This is survival of the richest."

Biden insists his legislation will finally deliver for diabetics. Under the version of the Build Back Better Act that passed the House last month, insulin co-pays for all Americans with private health insurance coverage or those enrolled in Medicare, the government's insurance program for seniors, would be capped at $35 per month beginning in 2023. In addition, Medicare would begin negotiating with manufacturers over the drug's price, which officials say will help reduce future increases.

The insulin provisions were added to the package after liberal Democrats rebelled against Biden's initial framework for the legislation in October, which excluded drug price policies, as the White House sought to win 50 votes in the Senate. The administration initially did little to publicly promote the changes, focusing instead on measures such as expanding child care and tackling the climate crisis.

Prominent liberals have since implored Democrats to tout the insulin provisions, saying it's a winning issue and a long-sought and important achievement.

The White House subsequently amped up its promotion of the insulin plan on Twitter and in speeches this month.

But whether the measure will survive, and in what form, is unclear amid the threat of parliamentary challenges from the right and demands from the left to make it more robust.

Rep. Pramila Jayapal, D-Wash., chair of the Congressional Progressive Caucus, Rep. Cori Bush, D-Mo., and 95 other House lawmakers last week urged the Senate to amend the bill so the insulin price cap would take effect next year and apply to diabetics who are uninsured.

"Being uninsured, even for a short period during a job transition or marriage status change, can be deadly for a person with diabetes, who will have to pay full retail price for their insulin during that time," the House lawmakers wrote.

Policy experts are similarly concerned that the plan leaves out the neediest patients. Although some seniors have strained to pay for insulin, most Medicare patients don't struggle with the cost of the drug, said Juliette Cubanski, deputy director of the Medicare policy program at the Kaiser Family Foundation.

"There is real benefit here," she acknowledged, "... but at the same time, I think it's important to also focus on what isn't being addressed here: the high cost of insulin for people who don't have insurance."

Democrats counter that the insulin provisions, if enacted, would still be a significant achievement and that other provisions of the spending measure would greatly reduce the number of uninsured.

"Insulin has cost too much for too long, and too many people depend on this drug for us to let this moment pass," Sen. Patty Murray (D-Wash.), who chairs the Senate Health, Education, Labor and Pensions Committee, said last week.

Administration officials note the Build Back Better Act includes coverage expansions that would allow millions of uninsured Americans to enroll in Medicaid or purchase low-cost plans through the Affordable Care Act's insurance exchanges, which will extend new and existing protections to uninsured diabetic patients. Medicaid, the safety-net health program for low-income Americans, charges no or minimal out-of-pocket costs for insulin.

"The single most important policy factor affecting access to affordable insulin for adults ages 18-64 is Medicaid expansion," the Commonwealth Fund wrote in a report last year.

Meanwhile, Republicans have been meeting with the Senate parliamentarian to determine whether the bill's health provisions would technically qualify under budget reconciliation, a legislative maneuver that allows Democrats to avoid a GOP filibuster and enact policy changes with a simple majority, so long as the legislation is linked to the federal budget. Under the Byrd rule, lawmakers can challenge individual provisions in the bill.

If Senate Republicans challenge the insulin provision, some policy experts say they expect the parliamentarian will determine that the plan to cap insulin costs for privately insured Americans is "merely incidental" to the federal budget. In that case, Republicans could call a point of order to strip the provision from the bill.

Although the Senate could overrule the parliamentarian, that would require 60 votes — the entire Democratic caucus plus 10 Republicans — and McConnell has already made clear: His caucus will vote to oppose the Build Back Better Act and its provisions.

Any GOP challenge to the provision could provoke a serious Democratic response, Senate Majority Leader Charles Schumer, D-N.Y., warned last month, saying that he will fight to preserve the insulin price caps.

"To those in the GOP who want to say, 'Kill this provision,' I say stand down, stand with the American people," Schumer said in a news conference.

Diabetic patients say they've grown frustrated with drug price politics and are desperate for a solution that ensures low insulin costs for all.

"I hope none of you have to go to the pharmacy and walk out without your lifesaving medication," said Salango, the patient advocate from West Virginia. "I hope you never feel that terror."