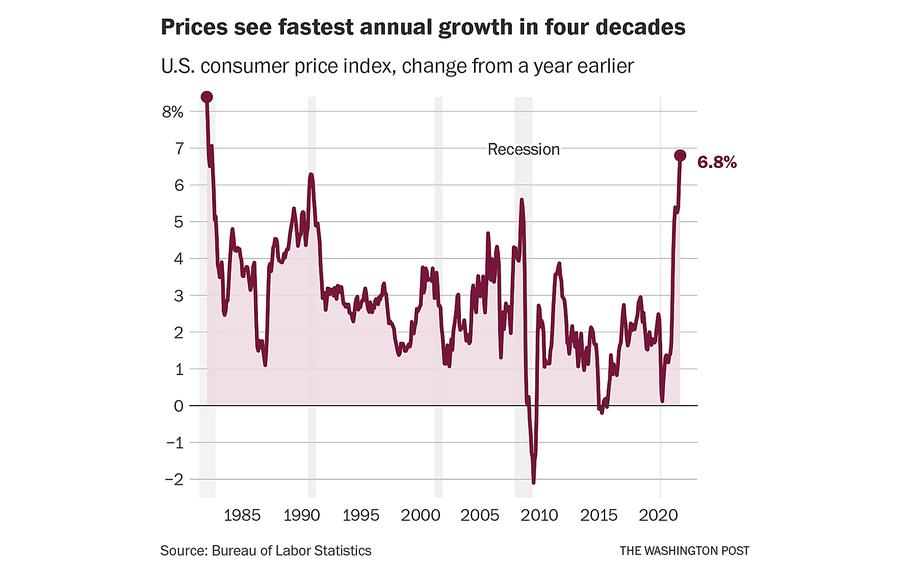 WASHINGTON - Prices rose at the fastest pace in nearly 40 years last month, increasing 6.8% over the same period a year ago, as inflation continues to squeeze households and businesses nationwide and complicates the political environment for Congress and the White House.

Consumer price index data released Friday by the Bureau of Labor Statistics showed that prices rose 0.8% in November compared with October, with inflation spreading further throughout the economy, including to areas that had not been as affected by the coronavirus pandemic.

The November data marked the largest 12-month increase since June 1982, during a period when inflation was more of a scourge on daily life than most millennials have ever known. Current inflation dynamics have been spurred by a devastating pandemic that roiled the global economy, upsetting the workforce and supply chains, while stimulus measures helped unleash high demand for goods.

The broad-based increases span just about every sector, from pork, poultry and produce to housing and sporting goods. Companies large and small are raising prices or making tough decisions to make up for the rising costs of hiring, transportation and basic goods. Even Dollar Tree, which has long sold items for $1, is hiking prices to $1.25.

In time, it is possible that lower gas and energy prices or unclogged supply chains will help steer prices back down to more-sustainable levels. But it is unclear when that will happen, and in the meantime, businesses and consumers could start to change their expectations of what is still to come. Plus, the more persistent and embedded high prices become, the harder it will be for policymakers to rein them in.

"Yes, inflation can abate, but what [policymakers] care about is: Is it significant or insignificant to peoples' lives and decision-making?" said Diane Swonk, chief economist at Grant Thornton. "This is inflation that's not likely to be insignificant anytime soon, and that's a problem."

Inflation has emerged as a top political concern ahead of the 2022 midterms, with the cost of food or gas often a test for how people perceive the economy.

Democrats rallied behind a different message, saying their Build Back Better spending proposals are key to lowering costs, including for child care and health care.

"We've never had this kind of growth in 60 years, but inflation is affecting people's lives," President Joe Biden said Friday at his Summit for Democracy. "The reason why . . . economists think [Build Back Better] is going to, in fact, diminish the impact on inflation is because it's reducing costs for ordinary people," Biden added.

The November increases were driven by broad-based price hikes in most of the categories tracked, similar to October inflation. Indexes for gasoline, shelter, food, used cars and trucks and new vehicles were among the larger contributors. Airline fares also increased in November, rising 4.7% from October after declining over the previous few months as people geared up for holiday travel.

Roughly half of the month-over-month increase in the consumer price index was due to price increases in cars and energy. The energy index was up 3.5% in November, and measures of gasoline were up 6.1%. Recent moves by the Biden administration intended to bring prices down at the pump are not reflected in Friday's data.

The cost of medical care has risen in four of the past five months, although it grew at a slower pace in November than October. Swonk noted that coronavirus cases and the recent delta-variant wave have filled hospitals to capacity in many parts of the country, which can prompt hospitals to pause elective surgeries.

The price increases can also be seen in the grocery store aisles, with food companies including Campbell Soup, Kraft Heinz and Mondelez all announcing higher prices on items such as soup, macaroni and cheese, crackers and cookies.

Friday's inflation report showed rent was up 0.4% in November compared with the month before, and 3% compared with last year, in part because of soaring home prices and supply chain issues limiting construction of new homes. Economists say that hikes in housing are concerning, especially since rent and home prices make up large shares of household budgets and are not expected to ease, even after the pandemic eases or global supply chain snarls clear up.

Rent and shelter costs tend to be "much stickier than, say, fuel or food or industrial supply components," said Joe Brusuelas, chief economist at RSM. "This is the channel through which a possible wage-price spiral starts because it reduces disposal personal income."

By many measures, the economy has made tremendous progress since it was thrust into a recession in early 2020. The labor market has added 6 million jobs since Biden took office. Economic growth is surging far faster than most economists forecast earlier in the pandemic. The stock market is also up roughly 25%.

But inflation has proved to be one of the most visceral ways people judge economic recovery from the pandemic. White House officials have been frustrated by a disconnect between such strong progress and a public discontent that is showing up in opinion polling and Biden's approval ratings.

In recent months, Federal Reserve policymakers have had to ditch their long-held message that inflation is limited and temporary, as that conflicted with what's been unfolding nationwide. The Fed's main policy tool for blunting inflation is raising interest rates, which cools the overall economy down and slow growth in part by raising the cost of loans and business investment. Economists increasingly expect the Fed will hike rates as early as next spring, much faster than projected earlier this year.

Meanwhile, financial markets appeared to shrug off the November inflation news, with the Dow Jones industrial average and the tech-heavy Nasdaq up slightly on Friday.

There are also renewed concerns about workers' wages and how the basic cost of living could begin to lag behind inflation. Stagnant wages haunted the country for years, but the pandemic recovery brought in a new era that gave workers more leverage and contributed to better earnings for rank-and-file workers, which grew at the fastest pace in decades. Stimulus checks and other government benefits, like the child tax credit, are also helping cushion households' savings and balance sheets.

Yet, the rising cost of goods and services is cutting into those gains, especially for households without much room to stretch their budgets. Food banks around the country report that families are continuing to show up for meals and groceries, as they weigh whether to pay for gas, rent, food or medication.

Plus, some employers aren't increasing salaries with inflation. Google executives, for example, said the company wouldn't be instituting companywide pay raises to adjust to inflation, according to CNBC.

Top officials at the White House and Fed have maintained that unsustainably high prices won't become a permanent feature of the economy, and that policymakers, if necessary, have the right tools to get inflation under control. But over the past few months, they've been forced to back away from their initial message that inflation is temporary, or "transitory," because that position became increasingly at odds with what was unfolding in the economy - and the ways people were experiencing it.

The Biden administration has suffered low approval ratings and political attacks from Republicans, who blame Democrats' stimulus measures for overheating the economy this year.

The White House, for its part, touts steps it is taking to lower everyday expenses. Much of its argument for its safety net and infrastructure plan is that the proposals would bring down costs for working-class families, including in housing, health care, groceries, gasoline, elder care, child care and education.

Gas prices have ticked down in the past few weeks, although that drop isn't in this inflation report.

It's unclear when inflation will come down closer to the Fed's 2% annual target. Much depends on the pandemic and when supply chains have a chance to clear. But the concern is that the price increases are showing up just about everywhere, including in corners of the economy not directly pummeled by the coronavirus recession.

That leaves households and businesses to decide how to stretch their budgets or raise prices to stay afloat. For decades, Dollar Tree staked much of its brand on selling everything for $1. That strategy lasted decades, until the retailer announced it was raising prices by a quarter. In an earnings call this week, Campbell Soup pointed to its recently announced price increases intended to offset added costs of ingredients, packaging, logistics and labor.

"We are aggressively combating raw material inflation with significant pricing actions across each of our businesses," Sherwin-Williams chief executive John G. Morikis said in an October earnings call. "We implemented multiple price increases in the quarter. We will continue to do so as necessary."

Inflation is already posing a major test for the Fed going into 2022. The central bank is charged with keeping prices stable and getting the economy to full employment. And while it has so far held off on combating inflation so that the job market has time to grow, it may soon be forced to raise interest rates and cool down the economy so that high prices don't become even more persistent.

For now, the Fed is winding down its vast asset purchase program, which has supported the financial markets for much of the pandemic, and Fed policymakers are expected to speed up the pace of that "taper" at their meeting next week.

The Washington Post's Andrew Van Dam and Mariana Alfaro contributed to this report.