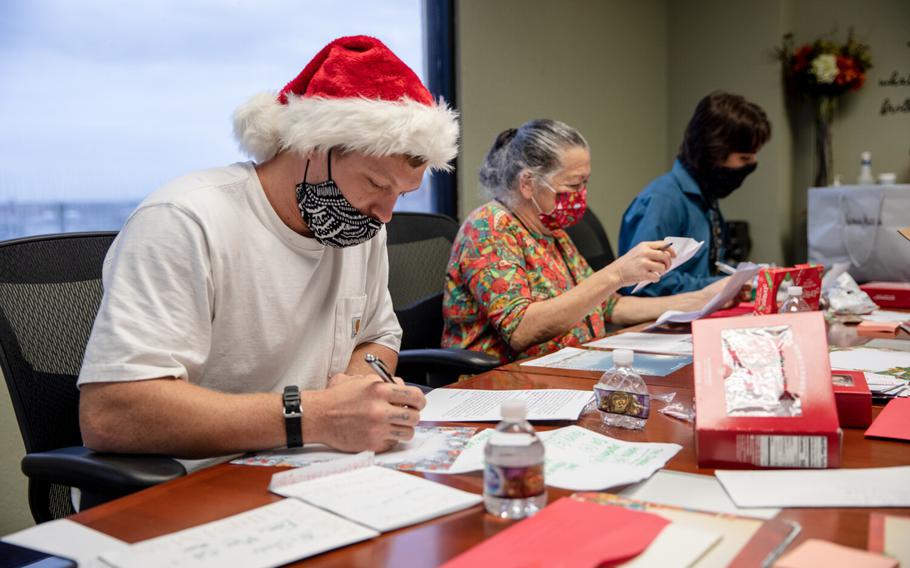 SAN DIEGO (Tribune News Service) — This is a very busy time of year for Santa, and he can’t be expected to answer every letter that boys and girls send to the North Pole.

Fortunately for him, men and women staying at the San Diego Rescue Mission are lending a hand this year.

“I feel really special to have the privilege to answer these letters,” said Brian Castro, 30, who has been at the Rescue Mission five months. “It makes me feel pretty special. Today, we have a chance to fill their hearts with happiness and joy. And there’s nothing more exciting for a kid than to believe in Santa.”

Castro, who is enrolled in the year-long Mission Academy residential program at the downtown mission, was at a table with other academy students Friday morning creating hand-written replies to children who had dropped off letters to Santa in a big mailbox in front of a Coronado home.

The mailbox is at the home of Nicole Billock, vice chair on the mission’s finance/fundraising committee. Billock said she and her husband put up the mailbox as part of their Christmas display last year and invited children to drop off letters through the Coronado Happenings Facebook page. About 400 letters were dropped off, and Billock said the youth group from her church wrote responses to children.

This year, she saw the letters as a perfect activity to help formerly homeless people connect with the community. The first 60 were delivered to the mission this week along with examples of how to write responses. Each letter is hand-written and personalized to respond to the child who wrote it.

“I’m not a good writer,” he said. “I’ve already had three rough drafts.”

But Dellisant, who has been at the mission nine months, said he likes to help out anyway he can, such as volunteer for the group Urban Surf for Kids.

Devon Edwards, 26, wore a Santa hat as he wrote responses to children.

“It’s just pretty cool to think that three months ago I was living only for myself and a paycheck,” he said. “I’m a little bit of a reformed person and can spread some good joy. Some Christmas cheer, if you will.”

Edwards had been working as a utility pipe layer in Pennsylvania and said he was using drugs when he decided to move to San Diego and redirect his life two months ago.

“I came out here with just a backpack of stuff and no plans,” he said. “If I couldn’t figure it out, at least it would be warm.”

He asked a gas station attendant where he could find an Alcoholics Anonymous meeting, and he was directed to the Rescue Mission. Once there, he learned that they do not conduct AA meetings, but had something else to offer.

“I talked to the therapist who said, ‘How’d you like to spend the next year here, getting your life together?’” he said. “I committed to it on the spot.”

Castro said he’s also at the mission to turn his life around. He spent eight years in prison, and his fiance died in a car accident while he was incarcerated.

“Long story short, I made some mistakes some years ago,” he said. “I was homeless for a couple of years and I was trying to get back on my feet by myself. It was not functioning at all.”

Castro said his family struggled when he was growing up in Mexico, and Christmas sometimes was just another day. As he filled out letters to children, he said he hoped he would brighten Christmas for them.

“It’s a special day for me,” he said about the holiday. “I’m a person who likes to serve others. I find a lot of joy and peace in that. This place gives me the opportunity to do that. There’s a lot of people in need out there, and we have to share the blessings we have.”

Billock said people responding to the children’s letters have been asked to make note of any that indicate their family is in need. Last year, her family helped out some families after finding out their situation through their children’s letters, she said.

“We get letters from Chula Vista and San Ysidro,” she said. “I’ve had people from as far away as Rancho Bernardo.”

Billock said people outside of Coronado might have learned about the mailbox because they were in the military and once lived in the city, and have stayed in touch with the community through the Coronado Happenings page.

Eufrosina McCoy, 65, was among the people writing responses to children on Friday.

“I like doing it,” she said. “I can express my feelings, and I want the children to know they can get all the gifts they want and have the happiest season.”

Linda Perez, 66, was touched with the sincerity of some of the letters.

“ Dear Santa, how are you doing?” a letter from a girl named Samantha read. “I hope you’re doing well. I help my mom and dad with things they have to get done. I do all my homework and take care of my sister and help my friends when they get hurt. I’m very kind and helpful.”

Perez noted that Samantha was not asking for anything for Christmas, and she wrote back thanking her for being a good girl and helping her family and friends.

She said reading the letters made her think of her great grandson who is living in Tijuana with his family.

“Some of these letters just fill my heart with joy,” she said. “To respond to them gives them some hope. And I miss my great grandson, so I’m helping other kids with their Christmas.”