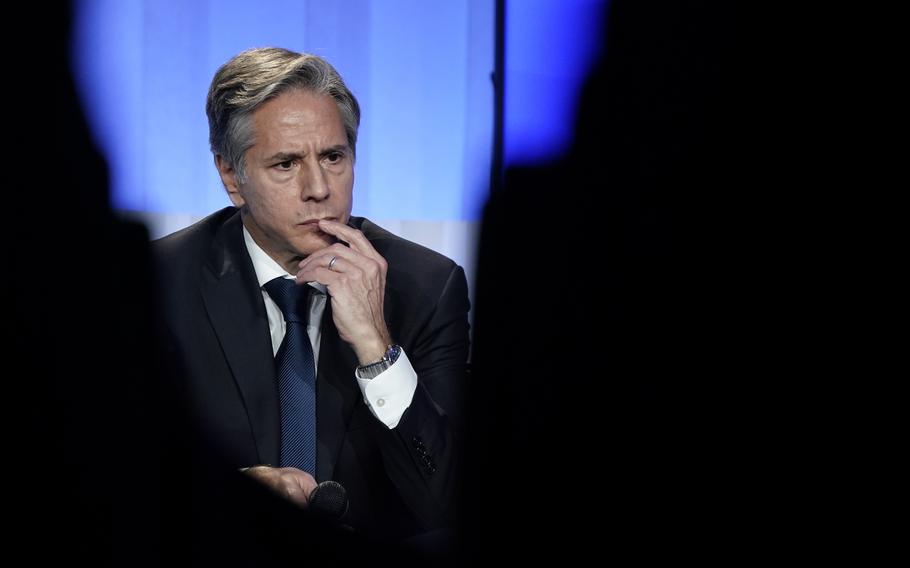 Secretary of State Antony Blinken participates in a Blue Dot Network Discussion at the Organization for Economic Cooperation and Development's Ministerial Council Meeting, Oct. 5, 2021, in Paris. The State Department on Friday, Nov. 5, 2021, named a new coordinator for its investigation into cases of so-called Havana Syndrome. (Patrick Semansky/AP)

A U.S. diplomat who says he suffers from a mysterious illness known as “Havana Syndrome” has sued the State Department and Secretary of State Antony Blinken for disability discrimination, alleging that he was poorly treated compared with colleagues who reported similar ailments, and that he suffered retaliation from the U.S. government.

In a complaint filed Wednesday in the United States District Court for the Eastern District of Virginia, Mark Lenzi also accused the State Department of initially downplaying the health risks of Havana Syndrome. He said an agency-affiliated doctor refused to diagnose him with the condition, meaning he received less support than other colleagues.

The State Department did not immediately respond late Thursday to a request for comment. It has previously said it is focused on providing care to people suffering from the ailment. In recent months, the Biden administration and Congress have accelerated efforts to help people believed to have it.

Havana Syndrome, named after the Cuban capital where cases were first reported among Western diplomats five years ago, includes symptoms such as headaches, nausea, memory loss and other cognitive difficulties.

Some 200 cases have been logged since its emergence, but the condition has confounded medical experts. Some have characterized it as the possible result of “pulsed radio frequency” attacks, which others have called “scientifically implausible.” Current and former U.S. intelligence officers have suggested that Russia is responsible, though there is no publicly available evidence and Moscow has denied the charge.

The United States has been criticized for a slow response to the issue, which has plagued government officials stationed even in countries that have friendly ties with Washington. This year, two senior U.S. officials were replaced after being accused of failing to take the incidents seriously enough.

Lenzi, a former staffer for the late Sen. John McCain, has been actively calling for the U.S. government to do more about Havana Syndrome. He was working as a security engineer officer for the U.S. Consulate in Guangzhou, China, when he and his family started experiencing excruciating headaches in 2017, he previously told The Washington Post.

After his neighbor, a U.S. government employee, was purportedly evacuated for Havana Syndrome, the State Department sent a security engineer to assess the premises. The lawsuit described a “check-the-box” evaluation and alleges that the investigator used an “inferior device” for the assessment.

His supervisor told him that he was “being too emotional” about the issue after he complained, Lenzi claims. He also alleges that after he sent a mass email to his colleagues warning of the potential harm, the State Department engaged in “crude and cruel” retaliation by ordering him to undergo a psychiatric evaluation.

Lenzi was eventually diagnosed with a brain injury after being evacuated with his family to the United States, according to the filing. But he said his career has stagnated since his return, with promotions stalled and requests for several foreign postings denied.

For the past three years, he has worked in a State Department office in New Hampshire, which provided poorer compensation than he had received when abroad, according to the lawsuit. Lenzi also alleges that he was recently given another domestic assignment against his wishes and that such an appointment was usually reserved for people facing disciplinary action.

The diplomat has filed three complaints to the Equal Employment Opportunity Commission, but he said they were dismissed after he decided to pursue a civil suit against the State Department.

In October, President Joe Biden signed into law a bipartisan bill to financially support U.S. government personnel believed to be suffering from Havana Syndrome. Blinken has also appointed top officials to investigate the syndrome and oversee care for those afflicted.

“There is absolutely no stigma in reporting these incidents and there will, of course, be no negative consequences of any kind,” he said in November. “On the contrary, reporting means that we can get people the help they need and by reporting you can help keep others safe and help us get to the bottom of who and what is responsible.”