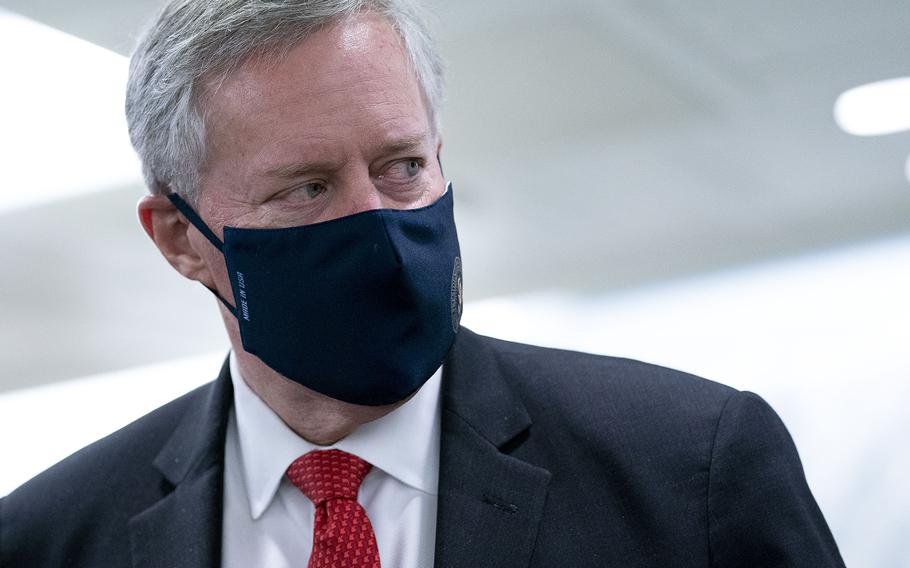 WASHINGTON — The House select committee investigating the Jan. 6 insurrection said it will “be left no choice” but to move to advance criminal contempt of Congress proceedings against Mark Meadows, a former chief of staff in the Trump White House, if Meadows does not appear at a deposition scheduled for Wednesday.

Meadows informed the bipartisan panel Tuesday morning that he would no longer appear before the committee on Wednesday but would be open to answering questions in writing, according to a letter his attorney sent to the committee that was obtained by The Washington Post.

Committee leaders blasted Meadows on Tuesday afternoon for his about-face and released a withering statement noting that he had just published a book about his time as chief of staff to President Donald Trump.

“Mark Meadows has informed the Select Committee that he does not intend to cooperate further with our investigation despite his apparent willingness to provide details about the facts and circumstances surrounding the January 6th attack, including conversations with President Trump, in the book he is now promoting and selling,” Reps. Bennie Thompson, D-Miss., and Liz Cheney, R-Wyo., the committee’s chairman and vice chair, said in a joint statement.

Thompson and Cheney added that the Jan. 6 committee has many questions for Meadows that would fall outside any claims of executive privilege, including his communications with several people as the insurrection unfolded and the “voluminous” official records stored in his personal phone and email accounts. The bipartisan House panel is investigating the storming of the U.S. Capitol by a pro-Trump mob trying to stop the certification of Joe Biden’s electoral college win, an attack that resulted in five deaths and injured about 140 members of law enforcement.

“Tomorrow’s deposition, which was scheduled at Mr. Meadows’s request, will go forward as planned,” Thompson and Cheney said. “If indeed Mr. Meadows refuses to appear, the Select Committee will be left no choice but to advance contempt proceedings and recommend that the body in which Mr. Meadows once served refer him for criminal prosecution.”

The committee said last week that Meadows had produced records to the committee and would soon appear for an initial deposition. At the time, Meadows attorney George Terwilliger said his client wanted to reach an agreement with the committee that would not require him to waive executive privilege “or to forfeit the long-standing position that senior White House aides cannot be compelled to testify before Congress.”

On Tuesday, Terwilliger wrote that Meadows had been willing to appear voluntarily for a deposition to answer questions about “non-privileged matters” but changed his mind based on new information given to them late last week.

“Now actions by the Select Committee have made such an appearance untenable,” the lawyer said. “In short, we now have every indication from the information supplied to us last Friday — upon which Mr. Meadows could expect to be questioned — that the Select Committee has no intention of respecting boundaries concerning Executive Privilege.”

Trump and many of his allies have continued to insist they will exert executive privilege to resist any cooperation with the House select committee, referring to a legal theory that sitting presidents and their aides have invoked to shield themselves from past congressional inquiries.

Last month, White House Deputy Counsel Jonathan Su sent a letter to Terwilliger notifying him that Biden would not assert executive privilege or immunity over the documents and deposition requested by the committee related to his client.

Terwilliger said Tuesday that Meadows would still be willing to answer the committee’s questions in writing.

“Nonetheless, as we have before, we reiterate our willingness to consider an interrogatory process of Select Committee written questions and answers from Mr. Meadows so that there might be both an orderly process and a clear record of questions and related assertions of privilege where appropriate,” Terwilliger wrote in the letter to the committee.

Members of the select committee did not immediately respond to requests for comment Tuesday.

Meadows’s about-face comes shortly after a portion of his new book, which the Guardian obtained and published last week, revealed that Trump had tested positive for the coronavirus three days before his first presidential debate with Biden last year, and that Meadows had helped keep it a secret.

“Nothing was going to stop him from going out there,” Meadows wrote in his book.

Trump blasted the story as “Fake News.” Meadows later that day told Newsmax that he agreed with Trump — “it’s fake news” — and tried to minimize the severity of the positive coronavirus test, saying Trump had tested negative afterward.

Meanwhile, Marc Short, the former chief of staff to Vice President Mike Pence, has been engaging with the House select committee after he received a subpoena, according to two people who spoke on the condition of anonymity to confirm Short’s actions. In a Nov. 17 conversation with Democratic strategist David Axelrod, Short said he would never believe Trump would have wanted physical harm to come to Pence on Jan. 6, despite rioters outside the Capitol that day chanting “Hang Mike Pence!”

The Washington Post’s Josh Dawsey and Mariana Alfaro contributed to this report.