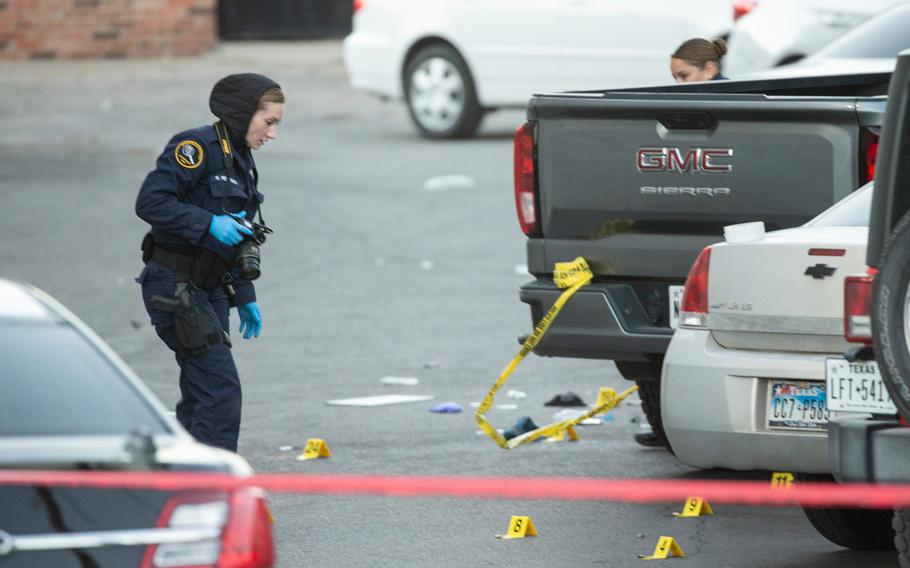 EL PASO, Texas (Tribune News Service) — El Paso police on Monday continued investigating a shooting after a Fort Bliss soldier was killed and three other men were wounded Sunday night outside a bar in the Five Points area.

Two other Fort Bliss soldiers were among the wounded, police said.

The bar is across the street from El Paso Police Headquarters.

The incident began when groups of women who were arguing and fighting were escorted out of the Headquarters bar, police officials said. The fighting continued in the parking lot, with the men attempting to stop the fight.

An unidentified man then “walked up and indiscriminately fired shots at the victims,” a police news release stated. The gunman then ran to a car parked across the street at the public parking lot next to Police Headquarters and fled the scene.

Patrol officers responding to the shooting arrived and found two men on the ground in the parking lot. Two other shooting victims later were located while being treated at hospitals.

There was a total of four shooting victims, a police spokesman said Monday.

The name and age of the slain soldier were not disclosed. The men wounded in the shooting were identified as two Fort Bliss soldiers, ages 27 and 29, and a 22-year-old El Paso man.

An investigation by detectives with the Crimes Against Persons Unit was underway Monday. There had been no arrests.

The deadly shooting on Sunday was the latest violence amid a rise in homicides in El Paso that began last year.

There had been 29 murders in El Paso prior to Sunday, compared with 25 murders in all of 2020, which was a deadlier year than average in the city, according to police statistics.

El Paso has averaged 22 murders a year in the past 10 years. There were 40 murders in 2019, with more than half of those occurring in the Walmart mass shooting.

El Paso is not alone in seeing an increase in violence. Cities across the nation have seen a rise in gun violence since last year amid the COVID-19 pandemic.

Criminologists have said that several factors could be behind the rise in violent crime, including pandemic-related stress, economic hardships and a jump in gun sales.