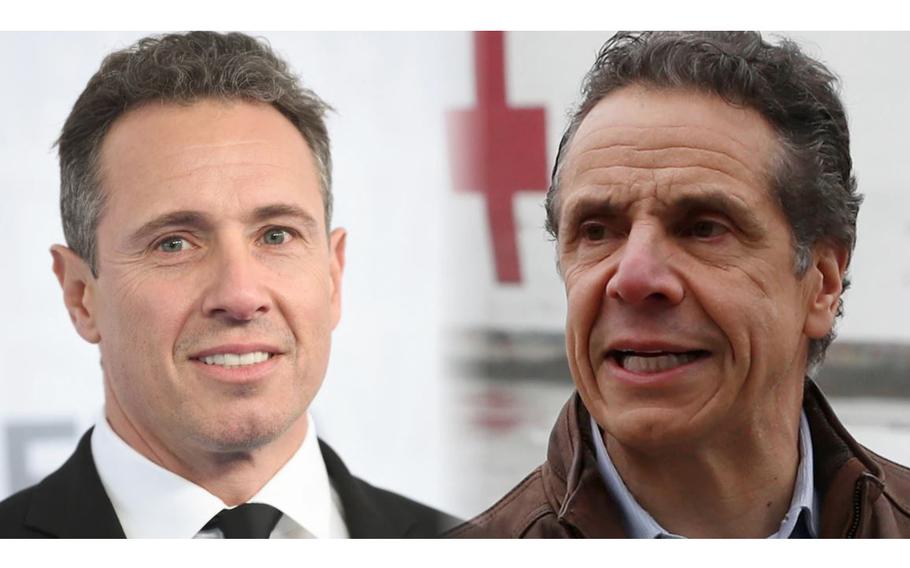 CNN has terminated host Chris Cuomo following an investigation conducted by a law firm that turned up "additional information."

Cuomo was "indefinitely" suspended by CNN on Tuesday, a day after documents released by New York Attorney General Letitia James showed that he was more extensively involved in helping to defend his brother, then-New York Gov. Andrew Cuomo, against allegations of sexual misconduct than he had acknowledged - either publicly or to CNN management.

In a statement on Saturday evening, the network said: "Chris Cuomo was suspended earlier this week pending further evaluation of new information that came to light about his involvement with his brother's defense. We retained a respected law firm to conduct the review, and have terminated him, effective immediately. While in the process of that review, additional information has come to light. Despite the termination, we will investigate as appropriate."

Following his suspension on Tuesday, the 9 p.m. hour on CNN was hosted this week by anchor Anderson Cooper, who extended his normal 8 p.m. show. Next week, Cuomo's time slot is scheduled to be filled by CNN Saturday morning host Michael Smerconish. The network has not announced hosting plans beyond next week.

While Cuomo's suspension led to a round of speculation about whether he will ultimately leave the network, and, if so, who could potentially replace him in the coveted 9 p.m. slot, someone close to the situation told The Washington Post on Wednesday that Cuomo's fate had not been decided and that the network would be guided by the results of the "further evaluation" that it pledged to conduct on Tuesday. If the network had decided that Cuomo could not return, the person said, it would have sought his departure.

However, the network did not say how long the review process would take. CNN's chief media correspondent, Brian Stelter, floated the possibility on air that Cuomo could conceivably return to his show in January.

On his SiriusXM radio show on Wednesday afternoon, Cuomo told listeners that he was "embarrassed" by the network's decision to suspend him, which he said "hurts." He said he would respect the network's evaluation process and stay quiet in the meantime. "I know they have a process that they think is important," he said. "I respect that process. So, I'm not going to talk about this anymore than that."

The 348-page interview transcript and communications records released Monday as part of the New York State attorney general's investigation showed that Chris Cuomo played a significant role in his brother's rapid response operation, drafting up statements for his brother to read and weighing in on strategy debates. Most significantly for his role at CNN, the documents showed that Cuomo leaned on his journalistic sources to glean information about forthcoming articles that could negatively impact his brother and his futile fight to keep the governorship. "When asked, I would reach out to sources, other journalists, to see if they had heard of anybody else coming out," he told investigators, referring to the potential for additional women to accuse his brother of misconduct.

In particular, Cuomo called around to find out about the timing for an article published by New Yorker writer Ronan Farrow, though he didn't call Farrow directly. When asked by investigators whether he had informed CNN management about his outreach regarding the Farrow article, he replied, "No, not specifically." He argued that it was "business-as-usual" for a journalist to call peers regarding the timing of impending articles.

In one message released as part of the investigation, Cuomo messaged a top aide to the then-governor, Melissa DeRosa, to inform her that he had a "lead" about a woman who had accused his brother of improper behavior at a wedding.

"The documents, which we were not privy to before their public release, raise serious questions," the network said on Tuesday. "When Chris admitted to us that he had offered advice to his brother's staff, he broke our rules and we acknowledged that publicly. But we also appreciated the unique position he was in and understood his need to put family first and job second. However, these documents point to a greater level of involvement in his brother's efforts than we previously knew."

A veteran of ABC News, Cuomo was given the 9 p.m. hour in 2018, after a successful run as co-anchor of the morning show "New Day" with Alisyn Camerota.

In the third quarter of 2021, Cuomo's show attracted nearly 960,000 total viewers on an average night, more than any other CNN program.