Abortion wars have raged for decades. They could soon get worse. 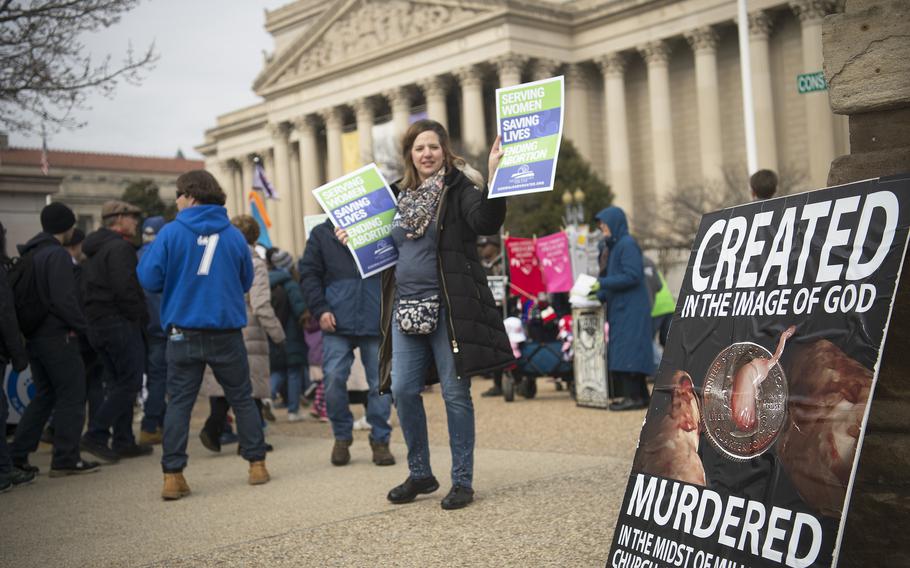 Buy Photo
Anti-abortion activists protest during a March for Life rally on Jan. 24, 2020, in Washington, D.C. (Carlos Bongioanni/Stars and Stripes)

In 1989, the Supreme Court ruled that states were free to begin enacting restrictions on the legal right to abortion. The decision was a galvanizing moment politically for supporters of abortion rights and a catalyst for opponents to test the limits of the court's judgment. The ruling accelerated a battle over the right to abortion that has raged ever since.

Today, the country appears headed toward a far more decisive and divisive moment, on the basis of last week's oral arguments at the Supreme Court over Mississippi's restrictive abortion law, which mostly prohibits abortions after 15 weeks of pregnancy. With obvious caveats, the oral arguments suggested that the conservatives who make up a majority will uphold the Mississippi law and possibly go the full way to overturn Roe v. Wade.

A decision to overturn Roe would forever etch the court of Chief Justice John Roberts in the history books and trigger a political earthquake, potentially redrawing the balance between the supporters and opponents of abortion rights.

It would throw the question of abortion's legality back to the states and into the hands of politicians and the democratic process at a time when democracy itself is fragile and politicians seem in no mood to compromise, especially on an issue as fundamental as this. Inevitably, it would lead to an intensification of the country's cultural wars and a red-blue patchwork of abortion rights and restrictions.

What happened after the 1989 decision in Webster v. Reproductive Health Services might be an imperfect guide to what could be on the horizon, given the scale of a decision to overturn Roe compared with the decision to allow states to restrict abortions. But it provides some clues as to how a charged decision over a volatile issue might resonate politically.

After Webster, the tone of the political debate clearly shifted. Where once abortion rights supporters were tentative and defensive about making the issue central to their appeals, abortion opponents found themselves in a more defensive posture in the new environment. That could be even more the case if Roe is overturned.

The Webster decision had an immediate impact in the Virginia and New Jersey gubernatorial elections that took place a few months after the decision. Democrats Douglas Wilder in Virginia and James Florio in New Jersey effectively used the threat to legal abortion to win their races. Wilder and Florio put the issue front and center in their appeals to voters, and their opponents struggled to find their footing.

The results rattled Republican officials. It was then that Lee Atwater, the chairman of the Republican National Committee, declared that the GOP should be a big-tent party, open to people on both sides of the abortion debate — despite a strong antiabortion plank in the party's platform and the rising power of conservative Christians in the party's coalition.

A year after Webster, in the 1990 midterm elections, the record of abortion's impact was more mixed. Abortion rights supporters pointed to victories in gubernatorial races in Texas, California and Florida, and to success in defeating some ballot initiatives to restrict abortions as evidence of an altered battleground. But antiabortion forces prevailed in gubernatorial races in Ohio and Iowa. In House races, the power of the abortion issue was more uneven.

A post-election analysis in The Washington Post noted, "Abortion, once seen as an issue that could dominate the 1990 elections, played an important but far less sweeping role when the ballots were actually cast, and activists on both sides can point to the results to claim victory."

Apart from campaigns and elections, state legislatures in dozens of states looked at new restrictions. In many places, those efforts failed in the legislatures or were vetoed by governors. A handful of states enacted new restrictions. But that understates the impact. Webster marked the beginning of a process of ever-more-restrictive legislation that could culminate in the court's decision in the Mississippi case.

The political ramifications of the Webster decision obviously pale in comparison to what could happen after a decision about the Mississippi law - and not just because of the enormousness of what is at stake. It's also the timing of the decision. Webster came more than a year before the 1990 midterm elections. The court's decision in the Mississippi case will come only a matter of months before the 2022 elections.

If Roe is overturned, its effect will burn into the fall and beyond as the battle over abortion's legality shifts to states. Where might it be felt in 2022? For starters, look to gubernatorial races in places like Pennsylvania, Michigan and Wisconsin, three states where Republicans control the legislatures and might be inclined to enact restrictive bans on abortion but where the governor's mansions are in the hands of Democrats.

After what happened in the past few years, Senate races, too, will take on new significance because of abortion. Over the past five years, a Republican majority in the Senate showed what could be done to shape the Supreme Court.

First, Republicans led by Senate Leader Mitch McConnell, Ky., blocked President Barack Obama's nomination of Merrick Garland to replace the late Justice Antonin Scalia without so much as a hearing. Then, last fall, McConnell forced through the confirmation of Justice Amy Coney Barrett on an accelerated schedule even as voting was underway in a presidential campaign that saw President Biden defeat then-President Donald Trump.

The impact on House races in 2020 is a bit less predictable. What could be decisive in competitive races will be the power of the women's vote. Republicans believe some suburban women, whose energy helped elect a Democratic House majority in 2018 and helped give Democrats the presidency and Senate in 2020, will shift back in their direction in 2022, as they did in Virginia in Gov.-elect Glenn Youngkin's victory.

Democratic pollster Celinda Lake, acknowledging that Republican, pro-Trump voters are highly motivated, said a decision to overturn Roe would motivate younger Democratic women, many of whom are infrequent voters. Lake said baby boom women are another constituency that could be fired up by a decision to overturn Roe. Unlike younger women, she said, they remember when abortion was not legal and have been skeptical that Roe will be overturned.

The 2024 presidential election is too far into the future for sound analysis, other than to note that the importance of having the power to appoint Supreme Court justices will be far less an abstract issue if Roe is gone.

Public opinion long has supported Roe and the right to legal abortions, albeit with some restrictions. But conservatives who oppose abortion rights have been awaiting this moment for many years. At no time since 1973 has Roe seemed in such a precarious position, given the court's 6-to-3 conservative majority. The country has many months to wait before the court rules, but even now, partisans are bracing for a titanic struggle at the ballot box and at every level of government.