The Florida State Guard was a World War II-era defense force; here’s why DeSantis wants to revive it 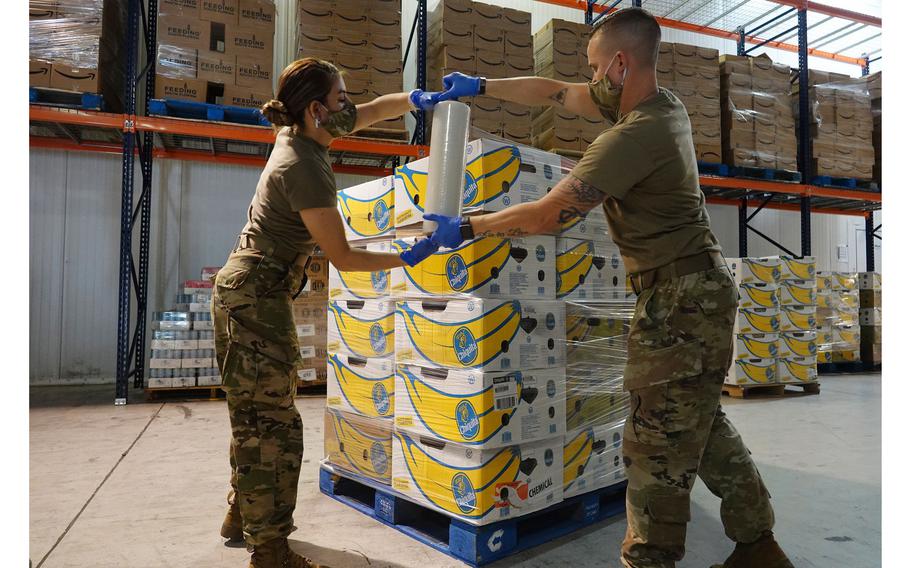 Florida National Guard personnel wrap pallets of food at Feeding South Florida in Boynton Beach in early 2020. The Guard may be getting some help dealing with the aftermaths of hurricanes and other relief efforts as Gov. Ron DeSantis seeks to revive the long-idled volunteer Florida State Defense Force, which was deactivated in 1947. (Joe Cavaretta, South Florida Sun Sentinel/TNS)

DeSantis said he is asking the state Legislature for $3.5 million to reactivate the guard and train some 200 volunteers who would supplement the state’s quick responses during emergencies such as hurricanes.

“We want to be able to have a quick response capability and re-establishing the Florida State Guard will allow civilians from all over the state to be trained in the best emergency response techniques and have the ability to mobilize very, very quickly,” DeSantis said.

DeSantis’ announcement drew pushback from Nikki Fried, the state’s agriculture commissioner and a Democrat who is running for governor. She said Florida “doesn’t need a paramilitary force” that only answers to DeSantis. “Millions of Floridians know what it’s like to live under regimes like this — and came to our state to escape them,” Fried tweeted. “This must be stopped.”

DeSantis’ press secretary, Christina Pushaw, tweeted back at Fried, telling her to “maybe ease up on scaremongering about ‘paramilitaries’ ” and provided a link to a webpage that lists such defense forces in 17 other states, as well as in Puerto Rico.

In October 1940, more than a year before the Japanese attacked Pearl Harbor, President Roosevelt signed the State Guard Act, which authorized the states to create replacement forces for National Guards whose members were destined for overseas service. With war on the horizon, Congress passed the act to allow states to maintain forces other than the National Guard, which had been federalized.

Funded and trained by the states, the guards served under the command of governors.

The state Legislature authorized the Florida Defense Force in 1941.

It was rebranded as the Florida State Guard, and deactivated in 1947, two years after the war’s conclusion.

In 2012, the conservative Heritage Foundation urged the return of the voluntary forces in all 50 states.

At the time, there were 22. In a statement, the governor’s office said Florida’s would be the nation’s 23rd.

The money for the revived state guard is part of a $87.5 million package that would go toward a number of projects, including the expansion of a readiness center in Miramar and establishing new armories in Homestead, Gainesville and Malabar.

The governor is also seeking more than $16 million for armory maintenance; a new headquarters for the National Guard Counter Drug Program, which for 25 years has helped various anti-drug agencies combat illegal drug trafficking and use. The money would also provide financial aid for National Guardsmen pursuing college degrees.

Major Gen. James E. Eifert, the state adjutant general who oversees the National Guard and serves as the governor’s senior military adviser, indicated the revived state guard and additional dollars are critical to support a National Guard that has seen record levels of deployments in the last two years.

Florida’s Guardsmen, Eifert said, “have given back to their communities on an unprecedented scale.”

He said the National Guard has devoted “more time in last two years than the last 20 years” answering calls for help ranging from disaster relief to COVID-19 assistance.

More than 1,500 are now overseas in places including Iraq, Syria, Kuwait and Ukraine. Some are serving in the U.S. border states of Texas and New Mexico.

The budget request proposed by the governor, he added, is the “most substantial investment in the entire history of the National Guard.”