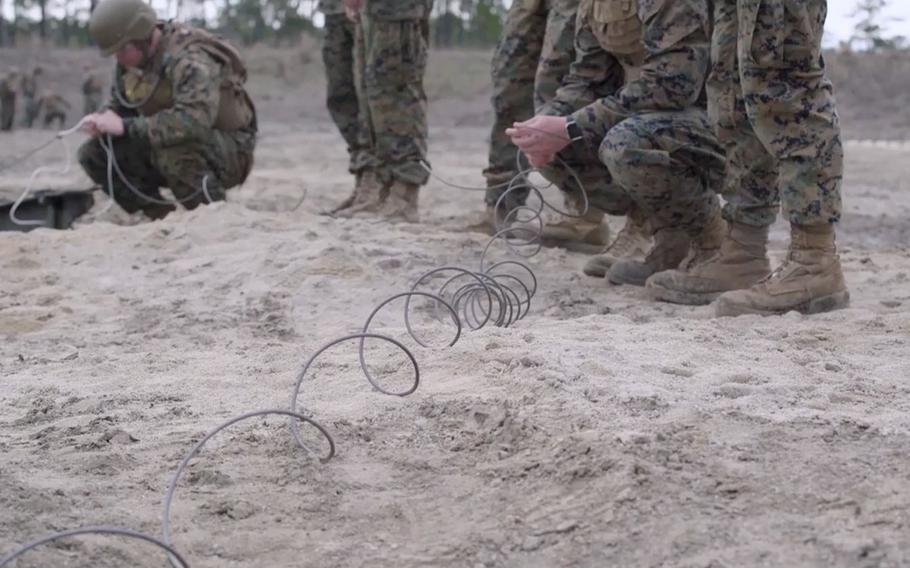 The Marine Corps demolition specialist was worried — about America, and about the civil war he feared would follow the presidential election.

And so, block by block, he stole 13 pounds of C4 plastic explosives from the training ranges of Camp Lejeune.

"The riots, talk about seizing guns, I saw this country moving towards a scary unknown future," the sergeant would later write, in a seven-page statement to military investigators. "I had one thing on my mind and one thing only, I am protecting my family and my constitutional rights."

His crime might have gone undetected, but authorities caught a lucky break in 2018 as they investigated yet another theft from Lejeune, the massive base on coastal North Carolina. In that other case, explosives ended up in the hands of some high school kids.

These are not isolated cases. Hundreds — and possibly thousands — of armor-piercing grenades, hundreds of pounds of plastic explosives, as well as land mines and rockets have been stolen from or lost by the U.S. armed forces over the past decade, according to an ongoing Associated Press investigation into the military's failure to secure all its weapons of war. Still more explosives were reported missing and later recovered. Troops falsified records to cover up some thefts, and in other cases didn't report explosives as missing, investigative files show. Sometimes, they failed to safeguard explosives in the first place.

The consequences can be deadly.

In August, an artillery shell exploded at a Mississippi recycling yard. Chris Smith suddenly found himself cradling a co-worker who was bleeding profusely from his legs. The man died right there.

"For no reason at all," Smith said in an interview.

Two days later, an intact shell was found at the scrap yard.

These were not rusty war trophies cast out of grandpa's attic. They were taken from military shipments or bases.

Military officials said thieves in the ranks are a small minority of service members and that — compared to overall stockpiles — the amounts of lost or stolen explosives are minuscule.

"We want to get the number to zero, so there is no loss, but it doesn't mean that we don't take seriously losses that happened," Pentagon spokesman Lt. Col. Uriah Orland said.

The AP's AWOL Weapons investigation has shown that poor accountability and insider thefts have led to the loss of more than 2,000 military firearms since 2010. Some guns were used in civilian crimes, found on felons or sold to a street gang.

In response, Congress is set to require that the military give lawmakers detailed loss and theft reports every year. One thing those reforms won't do: Make it harder to steal explosives such as C4.

Explosives already are harder to account for than firearms.

While troops check guns in and out, explosives are distributed with the presumption they will be detonated. Although at least two people are supposed to sign consumption reports, it’s an honor system.

Spokespeople for the four armed services described explosives security as a high priority and said they could account for nearly all explosives. The amounts that are missing add up, however, given the military’s vast supplies.

The Army provided a chart that totaled nearly 1,900 entries for missing explosives, about half of which it said were recovered. The majority was described as C4/TNT. Other categories included artillery, mortars, land mines, grenades, rockets and armor-piercing 40 mm grenades shot from a launcher.

Despite a painstaking, manual records review, Army researchers couldn't always determine amounts, spokesman Lt. Col. Brandon Kelley said. So, for example, it was not possible to know exactly how many pounds of C4/TNT were represented in the 1,066 entries, Kelley said.

The Air Force provided a chart that reported about 50 pounds (23 kilograms) of C4, more than 800 feet of detonating cord and several dozen 40 mm armor-piercing grenades had disappeared without being recovered.

The Navy said that only 20 hand grenades have been stolen, with all but two recovered. When the AP produced military investigative records showing an additional 24 grenades were reported missing from a ship's armory in 2012, Navy spokesman Lt. Lewis Aldridge said the case was "beyond the 2-year local records retention requirement."

The Marine Corps released data that was too unclear to calculate a precise tally. AP's rough analysis showed that thousands of armor-piercing grenades and hundreds of pounds of plastic explosives were reported lost or stolen. "Some of it was later recovered and often these reports are attributed to human error, such as miscounts or improper documentation," Capt. Andrew Wood said.

Naval Criminal Investigative Service files obtained under the Freedom of Information Act gave an inside picture of the two insider theft cases at Marine Corps Base Camp Lejeune. 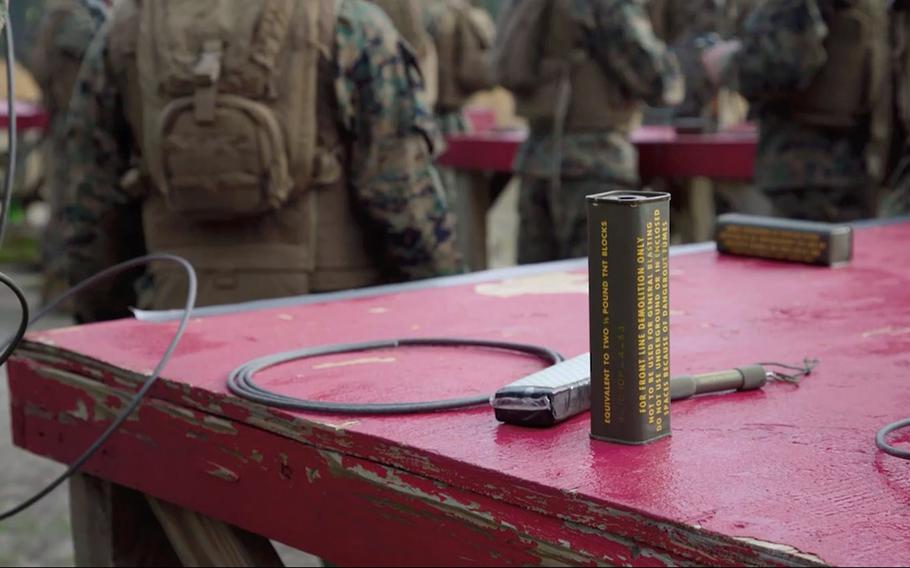 A photo shows a block of TNT as Marines train in the background at Camp Lejeune in Jacksonville, N.C. ( U.S. Marine Corps )

As demolition experts, both had exceptional access to C4.

During the summer of 2016, Sgt. Travis Glosser feared Hillary Clinton would beat Donald Trump in the presidential election, and society might disintegrate. So he began accumulating leftovers until he had what he described as "a respectable amount" of C4 — 10 blocks, weighing nearly 13 pounds.

"I mean, you know how crazy the world is nowadays," Glosser told an NCIS agent in June 2018, when he surrendered.

After Trump won, he buried the explosives until word began circulating that another demolition specialist and sergeant, Alex Krasovec, was being investigated for explosives theft.

Glosser eventually confessed, then led bomb handlers to the munitions.

Both Krasovec and Glosser pleaded guilty to theft of military property. Each was sentenced to less than two years of confinement in military prison, and both were knocked down in rank. Krasovec was booted from the service with a bad conduct discharge; Glosser is appealing his case.

Glosser's wife told the AP he would not comment. Under questioning from authorities, he insisted he never planned to wreak havoc and said he had no ties to a militia.

"At no time did I ever intend or even think about selling, giving, or even showing anyone" the explosives, he wrote. "I also have never had any intent to harm anyone." A photo of a site in Jacksonville, North Carolina, where in June 2018 a Marine Corps sergeant dug up explosives he had stolen from nearby Camp Lejeune and then buried. (Naval Criminal Investigative Service )