Outside the Supreme Court and in Mississippi, advocates on both sides of abortion issue listen to arguments

by
Caroline Kitchener and Sarah Fowler
• The Washington Post • December 1, 2021 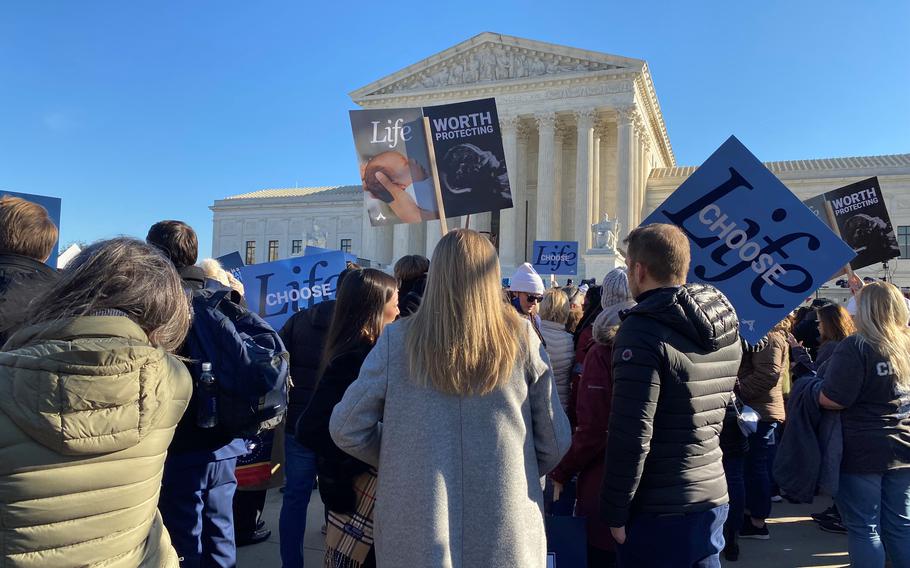 Antiabortion advocates marveled at the opportunity to hear the proceedings live-streamed on large speakers outside the Supreme Court.

“For the first time in history we’re going to be able to hear what’s happening inside the court,” an antiabortion activist yelled. The Supreme Court’s live stream is a new feature that was added during the coronavirus pandemic.

On the other side of a fence, where abortion rights advocates gathered, speakers continued to take the podium, shouting to drone out the solicitor general’s arguments.

“We protest being strong-armed,” said Rabbi Mira Rivera, speaking into a microphone. Then she started chanting: “Justice, justice.”

“It’s loud,” said Sofia Lorincz, an 18-year-old who got up at 2 a.m. to travel from Beckley, W.Va. “But I’m glad that we live in a country where both opinions can be presented, and we are free to state our own opinions.”

Lorincz is thrilled to have the opportunity to hear the arguments in real time, she said.

Meanwhile, more than a dozen supporters of abortion rights gathered in a hotel ballroom in Jackson, Miss., to hear the live stream.

Activists and organizers said they chose to be in Mississippi rather than D.C. to send a message to Mississippians.

Tyler Harden, 25, Mississippi state director for Planned Parenthood Southeast, said people from the states represented by the U.S. Court of Appeals for the 5th Circuit, which consists of Louisiana, Mississippi and Texas, all came to Jackson to “build community.”

“Staying here is a symbolism for us really taking care of the people we serve,” Harden said. “The folks that are most impacted from these abortion bans aren’t able to go to D.C. today. These people are at work right now, taking care of their families and making sure that they’re able to provide for the folks that need them the most, and we wanted to create spaces where they can plug into and watch and be a part of in their own backyards.”

She added, “Oftentimes, we ask people to go out of their way to go to these other places, and we rarely see folks from these different communities come to a place like Mississippi because of all the negative stereotypes.”