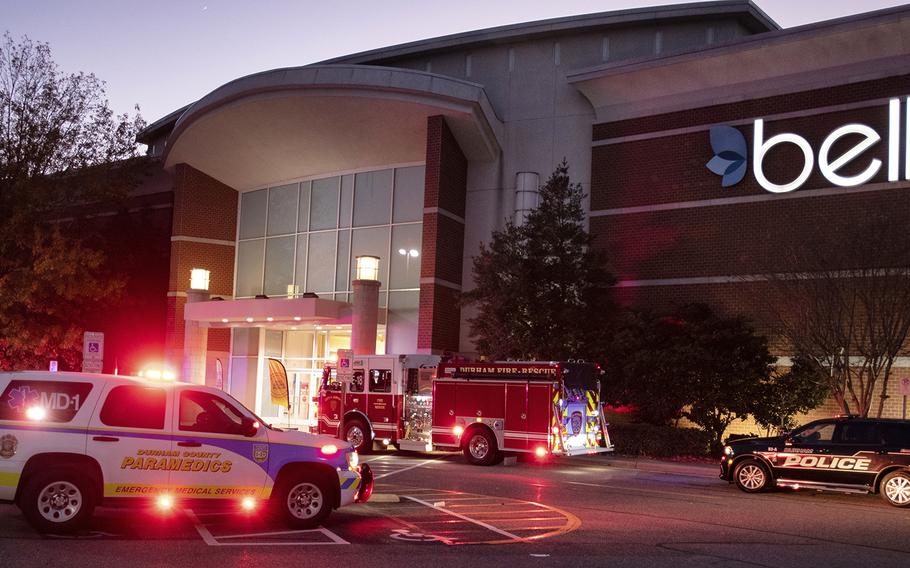 Emergency vehicles congregate around the entrance to Belk at The Streets of Southpoint Mall in Durham, North Carolina, after three people were wounded in an afternoon shooting on Black Friday, Nov. 26, 2021. (Scott Sharpe/Raleigh News & Observer/TNS)

RALEIGH, N.C. (Tribune News Service) — A man shot at The Streets at Southpoint mall in Durham Friday remains in critical condition as of Saturday afternoon, according to Durham police.

Two others who were shot, another adult male and a 10-year-old, sustained non-life-threatening injuries, Durham police said in a news release.

In addition to the three people who were shot, three others were injured in the shooting's aftermath, but also with non-life-threatening injuries, police said.

Police said Friday they have one individual in custody, but no charges have been filed yet in connection with the shooting, which terrified hundreds of shoppers at the mall on one of the busiest shopping days of the year.

The update from police came after the mall reopened Saturday morning with hours from 11 a.m. to 9 p.m. Hours for individual stores and restaurants may vary, the mall's website stated.

Chaotic scenes unfolded at the mall Friday just before 3:30 p.m., when shoppers were startled by sounds of gun shots and ran for the mall's exits. Several reports that shots had been fired emerged on social media as mall-goers cautioned people to stay away from the shopping center, which was quickly evacuated by police.

Durham Police Chief Patrice Andrews later confirmed that three people had been shot, one of whom was a 10-year-old who was hit by a bullet ricochet. The child was taken to the hospital with what appeared to be non-life-threatening injuries, according to a follow-up police news release.

Police provided no information about the others who were shot, but did say three additional people suffered non-life-threatening injuries in the aftermath of the shooting that were not gunshot wounds.

Durham police officers who were working off-duty inside The Streets at Southpoint on Fayetteville Road requested assistance after hearing gunshots around 3:23 p.m., Andrews said during a news conference Friday evening.

The incident, which was reported on the second floor of the mall, involved two groups of people who knew each other, she said.

Many of those people quickly fled, but police do have one person in custody, as well as several witnesses, she said.

At least one weapon was recovered, and Andrews said there are "several people we want to be able to locate and speak with."

Police expect to share descriptions of those involved in the shooting once that information is available, she added.

"We will be making several arrests, I'm certain, during the course of this investigation," Andrews said.

Thirty-eight of those shot this year have died, according to police, up from 25 last year and 30 the year before that.

The Durham County Sheriff's Office and Highway Patrol were brought in to handle traffic and divert drivers from the mall, said City Council member Mark-Anthony Middleton.

"We're doing [an] orderly evacuation," he said late Friday afternoon. "It's really important that we keep the area as decongested as possible."

Middleton said he did not know details about the person being detained or other information about the shooting, which he initially learned about on social media.

Mary Moore, who walks with a cane, said she was at the mall "trying to do my Black Friday shopping when I heard them 'Pop! Pop! Pop!'"

"I had at least gotten my clothes," she said in an interview. "Some people left their bags. I just grabbed my stuff and ran."

Aaron Thomas, a WRAL reporter, said on Twitter he was locked in a store with other shoppers and saw many people running.

"We're waiting to hear from security what prompted this situation," he tweeted.

Shopper Sam Zhan told The N&O in a Twitter message he was walking toward Macy's when he saw more than 100 people, maybe 200, running out of the store.

"Some were yelling 'Shooter!' Zhang said.

"Streets at Southpoint is a destination for the community to gather," it said. "We are saddened and outraged that we were the location for such a senseless act of violence among a group of individuals. Right now we are focusing on the well-being of those impacted by today's incident. We are grateful to the Durham Police Department for their diligence and partnership. We will offer support to their investigation."