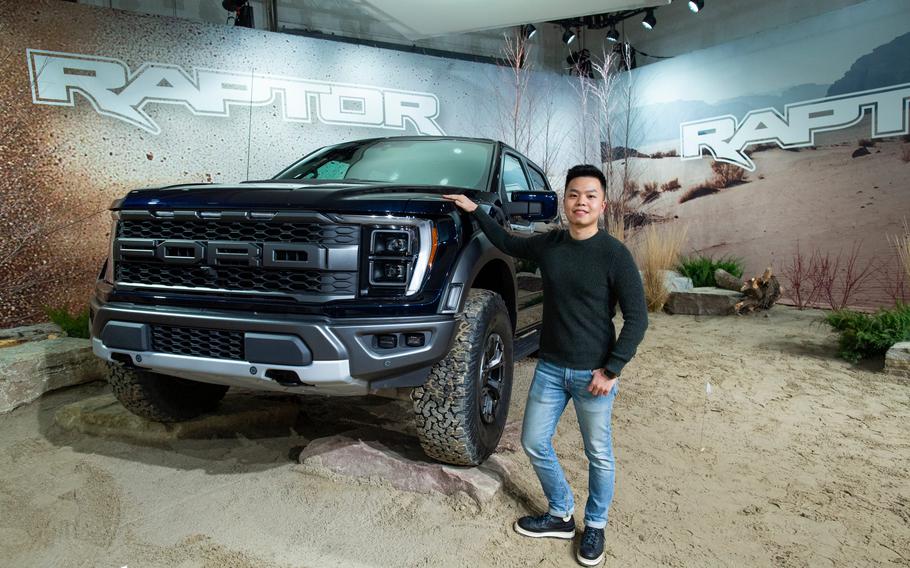 Tom Liu, lead exterior designer for the 2021 Ford F-150 Raptor, stands beside the vehicle in a design studio in Livonia, Mich., in January 2021. With gasoline topping $6 a gallon at some Los Angeles-area stations, motorists and especially heavy-duty truck owners are feeling the pinch. (Ford Motor Co./TNS)

LOS ANGELES (Tribune News Service) — That silver Dodge Ram Warlock with the 5.7-liter V-8 Hemi engine must have looked pretty sweet when gasoline prices hovered around $4 a gallon. Now, with gasoline topping $6 a gallon at some Los Angeles-area stations, a bit of sour's been added to the mix.

Record-high gasoline and diesel prices are combusting driver budgets across the land, small car or large. But filling up a pickup truck or truck-size SUV burns hottest, given the extra weight and lower gas mileage that come as a trade-off for utility and size.

Like many, George Moreno uses his pickup for work. The downtown Los Angeles resident runs a warehousing and logistics company. Heavy-duty trucks do most of the work, but he often uses his Ford F-150 for smaller runs. Fuel costs "are so important to us, definitely," Moreno, 52, said outside the Home Depot. It's hard "to keep our prices at a fair level while watching our costs go up."

At a time of higher inflation, gasoline prices are the most visible manifestation. With a national average of about $3.40 a gallon, the Biden administration is worried — on Tuesday, the president ordered a partial drawdown of the nation's strategic petroleum reserve to put more oil in the market with hopes to reverse the rise in motor fuel prices.

Drivers of pickup trucks are feeling the effects more than others, and their disproportionate pain at the pump reflects major shifts in the design of what are now America's most popular vehicles.

Opt for the Silverado LT Trail Boss, with the crew cab and heavier engine and other options, and the scale rises to 5,155 pounds, up 46% from the 1960 model.

The trucks are a lot taller too. In 1960 the average American male stood at 5 feet, 8 inches. In 2020, 5 feet, 9 inches. The Chevy pickup over those years has grown from 5 feet 9 to nearly 6 feet 6. Hoods are taller too. The hood of the F-250 Super Duty stands at 55 inches, shoulder high to many adults and taller than an average 8-year-old.

Automakers consider those high hoods as substantial selling points. General Motors designer Karan Moorjani put it this way in a 2019 Muscle Car & Trucks article about the GMC Sierra HD pickup: "We spent a lot of time making sure that when you stand in front of this thing it looks like it's going to come get you. It's got that pissed-off feel, but not in a boyish way, still looking mature. It just had to have that imposing look."

Automakers have made tremendous progress toward improving fuel consumption in these trucks, using lighter materials and more-efficient engines. But the huger dimensions work against the gains in fuel efficiency. As the International Energy Agency notes in a report this month, "size and weight is a key determinant of fuel consumption."

Average mileage for sedans reached 30.9 miles per gallon in 2019, according to the U.S. Environmental Protection Agency, up from the low 20s in the early 1980s. The average for pickup trucks, meanwhile, has remained nearly flat since the 1980s: 19 mpg. Put a trailer load on today's biggest pickups, and that mileage drops to single digits.

Yet, last year, more pickup trucks were sold than cars in the U.S. for the first time. The popularity of pickups isn't hard to understand. What was once a farm and worksite piece of equipment has become an everyday vehicle that fits nicely into the lifestyle of millions of Americans. Pickups used to drive like washboards. Now with modern suspension systems they drive like cars.

In the age of Home Depot, they can accommodate big pieces of wood for home remodeling projects. In the age of Costco, they can easily fit an entire grocery run in which every item is bought in bulk.

Whether their appeal fades rests on the question of how high fuel prices will get and how long they will stay there.

Decades' worth of studies have shown that significant increases in fuel costs do influence vehicle purchase decisions — if those price increases are expected to remain for six months or more.

A 2020 study at MIT determined that a $1-a-gallon increase in gasoline prices, if expected to stick in the future, causes the average buyer to choose a vehicle with mileage that's a few percentage points better. The individual fuel savings is small, but across the 124 billion gallons of motor fuel consumed each year in the United States, it adds up.

The only group not nudged into more efficient vehicles by significantly higher gas prices was "those who do not consider the environmental friendliness of the vehicle to be at all important in their purchase decision," according to study author James D. Ruckdaschel.

How many of those are pickup buyers, the report does not say. Rising sales, though, show that millions of Americans love their big pickups. Emphasis on "big."

The tension between the environment and low gas prices, like almost every important issue in recent years, has become political and contentious.

The high-wire act is apparent in the Biden administration's attempts to address global warming while softening fury over high gas prices. First Biden ordered cutbacks in U.S. oil and natural gas production. Then he pleaded with Saudi Arabia to open the oil spigots to drive prices down. Not long after Saudi Arabia said no, he uncorked the strategic petroleum reserve.

Next year, Ford will begin selling its F-150 Lightning all-electric pickup truck, a vehicle that looks pretty much like a gas or diesel F-150 but with no tailpipe emissions. Chevrolet and Ram have similar plans. Ford reports heavy demand for the electric truck, based on preorders. A move to electric would help solve climate and gas price problems.

But it's unclear whether pickup buyers will migrate to electric models.

Pickup driver Jon Rannells, 49, said he's thinking about reducing his family's dependence on his Nissan Frontier, which he needs to haul tools and materials.

"We renovate houses in the desert," he said. "I would keep (the truck) because I need it for work sometimes. But otherwise, we've got two kids, so just for shuttling kids — I mean, I just squished my two kids in this (the Frontier) to go to the doctors, and it was ridiculous."

He's thinking about a Prius.