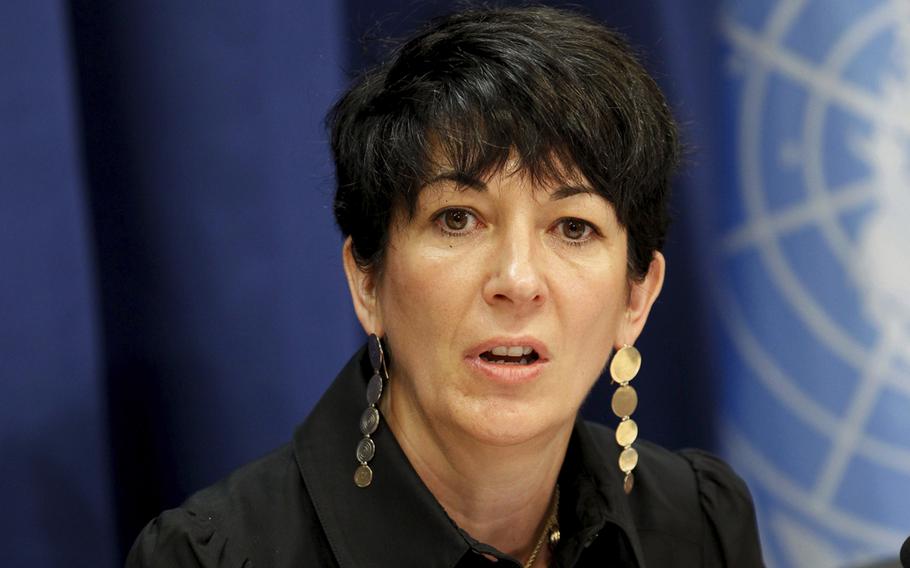 Ghislaine Maxwell attends a briefing at United Nations headquarters on June 25, 2013. Despite his suicide, disgraced financier Jeffrey Epstein will still be put on trial in a sense in the coming weeks by a proxy: his former girlfriend, Ghislaine Maxwell, who is to go before a federal jury in Manhattan in late November 2021, on charges she groomed underage victims to have unwanted sex with Epstein. (Rick Bajornas/United Nations )

NEW YORK — Jeffrey Epstein's death by apparent suicide more than two years ago left dozens of his alleged victims without the closure they hoped his sex-trafficking trial would bring.

In the coming days, those young women will have a chance to see Epstein's alleged accomplice - his former paramour and longtime companion Ghislaine Maxwell - tried on charges related to her alleged role in their abuse.

Epstein was an ultrawealthy investor and jet-setter who socialized with the likes of Prince Andrew and former presidents Bill Clinton and Donald Trump. He is remembered as a villain who introduced impressionable and often troubled girls into his world of luxury and riches, only to groom them for a regimen of sexual abuse.

The Manhattan U.S. attorney's office has painted Maxwell, 59, as an active participant in bringing a stream of girls to Epstein's estates in Palm Beach, Fla., New York, New Mexico and elsewhere. Many came forward years later, as young women, following an expansive investigation of Epstein by the Miami Herald in 2018.

Maxwell has pleaded not guilty to sex trafficking and related charges, and describes herself as a former employee of Epstein's who was focused on managing his portfolio of lavish properties around the world.

Maxwell's trial is set to open Monday in the U.S. District Court in Manhattan, just steps from the Lower Manhattan jail where Epstein was found hanging in his cell on Aug. 10, 2019. Jurors from a qualified pool of nearly 60 candidates will be empaneled after lawyers from both sides assert challenges to dismiss a number of prospects.

The final dozen jurors, plus alternates, will sit for what is expected to be a six-week trial, masked and socially distanced in a pandemic-era courtroom setting.

Among the witnesses who will testify are four alleged victims,who will take the stand under pseudonyms, per a ruling by U.S. District Court Judge Alison Nathan. Other witnesses will also be permitted to testify without their names being revealed publicly, because identifying them could also identify the alleged victims.

Prosecutors will say Maxwell helped to "normalize" the girls undressing in Epstein's presence at his Palm Beach mansion, recruiting them with the promise of earning top dollar to give massages, prosecutors say. When Epstein began demanding sexual acts, prosecutors allege, the teens felt trapped and powerless to say no.

According to Maxwell's indictment, she "facilitated" the girls' appointments with Epstein "knowing that he had a sexual preference for underage girls and that he intended to engage in sexual activity with those victims."

Maxwell's attorneys are expected to call psychologist Elizabeth Loftus as a witness. Loftus, a "false memory" specialist, testified for the defense at the rape and sexual assault trial of film producer Harvey Weinstein about how memories can become distorted. Weinstein was convicted on multiple charges in New York last year and sentenced to 23 years in prison.

Juror candidates who have made it to the final round of selection have sworn they can be fair despite the enormous amount of publicity both Epstein and Maxwell have received. During a voir dire process that began in mid-November, many prospective panelists said they knew very little about Epstein and Maxwell, although a number of them recalled hearing news of Epstein's jailhouse suicide.

Maxwell, the affluent daughter of once-prominent media mogul Robert Maxwell, who died mysteriously 30 years ago, has sought to distance herself from Epstein and his misdeeds. She was arrested in July 2020 at a remote property in New Hampshire.

According to an indictment filed then, Maxwell had "enticed and groomed multiple minor girls to engage in sex acts with Jeffrey Epstein, through a variety of means and methods" in the 1990s.

A superseding indictment filed later charged Maxwell with additional counts of sex trafficking of a minor and sex trafficking conspiracy. It referenced a 14-year-old victim who allegedly was brought into Epstein's circle by Maxwell around 2001.

Maxwell's family has said publicly in recent months that she is being unfairly targeted. Lawyers for the former socialite, who have tried repeatedly to get her released from pretrial detention, accuse prosecutors of using Maxwell and a case against her as a proxy for Epstein's unresolved prosecution.

Epstein's arrest in 2019 was seen as an important chapter in the #MeToo movement's exposure of longtime sexual abuse by rich and powerful men. It also was a key second chance for authorities to hold him accountable after an earlier blunder by Justice Department officials in Florida.

In 2008, a police investigation uncovered rampant sexual abuse of local girls as young as 13 at Epstein's Palm Beach property. A controversial plea deal, worked out under the supervision of then-U. S. Attorney Alex Acosta, allowed Epstein to serve about a year in a local jail, with significant time spent outside of the facility on a work-release. Acosta later served as Labor Secretary under President Donald Trump.

Epstein's death at the Metropolitan Correctional Center, a Bureau of Prisons facility, sparked a probe that led to the arrest of two guards. They were charged with altering records to cover up their failure to do required checks at the jail the night Epstein died.

In August, the bureau announced the MCC would close, and its remaining inmates would be relocated. Complaints about health and safety concerns there had been piling up for years.

Maxwell, who is being held in a Brooklyn federal jail that is also known for its poor conditions, is slated to be tried separately for perjury counts that are contained in her indictment. She is accused of lying in depositions in a civil case brought by Virginia Giuffre, one of Epstein's accusers.

A trial date for the perjury matter has not yet been scheduled.