LOS ANGELES — Souleyman Adam Bourma was 17 when he sought refuge in the sprawling Goz Amer refugee camp in eastern Chad, home to more than 250,000 Darfuris who have fled war in their homeland.

For half his life Bourma, once a farmer, has known no life beyond the camp’s boundaries — and had little reason to believe he ever would. Then he found soccer. Or more appropriately, soccer found him when Gabriel Stauring and Katie-Jay Scott, two South Bay, California, activists, showed up in Goz Amer with a soccer ball.

Bourma is among 22,000 refugees in 20 countries, from Chad and Tanzania, to Greece and the Central African Republic, who saw their lives changed since Stauring and Scott launched the Refugees United Soccer Academy in 2013. Now the future of that program is uncertain after a fatal four-car traffic accident Tuesday in Manhattan Beach that took the lives of Stauring, Scott and an elementary school principal, Christian Mendoza.

“A measure of what they left behind is the hundreds of people who’ve reached out to us in the last 24 hours and just said, ‘What can I do?’” said Ben Grossman, a member of the board for iACT, the nonprofit organization Stauring and Scott founded to fund work like Refugees United.

“They did so many things that didn’t have a formal title,” Grossman said. “They would consult on massively important projects, some of which they couldn’t talk about because they were so dangerous.”

Burgeoning crises all over the world led many humanitarian organizations to move on from Darfur, the western Sudan region that was the flashpoint for a war and ethnic cleansing against mostly poor non-Arab Sudanese that began nearly two decades ago. But Stauring and Scott stayed, doubling down on their work with the Refugees United Soccer Academy and other programs such as the Little Ripples childhood development program.

“We chose to go to the difficult places, the forgotten places,” said Stauring, who was 55. “Everyone left Darfur and we said we’re not going to leave.”

Stauring first visited Darfur in 2005 and returned 31 times to work with refugees, many of whom were born in the camps. He met Scott in Portland, where she was doing advocacy work on Darfur. When she asked to join the fledgling aid program he had created he agreed, providing she could raise her own salary.

She did, accompanying Stauring to Africa for the first time in 2008, a trip that was interrupted by an attempted coup. Two years later they were married and settled in Redondo Beach, where they marked their 11th wedding anniversary in September by holding an iACT fundraiser.

Stauring and Scott, who grew up in Mexico and played college soccer at the University of North Carolina, Wilmington, introduced the sport to the camps in 2012, taking Team Darfur, a squad of adult Sudanese men, including Bourma, to an international tournament. Players gather during the launch of the Darfur United women's team at refugee camp Djabal in eastern Chad in 2019. (iACT/TNS) 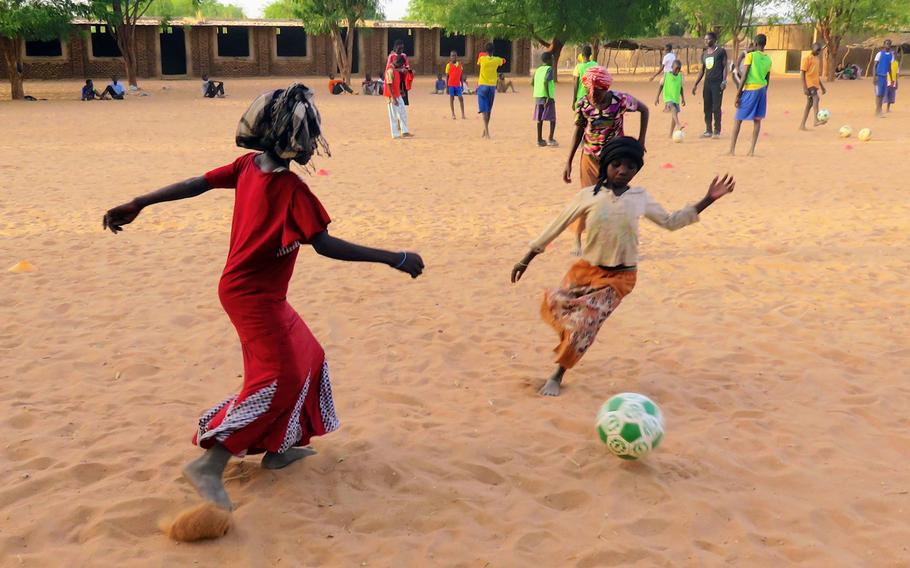 Children play at the Refugees United Soccer Academy in Eastern Chad in 2015. (iACT/TNS)

The men struggled on the field but the concept took hold, so a year later the couple launched an academy for children. And while they kept their promise to never leave Darfur, they did expand the program to Burundian refugees in Tanzania, Central Africans in Cameroon and thousands of others in need, work that was organized and administered by a Southern California-based staff of five with an annual budget of less than $1 million.

The academies, designed to accommodate up to 2,000 children who train or play for 60 to 90 minutes a day, five to six days a week, are primarily aimed at boys and girls 6-13. Next March, 10 girls between the ages of 13 and 17 were scheduled to travel to the Street Child World Cup in Qatar where teams representing 21 countries will compete in a 7-on-7 tournament while learning to advocate for themselves on issues such as access to education and other basic needs. That trip is now uncertain following Tuesday’s accident.

What Stauring and Scott, who was 40, lacked in financial resources they more than made up through the commitment and passion they inspired.

“They made the world better. They made me better,” said Alecko Eskandarian, a former professional soccer player and ethnic Armenian who was working with iACT to bring a soccer program to his war-ravaged homeland. “How they essentially seek out people who need help, to see their passion, their selflessness was almost too good to be true.

“It’s such a tremendous loss for all of us. If you had more people like that who were just willing to drop everything to go help others, we’d be in a much better place.”

Taking soccer to refugee camps where food, clean water and housing are in short supply might seem like a case of misplaced priorities, but it was the opposite. Not only was the game cheap and easy to organize, but it taught skills like teamwork and built traits like confidence and self-esteem. It also empowered girls and the women who coached them to make decisions for themselves.

“It changed my life totally because I learned more important things like respect, truth, relationships,” said Bourma, a Refugees United coach and coordinator who experienced unimaginable violence during the height of the conflict in Darfur. “I became part of the world. For me, soccer is the future of Darfuri children.”

A recent grant from the UEFA Foundation for the Children was to fund academies in four more camps, increasing the global reach of a program that started when Stauring and Scott took a single soccer ball to a dusty corner of eastern Chad nine years ago. That expansion has been put on hold as iACT’s board figures out how to replace its irreplaceable leaders.

“They were the lifeblood of it. They were great people. They were passionate. They gave great hugs, physically and philosophically. You just wanted to he around them,” Grossman said of Stauring and Scott, who leave behind a 9-year-old daughter, Leila Paz, and an 18-year-old son, Gabo.

“They would want it to go on. They worked too hard and touched too many lives to just have it end now.”

To learn more about the program or to help, go to https://www.iact.ngo or info@iactivism.org