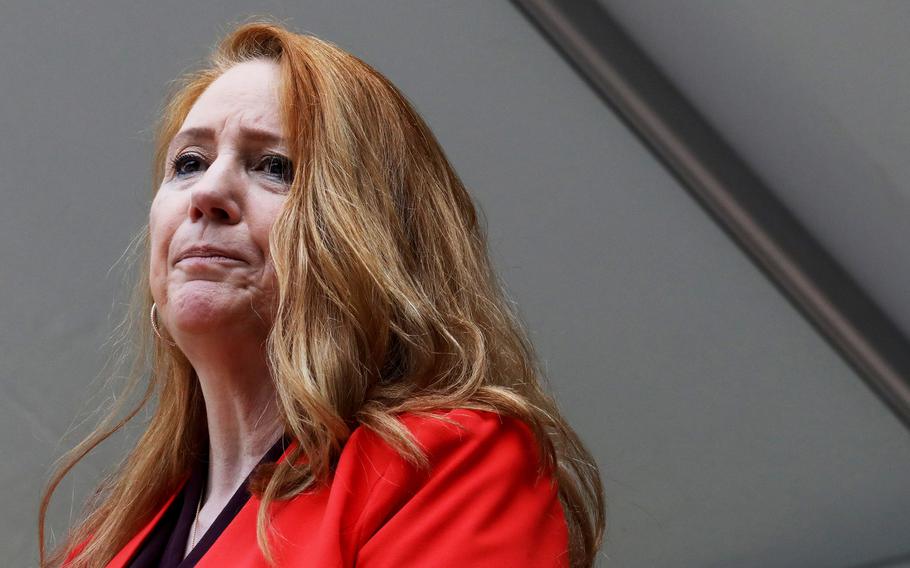 OLYMPIA, Wash. (Tribune News Service) — Sitting in Washington’s secretary of state’s office in the Capitol on one of her last days of work, Kim Wyman shows off a trio of mantra bands on her wrist.

Made by a friend, one reads “remember why you started” to represent some of her turbulent battles as the state’s chief election officer. A second one, for her battle with cancer, reads “choose joy.”

“And ‘make waves’ was for the next journey,” said Wyman of the third band, during a recent interview.

That next journey begins this week, as Wyman and her husband arrive in the other Washington for her new job: as a key election security official in President Joe Biden’s administration.

With her oath of office taken, she’ll serve as the senior election security lead for the Cybersecurity and Infrastructure Security Agency (CISA).

A branch of the U.S. Department of Homeland Security, CISA is central to efforts to protect voting systems from interference by foreign governments, and bad actors in general.

“The real draw, as corny as this may sound, is protecting and defending the Constitution,” Wyman told The Seattle Times. “This is work that you get to do to protect our nation’s election system, which is a constitutional pillar of our democracy and our republic.

“And I just want to make sure that we get through this really rough road that we’ve been on for a couple of years,” she added. Wyman is no stranger to CISA, which has a mission of working with state and local election officials to improve physical security and cybersecurity. Ever since the 2016 election — which culminated in Russia’s interference — officials like Wyman have been working with CISA to shore up election security.

“She was with us, pushing us from day one, when I stepped in the door in 2018,” said Matt Masterson, who held the election lead job until December 2020.

The selection of Wyman, a Republican elected official with extensive local and state election experience, said Masterson sends “the exact right message in this time of partisanship.”

But the challenges are only growing steeper, said Masterson, now a nonresident policy fellow with the Stanford Internet Observatory at Stanford University. Election officials are struggling to counter the rise of disinformation and misinformation, which spreads far and quickly through social media platforms.

Along with the ongoing need for election security, said Masterson, election officials and CISA must now find ways to communicate and build trust with voters to demonstrate that elections are predominantly free of fraud.

“That’s a harder challenge to be honest,” said Masterson.

Washington’s secretary of state supervises a variety of matters other than elections.

It oversees the registration of corporations and nonprofits, as well as both the state archives and the state library. The officeholder is also second in line — behind Washington’s lieutenant governor — to succeed the governor.

Wyman counts as accomplishments an update of the agency’s filing system for businesses and nonprofits, which until a few years ago still required people to file paperwork in Olympia.

She’s also satisfied with her nearly decadelong quest to build a new state archives and libraries building, a project that is funded and now in the design phase: “I’m disappointed that I don’t get to see that project through.”

But since 2016, elections have become an increasingly dominant role. Wyman worked to create an elections cybersecurity operations center, which helped local election officials in Washington’s 39 counties.

Perhaps the biggest and toughest task was the design and implementation of VoteWA, a new voter-management database that also allows election officials to administer the state’s relatively new, same-day voter registration law.

Though it had a bumpy rollout in early 2019 — including some criticism from county elections officials — the system ultimately worked well in that year’s elections and performed solidly in the 2020 elections.

“VoteWA in every sense is something I’m proud of, because I think it was a game-changer that we needed on every level ... and it worked well,” she said.

She decided to take the job after CISA reached out to her a few months ago, said Wyman, who added that she didn’t know the agency’s new director, Jen Easterly.

Wyman now wants to use her new role to continue helping states and local officials work with cybersecurity capability to protect voting systems.

“I’m talking as a secretary of state, but I think about the clerk in the middle of Iowa who has 3,000 voters, and they’re doing other jobs, they issues recorded documents or license tabs or something,” she said. “How do they have time to find out what the threats are coming from around the world, or domestically?”

Wyman’s departure also leaves Republicans without a single statewide elected official on the West Coast of the U.S. mainland.

Hobbs — who has no experience overseeing elections — has said he’ll run for election for the seat next year, the winner of which will then serve the remainder of Wyman’s term.

Wyman has praised the selection of Hobbs, but said, “I hope we see people with election experience enter the race.”

“I think there are some very qualified county auditors and election officials that certainly could do the job well, and are ready to,” she said.

Wyman has held office long enough to see the GOP’s moderate wing ebb in Washington, and see the rise of those like Loren Culp, the party’s unsuccessful candidate last year for governor.

After losing that race, Culp sued Wyman with allegations of widespread election fraud irregularities. But the lawsuit was withdrawn after his attorney faced the threat of legal sanctions for making meritless claims.

Wyman recounts joining the party decades ago because of former President Ronald Reagan, and the principles of strong national defense, limited government, low taxes and rule of law.

Her new role is a nonpartisan job, and subject to the Hatch Act, which limits partisan involvements — and Wyman said she is looking forward to that dynamic, too.

In the meantime, Wyman said she hopes the Republican Party can “get back to principles, rather than just focusing on individuals.”

“You know, the party of Lincoln and the party of Reagan is about something much bigger than any one of us,” added Wyman. “But I do hope that the party can get back to the principles it was founded on.”