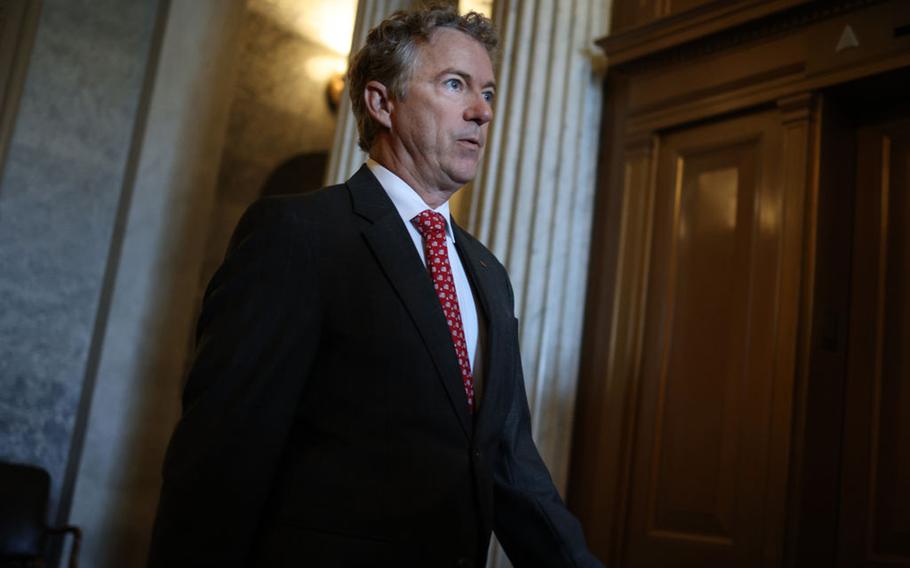 WASHINGTON (Tribune News Service) — When progressive House Democrats fought a vote to pass aid for Israel’s Iron Dome defense shield, the outrage among both mainstream Democrats and Republicans boiled over.

Florida Democratic Rep. Ted Deutch asserted that the opposition permitted “the dismantling of the one Jewish state in the world.”

In the end, just 4% of House Democrats — eight in total, along with one Republican — Kentucky Rep. Thomas Massie — voted against the $1 billion defense appropriation in September.

But in the two months since then, the Senate’s taken no action to finalize passage.

And Jewish Democrats are largely blaming one man: Rand Paul.

“That same level of outrage has not been directed toward this one senator: Rand Paul,” said Halie Soifer, CEO of the Jewish Democratic Council of America. “Rand Paul’s hold is far more consequential than those eight no votes put together.”

This week, the JDCA blasted an email to its national list of around 25,000, lambasting Paul and urging its members to mobilize against his position.

“Every Democratic Senator supports this funding, but Israel still has not received this crucial aid because of Republican obstruction.

Republican leaders like Mitch McConnell are abdicating their responsibility to stop Rand Paul from blocking these funds, demonstrating their blatant hypocrisy on this issue,” reads the missive.

A second group, Democratic Majority for Israel, has also targeted Paul this week.

Paul objected to unanimous consent passage of the funding in an attempt to extract a condition that the $1 billion for Israel come out of the $3.6 billion remaining allocated for the reconstruction of Afghanistan, which the U.S. military departed in August. (In the Senate, any single senator can hold up another senator’s request.)

That money was appropriated before the Taliban’s takeover of the country and Paul wants to ensure those dollars aren’t spent on a faction that America was at war with for 20 years.

President Joe Biden’s administration has frozen Afghanistan’s assets and said it would continue to deny the Taliban funding, but hasn’t ruled out eventually sending money to the regime depending on its actions and commitments it makes to the international community.

“The only people standing in the way of funding Iron Dome are the Democrats who are absurdly blocking Dr. Paul’s GOP-supported efforts to fund it with money that would otherwise end up in the hands of the Taliban,” said Paul spokeswoman Kelsey Cooper.

The JDCA’s Soifer calls that position “baseless and laughable,” noting that the remaining funds allocated to Afghanistan are being used primarily for finalizing America’s withdrawal and the resettlement of Afghan refugees.

“It is not going to the Taliban,” she said.

And if many Republicans support Paul’s move, they aren’t vocalizing it.

A spokesman for Senate GOP Leader Mitch McConnell did not respond to an inquiry on whether he’s spoken to Paul about releasing his hold on the funding. And Sen. Lindsey Graham of South Carolina told Politico last month if Paul’s hold isn’t released they’ll just have to use the legislative process. “There’s probably 90-plus votes for this,” he said at the time.

The most likely outcome? The Iron Dome funding gets stuck into a larger end-of-the-year omnibus spending bill that will ultimately pass at the end of December.

Paul hasn’t indicated he’d go so far to object to this process and risk shutting down the government over funding. Israel’s Iron Dome defense system protects its people from more than 90 percent of rockets launched by Hamas, according to one estimate.

Soifer’s central argument is that the continued U.S. role in that defense should’ve been expedited sooner.