People say they hate gerrymandering, but that isn't stopping Republicans or Democrats this year 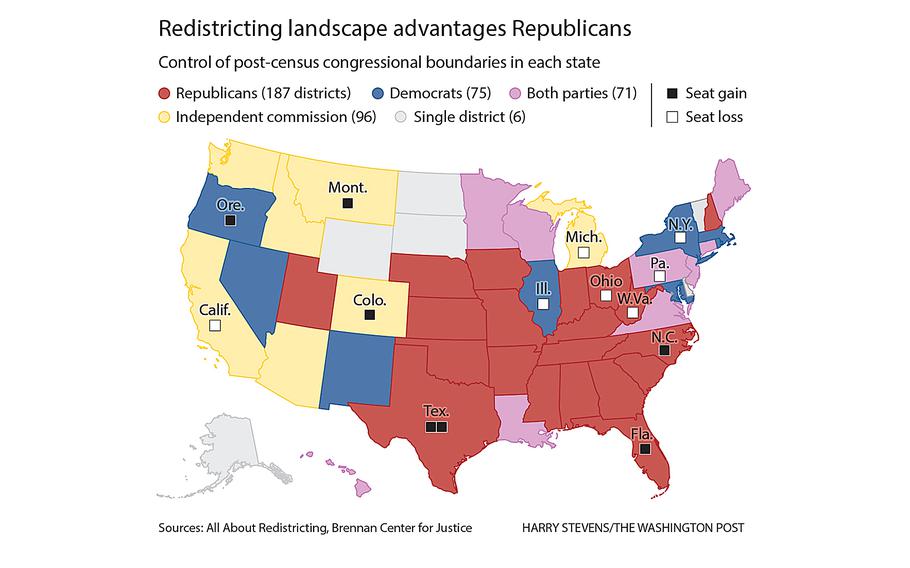 WASHINGTON - Gerrymandering is the root of much that is wrong in politics, or so many Americans believe. But left in the hands of politicians - politicians of either major party - the opportunity to use the process of drawing congressional and legislative district lines for partisan gain is irresistible. The current round proves the point.

Redistricting is playing out against the backdrop of next year's crucial midterm elections. Given the Democrats' slender majority in the House, what happens in the state-by-state process of line-drawing will influence the ultimate results. The general political climate will have a greater impact on whether Republicans take control of the House, but redistricting alone could put them on the edge of a majority, regardless of anything else.

As a result, in states where they have the power to act largely unimpeded, both Republicans and Democrats are practicing the dark art of gerrymandering. "A number of states are likely to take gerrymandering to pretty farcical extremes," said David Wasserman of the Cook Political Report with Amy Walter. "Republicans will gerrymander more than Democrats because they have more power, but because neither Congress nor the Supreme Court has stepped in, it remains this never-ending game of one-upmanship."

Republicans have drawn aggressive maps in Ohio and North Carolina. Both maps have received grades of F on the partisanship scale from the Princeton Gerrymandering Project, which keeps a running analysis of redistricting activity. In North Carolina, Wasserman said, the map could enlarge what is now a split of eight Republicans and five Democrats to 11 Republicans and three Democrats. (The state added one seat from reapportionment.)

Republicans have used their power to draw a congressional map in Texas that will continue to keep themselves with a firm grip on the delegation - doing so while ignoring the changing demographics of the state. Nearly all the population growth in Texas over the past decade has been from people of color, and because of that growth Texas was given two more congressional seats through reapportionment. But the two new districts appear to put their fate into the hands of White voters, rather than Hispanics.

When Democrats controlled many more state governments, it was the Democratic Party that used the redistricting process to its advantage. In the 1980s, Phil Burton, then a powerful California House member, boasted about one mangled district he had helped to engineer, calling it "my contribution to modern art."

The last round of map drawing came after the 2010 elections, when Republicans had seized power in the states. GOP legislators used that power to enact maps that were prime examples of partisan gerrymandering. But when the issue went to the Supreme Court, the justices said they had no power to affect partisan gerrymandering. So today there are no limits on the ambitions of the mapmakers.

The Republicans' handiwork after the 2010 census set off a wave of reactions, with Democrats in particular - elected officials and party activists - lamenting the impact of gerrymandering. In their proposed legislation to change voting laws, congressional Democrats have included redistricting reform as a central element. But the legislation cannot pass in the Senate without a change in the filibuster rules.

Absent such action, Democrats in the states are practicing the old politics. "What we're seeing this cycle is that both parties are engaging in egregious behavior, which was not the case in the last cycle," said Adam Podowitz-Thomas, senior legal strategist at the Princeton Gerrymandering Project.

A new congressional district map in Illinois, where Democrats are in control, is awaiting expected approval from Democratic Gov. J.B. Pritzker. The map is a work of art designed to entrench Democrats in power for the next decade and keep the state's Republican congressional delegation to a minimum.

The Princeton project gives this map three grades of F: one for giving Democrats a partisan advantage, a second for a lack of competitiveness in the districts and a third for making a geographic hash with districts that are not compact and do not respect county or other boundaries. No other state that has been graded so far has received three Fs.

The party's mapmakers were urged by some national Democrats to be even more aggressive - to produce a 15-to-2 Democrat-Republican split rather than the 14-to-3 split that the redistricting experts say will result. But it nonetheless goes to extreme lengths to assure Democratic dominance for as much of the next decade as possible.

One example is the new 17th Congressional District, which is anchored in the northwestern part of the state but snakes its way into parts of central Illinois as needed to corral more Democrats. The district brings together cities with a history of Democratic support, areas of past union activity and college towns where Democrats do well. Meanwhile, the district carefully slices away some surrounding rural areas that have grown increasingly Republican.

The new 17th District was featured in a recent New York Times story explaining the redistricting process. "It's exhibit A of masterful map writing to maximize your advantage," said Robin Johnson, who teaches political science part-time at Monmouth College in Monmouth, Ill.

Donald Trump twice won the old 17th District as a presidential candidate, albeit by narrow margins. Democratic Rep. Cheri Bustos, who currently holds the seat, saw her victory margin shrink from 24 points in 2018 to four points in 2020. The newly drawn district is more Democratic in its leanings than the old. Bustos would be narrowly favored to win it, but she announced earlier that she will not seek reelection in 2022. Democrats have done as much as they could to hold the seat even in what could be a tough year in 2022.

There are other districts in Illinois and elsewhere whose shapes are in the spirit of Elbridge Gerry, the Massachusetts politician (and later vice president) who as governor approved a redistricting map in the early 19th century that included a district shaped like a salamander. Forever after, such districts have been described as gerrymanders. But even districts that do not look irregular can be described as gerrymandered, thanks to the precision and horsepower of today's computers.

There have been calls for reforms to the process for years, and in some states the maps are drawn by commissions rather than legislatures. California was one of the first to create a citizen commission. But there is no uniform standard for such commissions and some have become paralyzed by partisanship. Colorado's commission produced a map so fair and competitive that some Democrats wonder if they gave up too much power.

The redistricting process is far from over, with one of the biggest wild cards being New York, where Democrats could produce a map that would significantly reduce Republican representation in Congress. And there are legal challenges or likely legal challenges that could affect the overall impact of this cycle's work. The Cook-Walter redistricting report estimates that as of now, Republicans would add a net of two or three seats. Wasserman said his estimated range for GOP gains is between zero and five, the upper number being just enough to flip control of the House.

Whatever the outcome, this round of redistricting is likely to have another deleterious effect, which is to reduce further the number of competitive seats in Congress. This number has been declining steadily over recent years, as the combination of the sorting of the population - Democrats increasingly packed into urban areas and Republicans more spread out - and the impact of gerrymandering lead to more and more safe seats for both parties and a reduced voice for voters.

"Redistricting is all about power," said Christopher Mooney, a political science professor at the University of Illinois Chicago. "When you're in control, you've got the power. People are going to take advantage of it, unless they want to unilaterally disarm."

With the balance of power in Congress shifting every few elections, the high-minded calls for a less partisan approach to redistricting are being lost this year. For politicians in both parties and for their rank-and-file loyalists, maintaining or gaining that power is seen as more important than ever - and certainly more important than how maps are drawn.