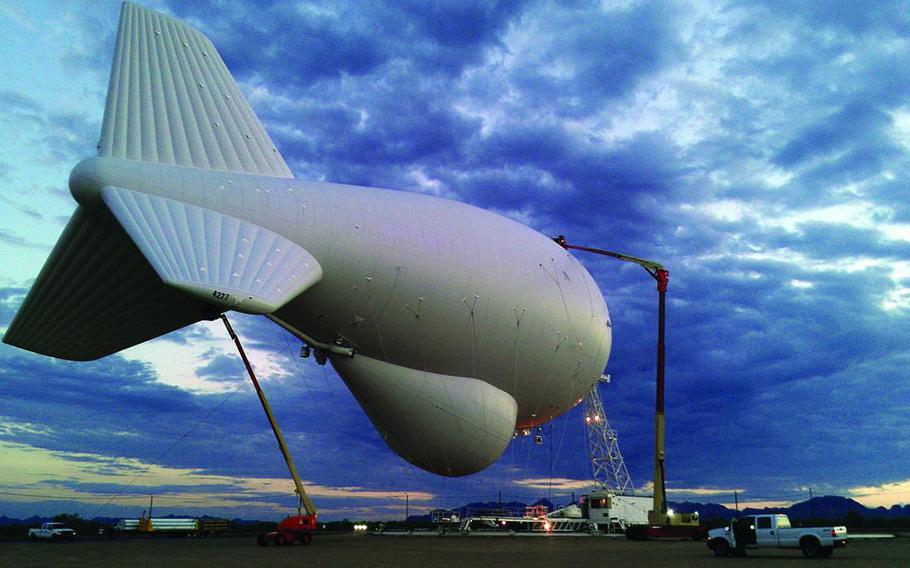 The Department of Homeland Security is asking the Pentagon to send an additional 1,500 troops to the U.S. border with Mexico next year, in part to operate observation blimps previously used by forces in Afghanistan, said Rep. Henry Cuellar, D-Texas.

The request is making its way through the Defense Department approval process and could authorize up to 4,500 service members deploy to the southwest border during fiscal 2022, which began Oct. 1. It would expand the border mission that began nearly four years ago and includes a mix of active-duty and National Guard troops providing support to U.S. Customs and Border Protection, known as CBP.

The Pentagon declined to comment on the request because it has not yet been approved.

The request calls for more troops to operate large blimps, also known as aerostats, said Cuellar, whose district includes a stretch of south Texas and the border town of Laredo. The surveillance equipment hovers at up 10,000 feet, accumulating data of the surrounding area.

CBP said in a statement that the request is to address a “funding shortfall” that will end the tactical aerostat program in December. The request to the Pentagon also asks for “a potential loan of additional aerostats,” according to the statement.

Cuellar said he supports the use of the blimps, which the agency refers to as the Tactical Aerostat System Program.

“They were talking about getting rid of certain aerostats and I disagree,” he said Wednesday during a call with reporters.

He first saw the blimps in use in Afghanistan during a congressional trip years ago and he thought they would be advantageous at the southern border, where there are vast, open stretches of land. He also said he supports additional cameras, drones and artificial intelligence to watch over these isolated areas.

“The problem is that Homeland [Security] got into a contract with a private company, and they were paying them, some of them, up to $5.3 million a year just to run them, not for the equipment,” Cuellar said.

The aerostats are still important to the mission, but need to be managed more affordably. Troops are one option, as is seeking a better contract, he said.

Blimps are not completely foreign to the military — troops used “tactical aerostats” in Afghanistan, according to CBP, which acquired some of those blimps from the Defense Department. Some of the blimps also have cameras that offer real-time imagery to agents on the ground.

The blimps use helium to hover in the air, but are moored to the ground with a nylon fiber cable, according to CBP. The unmanned, unarmed blimps can detect aircraft within about 200 miles, as well as ground and water traffic.

The aerostat program began more than 30 years ago under the U.S. Customs Service to track low-flying aircraft used by drug smugglers, according to CBP. The Air Force managed the program until it transferred the mission to CBP in 2013.

However, tactical aerostats were last funded in the fiscal 2020 budget for about $26.5 million, according to online budget documents. The Department of Homeland Security justified the cut in 2021, stating remote video surveillance systems could cover the job and not impact performance.

DHS did not ask for funding for the blimps in its proposed fiscal 2022 budget.

Each blimp cost about $8.9 million in 2014 and lasts about five years, according to CBP.

About 2,400 troops are now deployed to the southwest border, said Lt. Col. Chris Mitchell, a Pentagon spokesman. The troops are a mix of active-duty service members and National Guard troops from nearly two dozen states. Their work includes helping to identify, monitor and analyze patterns of unauthorized entry and alert Border Patrol agents.

Defense Secretary Lloyd Austin authorized up to 3,000 troops to serve in support of the Department of Homeland Security through Sept. 30, 2022, or the end of the fiscal year.