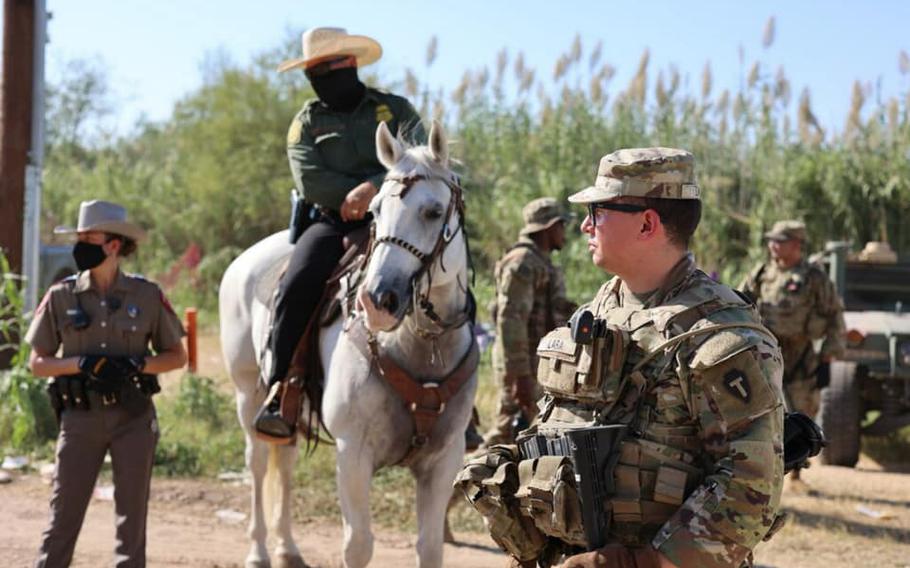 The Texas National Guard will send 1,500 additional troops to the state’s border with Mexico during the next month to conduct a border security mission under the direction of Gov. Greg Abbott. The troops join about 1,000 Texas Guard members already deployed. (Texas National Guard)

Texas National Guard will more than double its troop levels at the state’s border with Mexico to about 2,500 service members during the next month to conduct security and build a border barrier under the direction of Gov. Greg Abbott.

Just in the last week, National Guard troops arrested more than 2,000 people crossing the border illegally, Lt. Col. Rodney Kelley, director of training and operations for the Texas Military Department, said Thursday during a news conference. They saw another 200 people turn back into Mexico without crossing, he said.

Guard engineers have already built about three miles of border barrier and the surge of troops will allow teams to work in multiple areas while also surveying future construction sites, Kelley said. Two engineer teams are already working along the border, with two more expected to arrive this week.

He described the barrier as a 10-foot chain link fence with additional equipment at the top to help secure it.

A dozen teams will work on border barriers within the next month in partnership with the Texas Department of Public Safety, known as DPS. This increase could allow the Guard to build up to half a mile of fencing a day, Kelley said.

“We have to train. We have to get the equipment and the additional resources in place. Then we're working with DPS. Through their analysts and working with the office of the governor, they're going to locate and point out the places that create the biggest need, and we will flow teams there and be as efficient as quick as possible in doing the infrastructure construction,” Kelley said.

All work has been done on private property, primarily within the Del Rio area, which includes Val Verde, Kinney and Maverick counties, said Victor Escalon, regional director for DPS South Texas. Eventually, he said he would like to expand west into the Big Bend region and east into the Rio Grande Valley.

Del Rio became the focus of border security this month after about 30,000 migrants, mostly from Haiti, surged to the city, which led to the closure of an international bridge.

While about 8,000 migrants returned to Mexico, the remaining people were processed into the United States and many were deported on 17 flights to Haiti, Department of Homeland Security Secretary Alejandro Mayorkas said Sept. 24 during a White House briefing.

DPS and the Texas National Guard sent already deployed personnel to Del Rio as U.S. Customs and Border Protection agents processed the migrants. The bridge reopened over the weekend and Kelley said the Guard has now prepositioned about 70 Humvees in the area in case a similar situation arises.

Abbott, a Republican, signed a law on Sept. 17 that added nearly $1.9 billion to the state’s border security budget, which was expected to increase the number of National Guard troops at the border. Guard members have been working with DPS since March on a mission called Operation Lone Star.

The Texas Military Department requested last week through a post on social media for Texas Guard members to volunteer for the deployment to the border, boasting that lodging and a $55 per diem are included.

These state-activated troops are in addition to the 3,500 troops deployed on a federal mission along the entire U.S. border with Mexico in support of the Department of Homeland Security, according to Joint Task Force North, the military headquarters that oversees the mission. The Defense Department authorized troops to serve on the federal mission through September 2022.