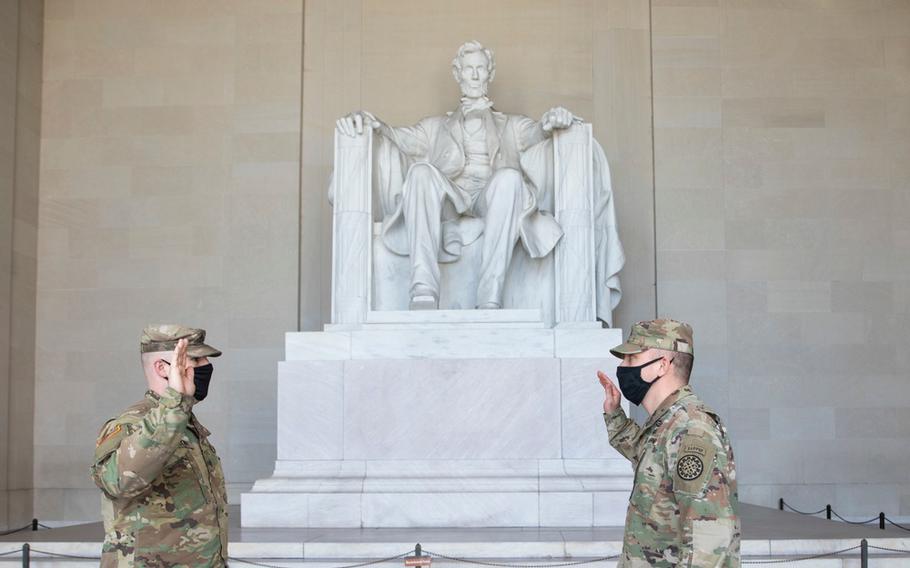 The nation’s 16th president, deep fissures of suffering etched into his face after 31 months of civil war, declared himself unworthy of commemorating the dead. His tone and language were very similar to key parts of New York Times correspondent Samuel Wilkeson’s soul-searing dispatch on deadline from Gettysburg more than four months earlier. After researching Wilkeson’s career for a book on Gettysburg’s awful aftermath, I believe that Lincoln heavily embedded the reporter’s story into the Nov. 19, 1863, Gettysburg Address. (Michigan National Guard)

GETTYSBURG-COMMENT 1060 words The journalist who inspired Abraham Lincoln’s Gettysburg Address Seven score and 18 years ago on Friday, Abraham Lincoln stood on the grounds of a new cemetery in battle-scarred Gettysburg, Pa., to honor the Union men who had given a “last full measure of devotion.”

The nation’s 16th president, deep fissures of suffering etched into his face after 31 months of civil war, declared himself unworthy of commemorating the dead. His tone and language were very similar to key parts of New York Times correspondent Samuel Wilkeson’s soul-searing dispatch on deadline from Gettysburg more than four months earlier. After researching Wilkeson’s career for a book on Gettysburg’s awful aftermath, I believe that Lincoln heavily embedded the reporter’s story into the Nov. 19, 1863, Gettysburg Address.

Our republic has survived 245 years of civilization-fracturing trials, and in our loud and divisive era, the role of the free press is under attack from many quarters. But this story of leader and journalist coming to similar conclusions during one of the country’s darkest previous moments is a shining example of the constitutional roles of a president elected by the people and a press independent of the government. History itself is under fresh reexamination - and for good cause, as wrongs and inequities of our age have forced a reassessment of the acts and prejudices of America’s founders and those who followed. A free press must lead in these re-examinations. A republic cannot honestly survive without it.

I’m not alone in connecting Lincoln and Wilkeson. Dickinson College historian Matthew Pinsker has written that “it appears very likely that Lincoln was working at least in part from another man’s text” in the Gettysburg Address.

Wilkeson’s July 6, 1863, Times story, considered by historians to be one of the best battlefield dispatches ever written, was later distributed as a pamphlet across the country. It told in deep detail and broad sweep the story of a battle in which more than 7,000 men died and more than 44,000 were wounded, captured or missing.

Wilkeson wove intimate descriptions of the brutality of combat - he was in Union Gen. George Meade’s headquarters when it was bombarded before Pickett’s charge up Cemetery Ridge on July 3 - with a detailed account of the strategy, and with prophetic analysis about the significance of Gettysburg as a pivot point in history. Reading it evokes chills and awe 158 years later.

The reporter wrote it while sitting at the makeshift gravesite of his oldest son, Bayard, who was just 19 and had been the youngest artillery officer in the Union Army. Bayard, later memorialized by artist Alfred Waud, was severely wounded in the battle’s opening salvos when a superior Confederate force overran his exposed position northwest of town. The young man suffered cruelly for hours as two women of mercy - one Black, one White - soothed him into death in a dank basement of the Adams County poorhouse.

The commander of the Union 11th Corps, the one-armed Oliver Otis Howard (who later founded Howard University), credited Bayard Wilkeson and fellow soldiers with resisting the Confederates long enough for pieces of an arriving Union Army to hold the high ground of Cemetery Ridge and win the battle two days later.

Lincoln often crossed courses with the hard-charging abolitionist Wilkeson, who was married to suffragist Elizabeth Cady Stanton’s sister, Cate. Wilkeson initially was New York Tribune editor Horace Greeley’s Washington bureau chief; he moved to the Times only weeks before the battle. He was tough on the war effort. Four months before Gettysburg, when Lincoln met Wilkeson and a companion at the White House, the president complained that Wilkeson had “constantly” attacked “the way in which the war is carried on, and everything.”

But they shared key themes and language to commemorate the brutal fighting at Gettysburg from July 1-3, 1863, that forced Robert E. Lee’s Confederate army back to Virginia.

I have found no evidence the two men met right after the battle. Lincoln, who so loved newspapers before the war that he’d often read whole stories to his law partner, would sometimes summon reporters after big battles, as he had done with a Wilkeson colleague after the disastrous Union defeat at Fredericksburg, Va., the year before. But Sam Wilkeson, crushed by Bayard’s death, disappeared into mourning for months after he filed his story.

“Who can write the history” of a savagery that had both taken his son’s life and possibly saved the Union, Wilkeson asked in his lead paragraph, written after dark on July 4, Independence Day, and published July 6. Wilkeson closed with an answer: “You dead, whom at Gettysburg have baptized with your blood” a “second birth of freedom.”

In his Gettysburg Address, Lincoln proclaimed that “we can not dedicate - we can not consecrate - we can not hallow - this ground. The brave men, living and dead, who struggled here, have consecrated it, far above our poor power to add or detract.”

There is further evidence that, in the hours immediately after the battle, Lincoln and Wilkeson drew similar lines from the founders to the dead at Gettysburg. On the night of July 7, after Wilkeson’s Times story would have hit streets of the capital, Lincoln briefly addressed a crowd that gathered outside the White House to celebrate victories at Gettysburg and Vicksburg, Miss.

“How long ago is it - eighty-odd years - since on the Fourth of July for the first time in the history of the world a nation by its representatives assembled and declared as a self-evident truth that all men are created equal?” he asked.

By November, Lincoln had refined it to “four score and seven years ago.”

Miami University of Ohio historian Martin P. Johnson has determined that Lincoln only twice during the war publicly declared that “all men are created equal”: In that July 7 speech, and in the Gettysburg Address.

Words from the ages. And words we still struggle to live by.

Chuck Raasch is the author of “Imperfect Union: A Father’s Search for His Son in the Aftermath of the Battle of Gettysburg.” He is a former Washington correspondent for the St. Louis Post-Dispatch and a former national correspondent and columnist for Gannett News Service.