Most parents use child tax credit on food, bills and other necessities, survey finds 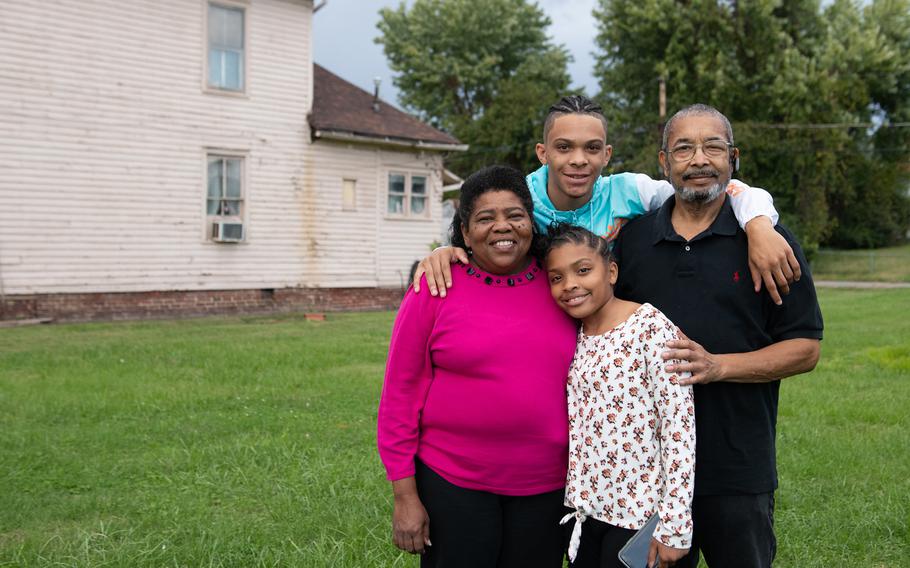 Ruth Jones, left, and her husband, James Jones, pose with their grandchildren Ayricah Clark, 10, and Nilique Jones, 17, near their home in Charleston, W.Va., on Oct. 21, 2021. The Joneses are raising their grandchildren. (Lexi Browning/The Washington Post)

WASHINGTON - As the House prepares to vote this week on legislation that could extend President Joe Biden’s expanded child tax credit, a new national survey shows that the benefit has reduced families’ financial stress and helped them afford necessities but that Hispanic parents remain less likely to claim it than White and Black families.

The survey - which was administered by the polling firm Ipsos in consultation with the Center for Law and Social Policy, researchers from the University of California at Berkeley and others - was conducted in October, after most families had received three rounds of payments.

Families across the income spectrum have long qualified for some form of tax relief, but this year as part of the $1.9 trillion coronavirus relief measure, the Biden administration began allowing parents to receive half of their refunds in advance through small monthly payments. Under the previous child tax credit, families received a lump benefit of up to $2,000 per child off their tax bills. Parents can now receive $250 per month for each child between ages 6 and 17, and $300 for each under age 6, for up to $3,600 per child.

The installments have made a difference for low-income families, said Ashley Burnside, a policy analyst for the Center for Law and Social Policy.

“The monthly payments make it easier for parents to budget for financial emergencies that can come up throughout the year,” Burnside said. “It makes it easier for them to afford expenses as they come up, and it’s something that they can rely on as they budget, knowing that they’ll be getting $300 per month per child, ages 0 through 5.”

Burnside’s partners surveyed more than 1,000 families, all of whom earned less than $75,000 a year, and found that more than three-fourths had claimed the benefit and that 66 percent were receiving the monthly checks. A majority of respondents said they planned to use the payments on bills, food and clothes. Nearly 70 percent of respondents who reported getting the monthly checks said the payments made them feel less stressed about money.

This month, researchers at the Census Bureau found that 3 in 10 families who received the payments used them on school expenses, while 1 in 4 families with young children used them to cover child-care costs. Bureau officials also found, through data gleaned via its Household Pulse Survey, that fewer households with children experienced food insufficiency after the introduction of tax credit payments.

About 36 million eligible families received a check this month, according to the Internal Revenue Service and the Treasury Department.

“We’re concerned because, of course, we want everybody who’s eligible for it to access these payments,” Burnside said. “Our partners are definitely trying to think of ways to promote outreach, especially as we’re going at the tax filing season next year to think about how we can target families who are likelier to not file taxes or to not be aware of their eligibility.”

Lawmakers have only approved the expanded credit through December, but Biden’s Build Back Better Act could extend the monthly payments through 2022 for parents who earn less than $75,000 a year if they’re single, or less than $150,000 if they’re married. The Act could also make permanent a provision that allows the lowest-income families to receive the full benefit, even if they don’t pay taxes.

In September, Sen. Joe Manchin, D-W.Va., criticized the expansion because it did not require a work component. Researchers at the University of Chicago have estimated that extending the benefit in that way would prompt 1.5 million parents to leave the workforce.

As lawmakers continue to debate the program’s efficacy this week, Burnside said parents who use the monthly checks on food and rent need Congress to approve an extension.

“Those are all expenses that families are going to have to continue meeting beyond December, so it’s absolutely essential that lawmakers extend these payments into next year,” Burnside said. “Otherwise, these monthly payments will stop next month, and parents will be left without this money that they can rely on to meet those existing bills and cost of food.”