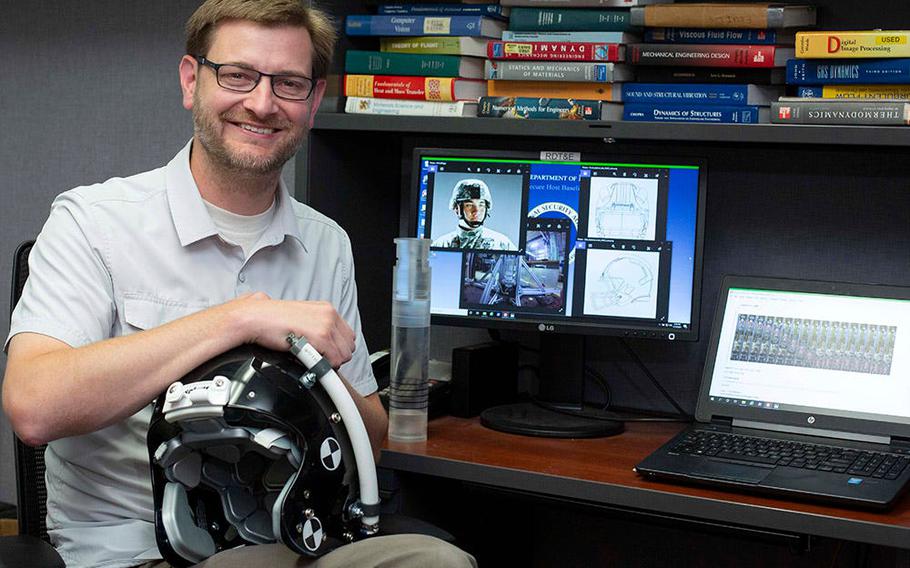 NEWPORT, R.I. (Tribune News Service) — When Dr. David Jesse Daily was in graduate school at Brigham Young University, a co-worker shared a party trick in which someone puts water in a glass bottle, hits the top of the bottle quickly and the bottom of the bottle shatters.

Now a mechanical engineer in the Naval Undersea Warfare Center Division Newport's Sensors and Sonar Systems Department, he used high-speed cameras to capture the moment of impact. He observed bubbles were created at the bottom of the bottle by the impact and the collapse of those bubbles broke the bottle.

"The impact created a distinct type of cavitation based on acceleration, which occurs when liquid suddenly accelerates and changes to a vapor state — seen as bubbles," Daily said. "The collapse of the cavitation bubbles is what causes the bottle to break."

Eventually this research led Daily to design a football helmet that mitigates frontal impacts, reducing the incidence of concussion.

For part of his doctorate dissertation, Daily derived a new cavitation number based on acceleration. He completed that work in graduate school and, years later, presented his work at Division Newport's informal "Intellectual Storytime" as a solution in need of a problem.

After his presentation, he began to work with Dr. Jesse Belden and Aren Hellum of the Undersea Warfare Weapons, Vehicles and Defensive Systems Department on possible applications for this acceleration-based cavitation.

When applied to an object like a football helmet, a cavitation device — for example, a tube containing water — may lessen the severity of an impact and possibly the severity of a traumatic brain injury. Daily looked at common impact locations on football players' helmets. These locations differed based on the player's position.

Daily's helmet is designed to mitigate the frontal impacts most commonly received by linemen. The cavitation tubes were able to lengthen the overall duration of the impact by 20%, which could theoretically allow the cerebral-spinal fluid to more effectively cushion the brain and prevent traumatic brain injury.

A common cause of injury is when the head suddenly snaps back and then whiplashes forward, causing the brain to impact the front of the skull and then rebound and impact the back of the skull. This type of impact, known as a "coup contrecoup," is believed to be one cause of concussions.

Daily's "quiescent cavitation" device could potentially slow down and lessen these impacts, thereby reducing the incidence of concussion. While a cavitation feature on a helmet will not eliminate effects of an impact, it could provide some reduction of impact as a compact, passive device. This cavitation device could add just enough additional protection to be a game-changer.

— Understand the physics and how acceleration impacts are lengthened due to cavitation.

A patent for parts of his quiescent cavitation work has been filed and Daily hopes to continue that research in the future.

"I would like to build more cavitation prototypes to investigate the potential for reducing traumatic brain injury as well as using cavitation in various automotive and safety applications," Daily said.