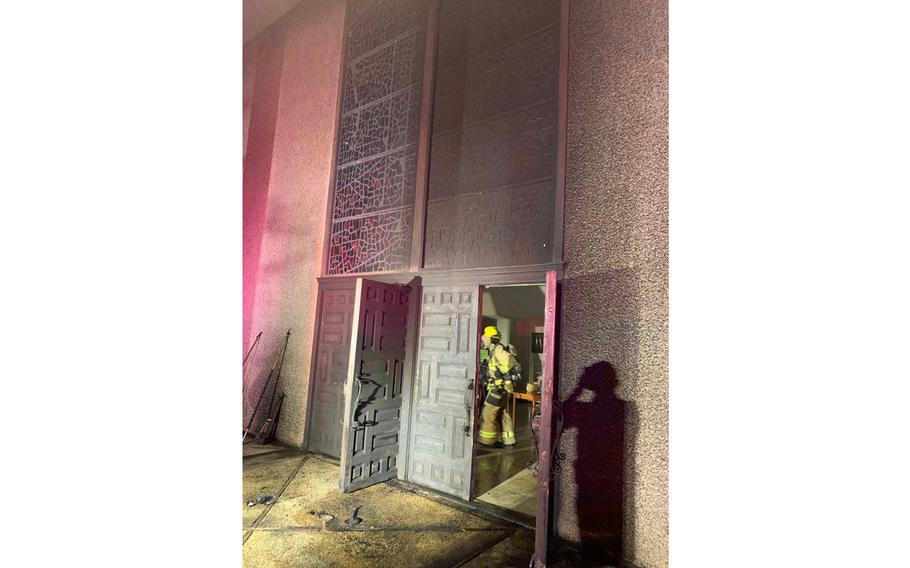 (Tribune News Service) — On the day that federal agents say he set fire to the Congregation Beth Israel synagogue, 18-year-old Franklin Barrett Sechriest logged an alarming entry in his handwritten journal: “Scout out a target,” he wrote, according to newly unsealed court documents.

Security video later showed his Jeep SUV in the parking lot about 9 p.m. Oct. 31, a federal charge document states, just before footage revealed the orange glow of a fire that investigators say was arson.

Within a couple of days, the court documents say, Sechriest scribbled again in his journal: “I set a synagogue on fire. ... Get worried when it mentions they are ‘hopeful’ a suspect will be caught.”

The entries fell in a to-do list that also included surfing the dating app Tinder, doing laundry and meditating.

Sechriest, a member of the 6th Brigade of the Texas State Guard and a Texas State University student, now faces a federal arson charge related to the fire — he already was facing an arson charge in state court — and an affidavit made public Monday described the case against him in more detail.

It included photographs of racist and antisemitic entries from his journal and other evidence officials say link him to the fire.

The fire was among several alarming incidents in Austin in recent weeks that raised fears about an ongoing attack on the Jewish community. The affidavit in Sechriest’s case makes no mention of any larger, coordinated effort in which he is suspected of being involved, but officials say investigations into the incidents are ongoing.

On Sunday, hundreds of people attended a rally at the Capitol for kindness to counter the hate-driven incidents, which also have included antisemitic graffiti at Anderson High School and a group that twice hung offensive banners from a MoPac Boulevard ( Loop 1) overpass.

According to the affidavit, Sechriest also wrote, “return to base,” under his entry about finding a target, but it is unclear whether he was in Austin that day or was referring to his Guard duties.

The Texas State Guard, part of the Texas Military Department, provides in-state service for emergency and disaster response and border security, among other things. The Guard said in a statement that it is cooperating with the investigation and “will not tolerate misconduct.”

Investigators with the FBI and Austin Fire Department wrote that they first linked Sechriest to the fire using security video that showed his license plate. Then they searched his home and SUV.

On Sept. 6, he bought a green 5-gallon racing fuel utility jug at Cabela’s in Buda, according to a receipt in his car, and agents wrote that they also found three 32-ounce bottles of lighter fluid and matches in his car. The affidavit said the fuel container is similar to the one the suspect was seen on security video using.

“Based on my training and experience, and that of other agents knowledgeable about explosive devices, these items are consistent with materials that can be used and combined to produce destructive devices known as Molotov cocktails,” FBI agent Thomas P. Joy Jr. wrote.

In a search of his home, officials wrote that they found Sechriest’s journal and a 2021 planning calendar. Using a racial slur, he wrote on Aug. 19 that he had to take a “n----- appreciation class” the day after Texas State orientation, a picture of his calendar entry showed.

Fire Department investigators determined that the blaze caused at least $25,000 in damage — synagogue officials said Monday it is closer to $150,000 — and could have destroyed the building on Shoal Creek Boulevard.

Congregation Beth Israel Senior Rabbi Steve Folberg, who spoke at Sunday’s rally at the Capitol, said in a statement: “We denounce all acts of bigotry and violence, especially those motivated by blind hatred of any of the proud and distinctive communities that enrich our civic life. We will remain strong and vigilant in the ongoing work of justice, safety and peace for ourselves and all our neighbors.