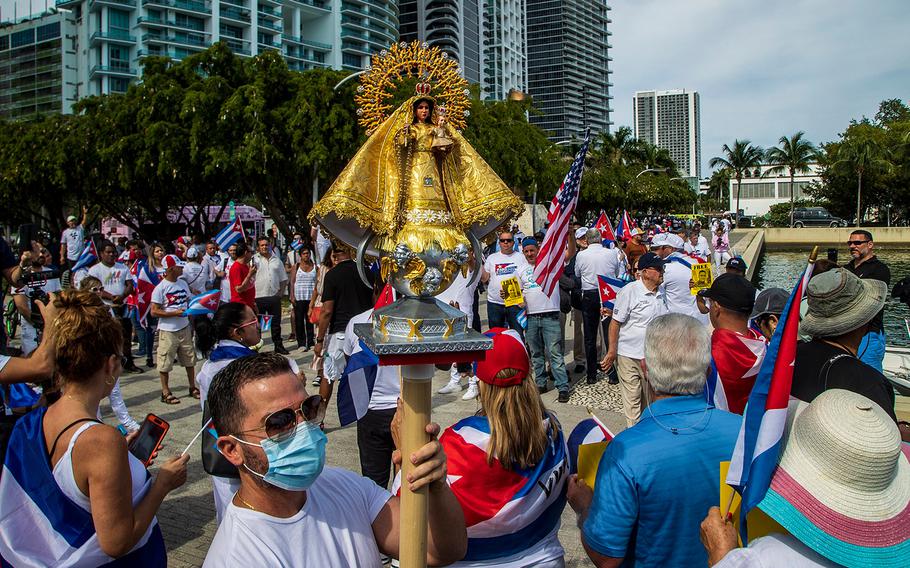 Rey Acosta holds an image of ìOur Lady of Charity (Virgen de la Caridad del Cobre) during a gathering by Cuban exiles at the Museum Park after a car caravan organized by the Assembly of the Cuban Resistance through the streets of Miami from the Cuban Memorial in Tamiami Park to the Freedom Tower in Downtown Miami. (Pedro Portal/TNS)

MIAMI (Tribune News Service) — The Cuban government and the opposition are on a clashing path this weekend.

Authorities are conducting widespread police interrogations, detentions and so called acts of repudiation in anticipation of an opposition march planned for Monday that the government has said it will not allow because it claims it is part of a U.S. interventionist plan.

Cubans in several cities worldwide have organized demonstrations in solidarity with the Cuban people and the young artists and activists of Archiepiélago, the group that called the march. The authorities have already threatened to imprison Yunior García Aguilera, one of the Archipiélago leaders, who announced his intentions to walk alone Sunday.

“Civility is what will lead us to have that country that Martí dreamed of, to end this dictatorship and transform the country into a democracy,” García said in a telephone interview from Havana, referring to Cuban independence war hero and poet Jose Martí. “A country where there would be no exclusions, with no ideological apartheid, where no Cuban would feel excluded from participating.”

Garcia said that state security agents surrounded his house but that he was going to try to go out for a walk alone carrying with a white rose.

“They can knock down my door at any moment,” Garcia said. “There are many cars, security agents in civilian clothes. I am looking from my window, and they are all over the street, in a school that is in front of my house, on the ground floor of my building, they are in front of my door, they are everywhere.”

García said that the agents were planning an act of repudiation and expelled journalists who came close to his home. Later in the afternoon, a state media anchor showed images of a group of government supporters near García’s home, dancing and chanting, “I am Fidel” to the rhythm of conga drums.

Foreign journalists who tried to get close to García’s house said the government had closed off access. He was not able to leave his house at 3 p.m. as planned. Instead, he showed a poster through his window with the sign “My house is blocked.” Earlier, government supporters had tried to block his window with a giant Cuban flag unrolled from a top floor, but they missed it by a few inches. They made a few other attempts until they completely covered it.

Meanwhile, in Miami, hundreds of cars carrying Cuban flags and signs with the slogans “Patria y Vida” and “SOS Cuba” set off in a caravan in the morning from Tamiami Park in a gesture of support for the Cubans of the island and the November 15 march.

“It is our duty to be here, as a show of support for those Cubans who are going to march tomorrow to demand their freedom,” said Carolina López, a Cuban exile who was participating in the caravan

“The homeland is calling; this is what we must do,” said Ileana Bauza, another participant. “Since we cannot be there, what better way to support our people than by echoing what is happening on our island.”

The Assembly of the Cuban Resistance, a coalition of exile opposition groups organizing the initiative, said it estimates that more than a thousand cars participated in the caravan that ended at the Freedom Tower on Biscayne Boulevard.

In a rally near the Tower, Cuban activist Rosa María Payá announced that she will attempt to travel to Cuba on Monday, along with two members of the European Parliament representing right-leaning parties from Spain and Italy, and Cuban social media influencer Alexander Otaola.

“The Cuban regime is the Berlin wall of our hemisphere,” Payá told the crowd. “What is happening in our country, what is going to happen tomorrow, is another step in the direction of tearing down that wall.”

It is unlikely that they would be allowed to enter the country. In the past, the island’s authorities have denied entrance to former presidents, politicians and activists critical of the government.

Cuban exiles also held a vigil at La Ermita de la Caridad, the Shine to Our Lady of Charity, in Miami on Sunday afternoon, organized by the groups Roots of Hope and Miami Freedom Project.

“God is with the Cuban people, and he is a witness to all the suffering that the dictatorship has put us through. This is the moment and we must pray for it,” said Dairyn Arango, one of the attendees.

Cuban officials said that Monday, the day of the planned protest, the country will celebrate the return to a “new normality,” as it was opening its borders to international travelers after several months of pandemic-related restrictions.

Minimizing the confrontation with the opposition, Cuban leader Miguel Díaz-Canel said on television Friday that he was not losing “any sleep over” the demonstration, adding that the country was “ready to defend the revolution.”

But Cuban authorities are notably nervous.

Since Friday, several independent news outlets and social media users have reported extensive police and special units’ presence throughout the country. Military troops are mobilized under the pretext of announced exercises. And the government also announced several fairs and activities with children throughout the week and until Monday in an attempt to claim public spaces.

One of Archipiélago’s coordinators, Daniela Rojo, was arrested Friday and her whereabouts are unknown, the group said. Cuban opposition leader Guillermo Fariñas, a European Parliament Sakharov Prize winner, was arrested on Friday and taken to a hospital awaiting prosecution, his relatives said.

Several members of Archipiélago, supporters of the march with a social media presence, and independent journalists, including Washington Post columnist Abraham Jiménez Enoa, have denounced that they are under house arrest or have been warned not to leave their homes or they will be detained.

Following the publication of an interview with García on Saturday, the government revoked the credentials of staffers from the Spanish news agency EFE, sparking a diplomatic spat with the Spanish government and the European Union, which protested the measure. On Sunday, only two members of the EFE team received authorization to continue reporting from the island.

Security agents prevented Víctor Ruiz from leaving his house this Sunday, according to a video of the exchange shared with the Herald. Ruiz had signed a letter notifying authorities in Santa Clara of the intention to march Monday. A security agent is heard in the video insisting that Ruiz open the door. Below the building, a man dressed in a white T-shirt and speaking on a cell phone yells “gusano” — worm — at him, a term coined by the late Fidel Castro to try to denigrate dissidents. A group of people are also heard chanting slogans in favor of the Cuban regime.

Another video shared with the Herald shows a small group of government supporters staging another repudiation act against Santa Clara activist Andy García Lorenzo in the afternoon.

Leinier Cruz Salfrán, a march planner in Guantánamo, who reported he had been briefly “kidnapped” by state security agents, was detained again this week. Shortly after, he posted a video on social media disavowing Archipiélago. He then deleted all his social media accounts.

“This time may be different. The regime is reacting out of fear, not confidence,” said Eric Farnsworth, vice president of the Council of the Americas in Washington. “For the first time in memory, the repressive measures they took after July 11 have not worked, and they have doubled down on threats and pre-emptive actions. The protests are broad based, and if they cannot be contained, they may well gather momentum, challenging the regime to the core.”

On Sunday, U.S. Secretary of State Antony Blinken called on the Cuban government to allow the march and avoid responding with violence. Hundreds of Cubans are still under detention, and some face long sentences in jail for taking to the streets on July 11. That day Díaz-Canel sent police, special military units and government supporters to put down the islandwide protests.

“On November 15, Cubans will again call on their government to hear their aspirations for a better future. The Cuban government has already made clear that it does not want to listen; the regime has denied permission for the protests, dismissed opposition supporters from their jobs, and threatened dissenters with imprisonment. We strongly condemn these intimidation tactics,” Blinken said.

The secretary also urged the island’s authorities to avoid the internet shutdowns seen in July and called on the international community to “speak with one voice.”