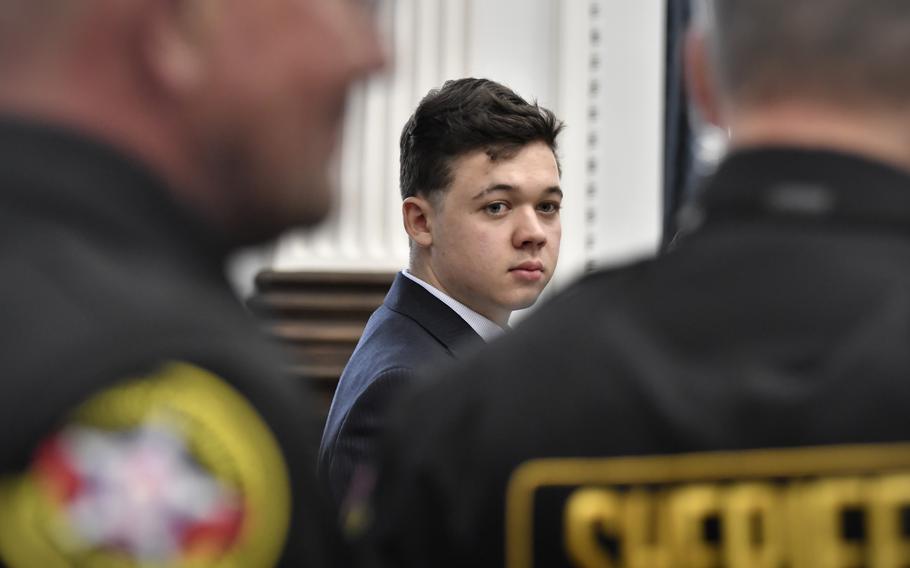 Kyle Rittenhouse, center, looks back as Kenosha County Sheriff’s deputies enter the courtroom to escort him out of the room during a break in the trial at the Kenosha County Courthouse in Kenosha, Wis., on Friday, Nov. 5, 2021. (SEAN KRAJACIC, The Kenosha News/AP)

The Wisconsin National Guard will stage outside the city, where closing arguments are expected to begin Monday. The guard members will be tasked with protecting infrastructure and providing law enforcement with logistical support, but will not interfere with protests, the governor said in a statement.

“We continue to be in close contact with our partners at the local level to ensure the state provides support and resources to help keep the Kenosha community and greater area safe,” Gov. Tony Evers said in the statement.

“The Kenosha community has been strong, resilient, and has come together through incredibly difficult times these past two years, and that healing is still ongoing. I urge folks who are otherwise not from the area to please respect the community by reconsidering any plans to travel there and encourage those who might choose to assemble and exercise their First Amendment rights to do so safely and peacefully.”

Rittenhouse, then 17, fatally shot two men and injured a third in August 2020 during unrest stemming from the police shooting of Jacob Blake. Blake, a Black man, was paralyzed after being shot in the back multiple times by a white officer.

Evers, a Democrat, was sharply criticized for not deploying the guard sooner to help prevent the looting, arson and rioting that severely damaged swaths of the lakefront city. Believing the police could not handle the situation alone, armed citizens — including Rittenhouse — took it upon themselves to patrol the city amid the chaos.

Rittenhouse has pleaded not guilty to all charges, arguing he fired his AR-15-style rifle in self-defense.

The potential verdict may have put other law enforcement agencies on alert, including the Chicago Police Department, which canceled officers’ days off this weekend. The police union blamed the upcoming Rittenhouse deliberations, while the city cited general crime concerns.