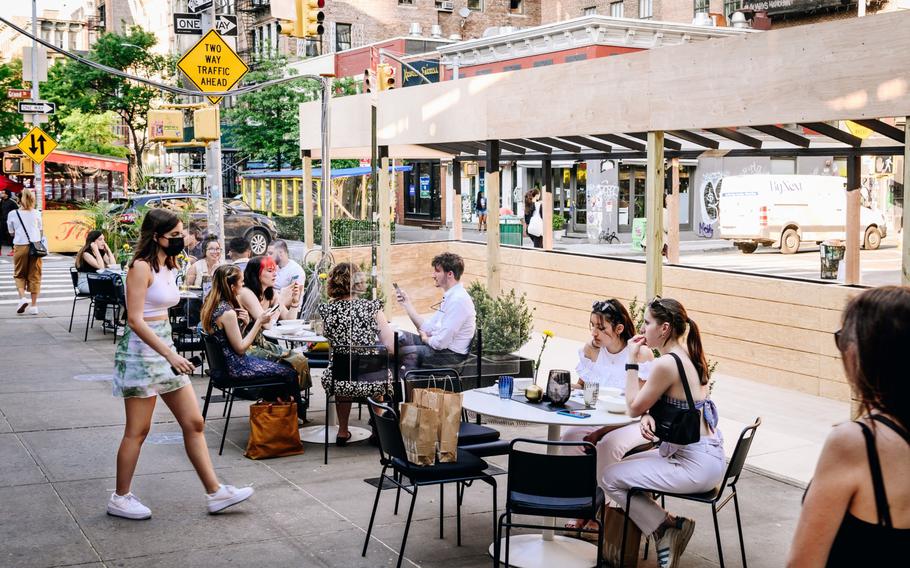 Pedestrians sit in the outdoor dining section of a restaurant in the SoHo neighborhood of New York on May 19, 2021. (Nina Westervelt/Bloomberg)

Prices rose 6.2% in October compared with a year ago, the largest annual increase in about 30 years, as rising inflation complicates the political agenda for the White House and policymakers' road map for the economy heading into the end of the year.

The growth in October prices reported today by the Bureau of Labor Statistics was driven by soaring energy prices and ongoing supply chain backlogs, such as those in the used-car market. Gasoline prices are up 49.6% from a year earlier, and higher energy costs are pushing up the prices of just about every other good, economists say, and pinching an already strained supply chain.

A surge that began in narrow sectors now appears to be spreading throughout the economy, with the BLS noting "broad-based" higher prices propelled by not just energy and used cars, but also by shelter, food and new vehicles. Prices for medical care, household furnishing and operations, and recreation all increased in October.

Overall prices rose 0.9% from September to October, tying June for the biggest one-month increase since the Great Recession. Only a few categories saw prices fall last month, including airfare and alcohol.

The data underscores how inflation has emerged as a controversial political and economic issue during the pandemic era. For years, inflation remained tamely below the Fed's 2% annual target and off politicians' radar. But the clash of supply chain backlogs, labor shortages, and ongoing uncertainty amid a public health crisis has turned inflation into a crucial test for policymakers and economists — and it's unclear when that will change.

"This was the first number that very clearly was not 'temporary shortage' driven," said Adam Posen, president of the Peterson Institute for International Economics, suggesting that the pandemic-era supply shortages are no longer the overwhelming force. "There were things that are no longer short, coming back up in price. Services that by definition aren't really short, coming up in price."

The latest snapshot of higher prices comes at a tense time for the Biden administration, as it tries to corral support for a $2 trillion jobs and social spending package. On Wednesday morning, a key Democrat needed for the package, Sen. Joe Manchin III, W.Va., raised new concerns about inflation, building on his earlier remarks warning about more government spending.

President Joe Biden tried to assuage these fears Wednesday, highlighting good news in the economy — including lower weekly claims for jobless benefits — while also suggesting his economic agenda, including the package Congress recently passed to boost infrastructure spending, will bring down prices.

"Inflation hurts Americans pocketbooks, and reversing this trend is a top priority for me," Biden said in a statement.

inflation will be a temporary or "transitory" feature of the economy. They argue that the price increases are driven by supply chain backlogs that have constrained auto manufacturing, housing construction and food production alike. Inflation won't come down to more sustainable levels, they argue, until those supply chains have time to clear.

It's unclear when that will happen, especially given how vulnerable the economy remains to the coronavirus pandemic and waves of the virus, which add unpredictable pressure to the supply chain both overseas and domestically. At a news conference last week, Fed Chair Jerome Powell said "it is very difficult to predict the persistence of supply constraints or their effects on inflation. Global supply chains are complex; they will return to normal function, but the timing of that is highly uncertain."

Some economists are also concerned that while wages are climbing, they aren't growing enough to compensate for the rising cost of living, at least in the short term.

Many of the items U.S. households rely on each day are seeing sharp price increases, BLS data shows. In the past 12 months, the national average price of a dozen grade A eggs rose from $1.41 to $1.82, a 29% increase. An average pound of chuck roast rose 29%, from $5.74 to $7.40. A gallon of milk rose 8.4%, from $3.38 to $3.66. However, many other items, particularly cheese and produce like grapefruit, tomatoes, romaine lettuce and broccoli, actually got cheaper over the same period.

Rent continues to inch upward, with costs rising 0.4% in October compared to September, following a months-long upward trend. Home prices also continue to grow, which some economists say has the effect of pulling rents up higher over time. The median sales price of single-family existing homes climbed 16% from one year ago, to $363,700, according to data released Wednesday by the National Association of Realtors.

"The Fed has to be laser focused on the hardest-hit and low-wage households," said Diane Swonk, chief economist at Grant Thornton. "Wages and salaries have gone up for leisure and hospitality workers ... but there's no way they can absorb the commute costs and accelerating rents. The only thing that's cheap is turkey, in terms of proteins. So go ahead and stick with that turkey for Thanksgiving."

Households and businesses have been hamstrung by inflation pressures for months.

Andy Husbands, 52, owns five Smoke Shop BBQ restaurants in Boston. Not only is Husbands scrambling to get ahold of every ingredient he needs to run his business — he's also hard-pressed to find items at prices he can afford.

Wings that used to cost $84 per case now cost $157. To-go containers are in short supply, as are bottles used for storing liquor. Brisket that used to be $3.75 a pound is now a dollar more expensive, meaning that the 150,000 pounds of brisket Husbands sells each year costs him an extra $150,000.

Planning ahead has proven to be no match for the pandemic-era economy.

"We get our bids on Fridays, that say, here are your prices for the next week. We've seen it increase by Monday," he said. "It's insanity that prices can change on a truck when it's being delivered to you."

Powell has pledged the Fed will do what it can to prevent price increases from becoming more permanent in the economy. The Fed's main tool for combating inflation is interest rates, which it can raise or lower depending on what's happening in the economy. Fed leaders have pledged not to raise interest rates until the labor market is more fully healed.

However, the rise in household goods is eroding wage gains each month. Households feeling the strain now could increasingly begin to believe that inflation will stick around longer and change their spending behavior, which could make inflation a self-perpetuating cycle, lasting longer.

Republicans, meanwhile, argue that the Fed should be doing more now to combat inflation. They say the Fed risks being behind the curve if inflation turns out to be much more permanent than Powell and others believe.

Some Democrats, too, warned about overheating in the economy. Former Obama treasury secretary, Lawrence H. Summers, for example, has long argued that sprawling stimulus efforts would be too much for the economy to handle and cause to a boom in consumer demand before supply chains could keep up.

Still, others on the left argue that the stimulus efforts and expanded government aid were essential in carrying vulnerable households through the pandemic. Officials in the Biden administration and Democratic lawmakers emphasized earlier in the pandemic that the risks of doing too little to help the economy outweighed the risks of doing too much.

Indeed, signs of a resurgent economy continue to appear, encouraging policymakers, economists and workers alike. The nation added 531,000 jobs in October, and the Labor Department has revised the disappointing jobs reports from August and September to show more significant gains. The unemployment rate has ticked down to 4.6%. Coronavirus cases have dropped in recent weeks, helping restore confidence for businesses and consumers. Major U.S. stock indexes have also soared to record levels.

Given those data points, Federal Reserve officials are starting to unwind the pandemic-era stimulus by scaling back, or "tapering," the vast asset-purchase program each month. The Fed has said it could tweak the pace of the taper depending on how the economy progresses. But Powell declined to explain what those criteria would be during a news conference last week.

Swonk said it's likely such broad-based price increases will continue in the months to come. That could spur the Fed to draw down its asset purchases more quickly.

"This is going to get worse before it gets better," she said.

The Washington Post's David Lynch contributed to this report.