A Los Angeles attorney found a novel way to get Afghans into the US. Will it work? 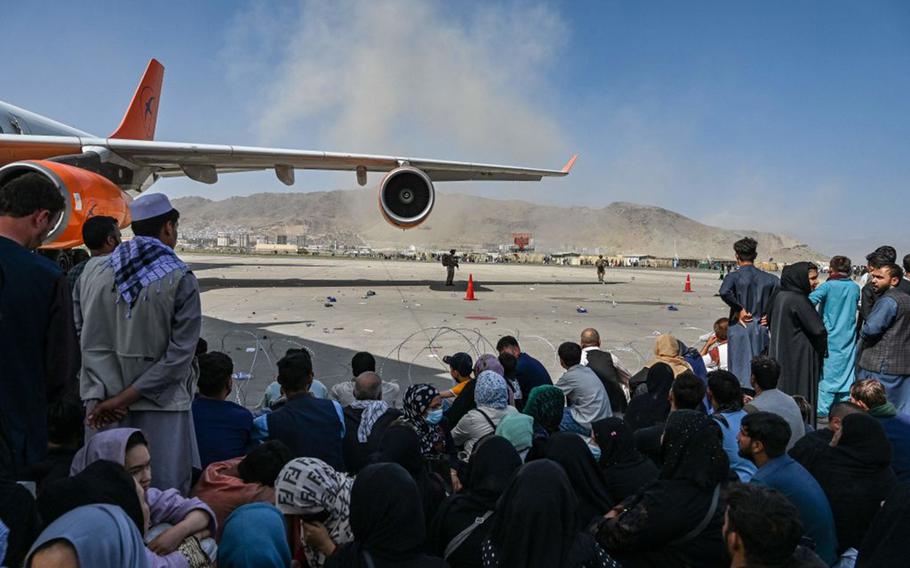 Afghan people sit as they wait to leave the Kabul airport in Kabul, Afghanistan, on Aug. 16, 2021, as thousands of people mobbed the city’s airport trying to flee. (Wakil Kohsar, AFP via Getty Images/TNS)

WASHINGTON (Tribune News Service) — As the Taliban stood poised to take control of Afghanistan’s capital city, Los Angeles attorney Wogai Mohmand watched, horrified, racking her brain for how to help her family and others escape.

She typed up a document outlining possible immigration pathways for Afghans seeking to come to the United States and posted it on social media. Hundreds of strangers replied, begging her for legal help.

Now Mohmand is spearheading an effort to convince the U.S. government to expand a fast-track for legal entry to the United States known as humanitarian parole to thousands of Afghans, even as the U.S. Citizenship and Immigration Services is struggling to process the applications it has already received.

Project ANAR — Afghan Network for Advocacy and Resources — co-led by Mohmand and two other Afghan American women, draws on past models of similar U.S. aid to groups from Latin America and South Asia. So far, the group has helped some 9,000 Afghans apply for parole to enter the U.S.

Under humanitarian parole, which is not a pathway to citizenship, the federal government can cut through the red tape of the typical visa process to temporarily allow people to enter the U.S. for emergency or public interest reasons. Parole is issued on a case-by-case basis and typically reserved for dire circumstances, such as giving someone a few days to visit a dying loved one.

It has also been used repeatedly over the last 70 years to quickly bring in groups from countries where the U.S. has been involved, including people fleeing the Cuban revolution, as well as Vietnamese, Cambodians and Laotians following the end of the Vietnam War. Once here, those individuals can request work permits and temporary refugee cash and medical assistance.

Unlike in the past when such broader efforts were initiated by the U.S. government, advocates aren’t waiting for an official program this time. They hope that the large number of applications will persuade the Biden administration to establish a formal program to quickly evacuate Afghans who have not been able to leave the country through the U.S.-led Operation Allies Welcome, which provides a fast-track primarily for Afghans who were affiliated with the U.S.

But the group has run into a wall. Since U.S. troops pulled out of Afghanistan Aug. 30, advocates say, none of their submitted applications have been processed. Meanwhile, an overwhelmed USCIS issued an agencywide request for volunteers to process applications from Afghanistan and has started training additional staff to assist with the surge in requests.

“USCIS is actively assigning additional staffing resources to assist with the current parole-application workload,” spokeswoman Victoria Palmer said. “The agency will have significantly more staff assigned to this workload in the coming weeks.”

Nearly 70,000 Afghans have been paroled into the U.S. as part of Operation Allies Welcome. An additional 20,000 Afghans have separately applied for parole since August, Palmer said. The agency normally receives fewer than 2,000 requests per year for people from all nationalities.

Since July 1, USCIS has approved just 93 parole applications for Afghans. Some are still in their home country, while others have made it to third countries and are awaiting further processing, Palmer said.

Applicants must complete in-person vetting and biometrics screenings before they can be approved for humanitarian parole. Because the embassy in Kabul is closed, applicants must travel to a third country to do so, Palmer said. That’s assuming the Taliban lets them leave.

The agency issues eligible applicants a notice advising them of the travel requirement and, if cleared, the State Department gives the applicant a boarding letter indicating they have permission to enter the U.S. Then they can take a commercial flight, at their own expense.

Congress created humanitarian parole under the Immigration and Nationality Act of 1952. It was first used in 1956 to let in more than 20,000 Hungarians after the country’s failed revolution. Recently, its use has fallen into individual cases and established programs such as the Central American Minors program, which started in 2014.

Project ANAR founders see it as the only immediate option for many who remain in danger under Taliban rule.

Many of the Project ANAR applicants don’t qualify for Special Immigrant Visas for Afghans or priority designation under the Refugee Admissions Program because they didn’t work for the U.S. Instead, they are Afghan government workers, teachers, journalists, widows and other women and girls. Some have U.S. citizen family members who could sponsor them for permanent residency. Many could qualify for asylum.

“We’re in a distinct moment right now,” Mohmand said. “We just don’t have years to spare. The goal truly is to get people safely here.”

Support for the group poured in through September, and they’ve now raised more than $350,000 to pay the $575 USCIS filing fee for each application. Funds are funneled through the San Francisco nonprofit Pangea Legal Services.

Mohmand believes the U.S. owes all Afghans, not just those who worked directly with the federal government, a path to escape.

“The actions of the U.S government and army created this issue. The U.S. legitimized the Taliban with the Doha peace agreement and then quite literally handed them the government,” she said, referring to a deal signed by the Trump administration and the Taliban last year. “The U.S. has meddled everywhere, but I think there is a specific duty owed to the people of Afghanistan because of decades of occupation.”

The group’s approach is risky. USCIS could keep the money and decide to deny the applications. But Mohmand hopes the strategy — and payments — will instead pressure the federal government to act.

Project ANAR is not the only organization pushing for humanitarian parole for Afghans. In a letter the group sent last month to President Biden, signed by other nonprofits and individual law firms, advocates said they expect a total of at least 30,000 applications to be submitted to the USCIS, garnering the agency more than $17 million in fees.

Theresa Cardinal Brown, who oversees immigration policy at the Bipartisan Policy Center and who worked at the Department of Homeland Security under the Obama administration, said the Biden administration was lurching from crisis to crisis on immigration, some long in the making, even before the Afghanistan pullout.

Processing times at USCIS are several months long, even for basic requests such as replacing a green card. In recent years, the agency twice tried to raise fees but was halted by lawsuits.

Brown said she understands the urgency behind humanitarian parole requests, but the agency needs time and resources to build capacity.

“Right now everything is urgent. Do you prioritize the people who are in Afghanistan, or the people who are here on military bases, or the people who are on bases overseas?” she said. “Every time we have an extraordinary migration event — Cubans and Haitians, Central American unaccompanied minors, Afghans — we suddenly have to pull resources from other places and act like we’ve never experienced this before. Why don’t we prepare for migration emergencies just like we do natural disasters?”

Mohmand worked with another Afghan American lawyer colleague, Laila Ayub, based in Virginia, to develop the initial immigration resource document. Afterward, a former University of California, Berkeley peer, Saamia Haqiq, offered her time. Haqiq had experience working for immigration and resettlement organizations and had just quit her job.

“It all happened so quickly,” Mohmand said. “And now it’s quite literally Saamia and Laila’s full-time job, and I work on this part time through my job. It has changed our lives.”

Haqiq has since filed more than 20 applications on behalf of family members, including a 25-year-old cousin who was a TV reporter at TOLO News, one of the biggest news outlets in the country, and an activist promoting education for women.

“The work he did that he was so proud of doing he now regrets because of the risk it puts on his family,” she said. “The Taliban doesn’t focus on a single individual — usually they target an entire family.”

Nadia D., 49, of Fairfax, Virginia, helped 96 extended relatives in Afghanistan apply for humanitarian parole through Project ANAR. She asked the Los Angeles Times not to publish her last name out of fear of retribution for her family members.

Her family includes former Afghan government workers, teachers, engineers, nonprofit workers and journalists. None are able to work, she said, and the children are no longer in school. Taliban fighters knock on her nephew’s door nightly asking where he is, she added.

Nadia said she’s glad that thousands of Afghans who worked for the U.S. have been evacuated. But she hopes the federal government will do more.

“Everyone has the right to happiness and the right to live a safe life,” Nadia said in Dari through an interpreter. “I will pray that my family is also able to have that.”