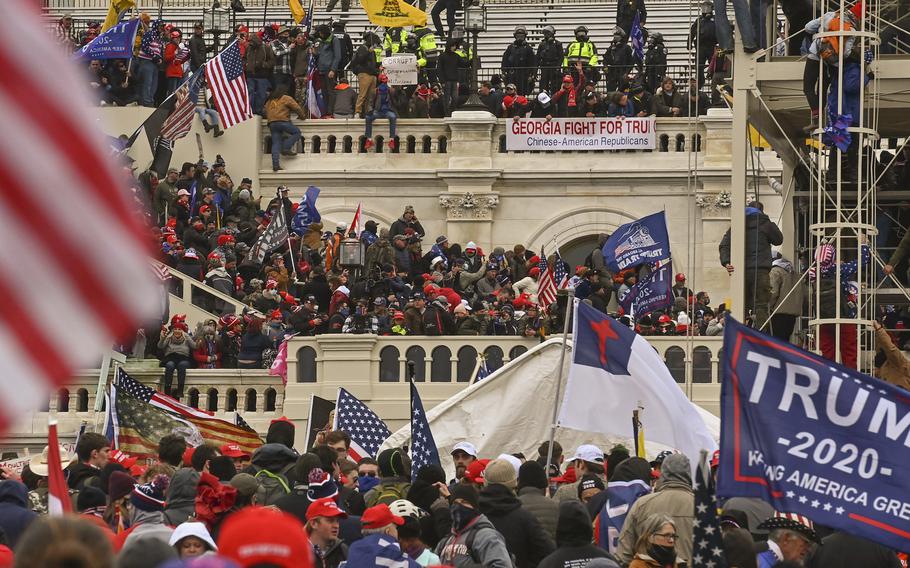 Those subpoenaed to provide testimony and documents include scholar John Eastman, who outlined a legal strategy in early January to delay or deny Joe Biden the presidency, and former New York City police commissioner Bernard Kerik, who led efforts to investigate voting fraud in key states. Both were present at the Willard during the first week in January.

All of them reportedly participated in discussions about challenging the election results, though Stepien, according to published reports, was initially skeptical of claims made by some of Trump’s legal advisers, including his former personal attorney Rudolph Giuliani.

Eastman has become a witness of keen interest to the committee because of the role he played laying out legal scenarios to deny Biden the presidency, including during an Oval Office meeting on Jan. 4 with Trump and former vice president Mike Pence.

At the command center, Eastman huddled with Trump advisers including Giuliani, former White House chief strategist Stephen Bannon, and Kerik to develop plans to pressure Pence to take actions on Jan. 6 that Eastman suggested were within the vice president’s powers. Those actions included blocking or delaying the counting of electoral votes from battleground states where results were in dispute.

Those states became the focus of the effort inside the Willard hotel command center to find evidence of fraud that might compel state legislators to challenge Biden’s victory.

In those first days in January, Trump allies in the command center called members of Republican-dominated legislatures in swing states that Eastman had spotlighted in his memos, including Pennsylvania, Georgia and Arizona, encouraging them to convene special sessions to investigate fraud and to reassign electoral college votes from Biden to Trump.

Kerik said he had been working with Giuliani since two days after the election and that they continued until Jan. 19. “I believed until Inauguration Day that something could be done — that’s why the fight was still going on,” Kerik told The Washington Post in a recent interview.

Kerik and Giuliani stayed in Washington in early November at the Mandarin Oriental hotel, according to Kerik, and moved to the Willard at the end of December.

Eastman stayed at the Willard from Jan. 3 until after breakfast on Jan. 8, according to records showing that the hotel charged $1,407 for his lodging and meals during that time.

He arrived at the Willard on the same day when Trump organized an Oval Office meeting to discuss replacing then-acting attorney general Jeffrey Rosen with Jeffrey B. Clark, a Justice Department close to Eastman who proposed that the department push for probes of Trump’s election fraud claims in Georgia and elsewhere. Rosen, other department officials and White House counsel Pat Cipollone all threatened to resign during the three-hour meeting if Clark were appointed.

The committee had previously subpoenaed Clark who received a postponement of his scheduled appearance last week after his lawyer abruptly resigned. The committee had also sought documents Eastman had prepared making the case that the vice president had authority under the constitution to delay or reject electoral results from key states.

Eastman’s first memo on the topic, only two pages long, described a six-point plan by which Pence could effectively commandeer the electoral counting process and enable Trump to win. The memo was first revealed last month in the book “Peril,” by Washington Post writers Bob Woodward and Robert Costa.

Eastman has said that memo was a “preliminary draft” of a more complete and nuanced memo that outlined multiple possible outcomes following the joint session of Congress on Jan. 6. The ideas in the memos were the basis for a discussion of options Pence had with Eastman and Trump in the Oval Office on Jan. 4, he has said.

However, Pence had still resisted embracing Eastman’s plan. On the evening of Jan. 5, according to “Peril,” Trump called over to Giuliani and then to Bannon, who were both at the Willard at the time, according to the book, which reported some details of the events at the Willard that day. Trump told Bannon that Pence had been “very arrogant” when the two discussed the matter earlier in the day, the book reported. The following day, Eastman spoke at the rally on the Ellipse.

Neither Eastman nor Kerik immediately responded to messages from The Post.

On Dec. 23, Flynn retweeted a post about the possibility of invoking “the Pence card” to turn around the election results. At the time, efforts were continuing in multiple states to challenge election results in court. But as those legal efforts failed and Jan. 6 neared, the Eastman strategy became the focus of attention at the White House and with Trump’s allies at the Willard.

In its letter to Flynn, the committee asked specifically about Flynn’s attendance at a Dec. 18, 2020 meeting in the Oval Office “during which participants discussed seizing voting machines, declaring a national emergency, invoking certain national security emergency powers and continuing to spread the message” that the 2020 election was tainted by fraud.

The letter noted that on Dec. 17, Flynn told a Newsmax TV interview about seizing voting machines, foreign influence in the election, and the purported precedent for deploying military troops and declaring martial law to “rerun” the election.

It asked Flynn for all documents and depositions related to these matters.

Miller was in touch with Trump on Jan. 6 at least twice according to reporting by The Washington Post, helping him draft a statement that evening. He was his spokesman for Trump during several key periods: Before Nov 3., through much of the transition, and then again after Jan 6., during the impeachment.

Miller was also in touch with Giuliani and others in the war room about their efforts in the days leading up to Jan. 6, according to Post reporting. But he was not at the White House on the day of the attack, people familiar with the matter said.

When Trump issued a false statement saying Pence had the authority to block certification, and Pence agreed with Trump’s position, Pence chief of staff Marc Short called Miller to raise objections with the statement.

Miller also drafted tweets and shared them with the White House — that the president did not send — urging his supporters to leave the Capitol on the afternoon of Jan. 6, The Post has reported. Miller was also involved in devising a poll that was designed to show Republican lawmakers they would face political repercussions if they voted to impeach Trump, and the poll was circulated.

Stepien, once an aide to former New Jersey Gov. Chris Christie and 2016 Trump campaign staffer, served as White House political director, and then joined the 2020 campaign before being named campaign manager this summer. A data guru, he had privately told others for months that Trump had difficult odds of winning.

Flynn, Stepien and Miller also did not immediately respond to messages from The Post.

Also on the list is McCallum, a national executive assistant to Trump’s 2020 reelection campaign who “reportedly participated in efforts to spread false information about alleged voter fraud in the November 2020 election and to encourage state legislatures to alter the outcome of the November 2020 election,” according to the transmittal of the subpoena issued by the committee.

“Specifically, there is a publicly available recording of a voice mail that Ms. McCallum reportedly left for an unknown Michigan state representative,” writes Rep. Bennie G. Thompson, D-Miss., the committee’s chairman. “In the recording, Ms. McCallum wanted to know whether the Trump campaign could ‘count on’ the representative and said that the individual had the authority to appoint an alternate slate of electors based on purported evidence of widespread election fraud.”

The committee requested that McCallum provide documents by Nov. 23 and appear for a deposition on Nov. 20.

The committee has already sought information from Bannon, who was the lead political strategist for the Willard operation. In seeking to compel testimony from Bannon, the congressional panel investigating Jan. 6 cited his reported presence at the “’war room’ organized at the Willard.” The former White House adviser refused to cooperate with the panel, citing Trump’s invocation of executive privilege.

In response to his defiance, the House voted last month to hold Bannon in contempt of Congress and referred the matter to the Justice Department for possible criminal prosecution.