by
Nick Miroff and Sean Sullivan
• The Washington Post • November 8, 2021 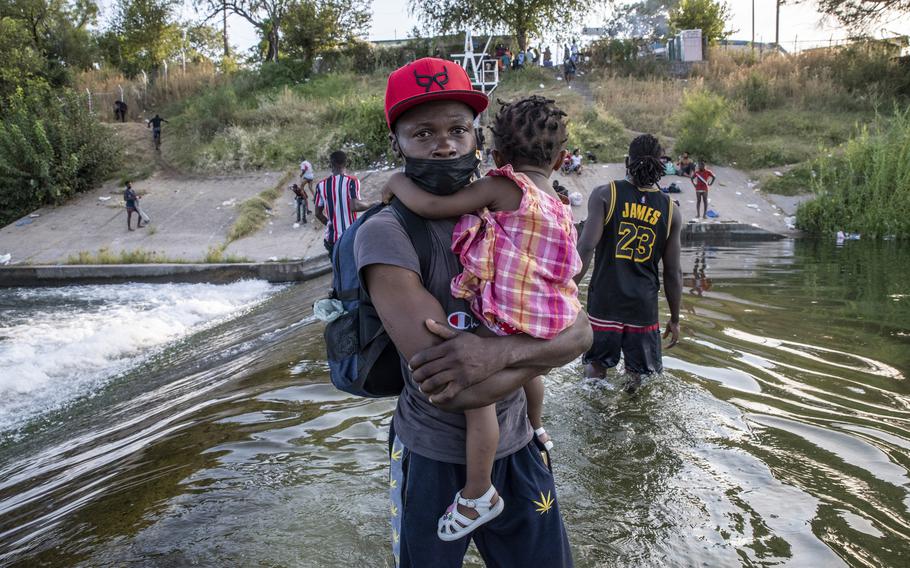 Haitian migrants in the Rio Grande at the U.S.-Mexico border. (Sergio Flores/for The Washington Post)

WASHINGTON — Illegal border crossings and coronavirus cases were both rising this summer when a group of Biden administration officials developed a plan to vaccinate migrants in U.S. custody, viewing the shots as a sensible public health measure.

But just before the plan was rolled out, it was opposed by one of President Joe Biden’s top aides, Susan Rice, and other senior officials who worried that it would invite more illegal crossings. Some aides responded that migrants would not pay smugglers and take a dangerous journey just for a vaccine — but they were overruled, according to four people with knowledge of the reversal.

The episode reflects the fractures spreading in the White House over Biden’s immigration policies and his dismal ratings on U.S.-Mexico border issues. Several top aides want tougher enforcement measures, and the president’s team is gripped with fear that any misstep could trigger a new crisis, according to seven current and former Biden officials who spoke on the condition of anonymity to describe the internal tensions.

A major policy shift or purge is not imminent, these officials say, but the national security centrists on Biden’s team have asserted more control, and the left-leaning advisers who pushed to quickly reverse President Donald Trump’s policies have lost ground.

The change is evident in several recent moves. The administration is expanding its enforcement partnership with Mexican authorities. It is adamantly defending the Title 42 health code used to “expel” border crossers. It aggressively used deportation flights to send nearly 8,000 Haitians back to their destitute homeland.

Amid Democrats’ electoral setbacks last week in Virginia and New Jersey, some voters expressed a sense that Biden was not taking charge of events, putting greater pressure on White House aides to avoid further scenes of chaos at the border.

“It’s a question of control, and whether they appear to be in control, especially coming hard on the heels of the Afghan evacuation, which looked like it was ragged and not under control,” said a Biden appointee, speaking on the condition of anonymity to discuss sensitive matters.

From the outset, Biden’s immigration policy has been shaped by a team with starkly differing philosophies on border security. Aides described fault lines that mirror broader divisions in the party, pitting moderates against liberals with close ties to advocacy organizations.

Tyler Moran, a veteran activist who is Biden’s senior adviser for migration, played down the differences in an interview. “There are internal discussions that are deliberative,” she said. “In the end, we’re one team, speaking with one voice.”

Biden, aware of the political pitfalls, has not traveled to the southern border as president and rarely talks about immigration publicly. He appeared to stumble again recently when he initially dismissed as “garbage” reports that his administration was negotiating large cash payments to families separated at the border during the Trump administration. Aides acknowledged the next day that negotiations are ongoing and said the president would accept a settlement. On Saturday, Biden said he was taking issue with was the reported payment amounts, and added that separated families “deserve some kind of compensation.”

Having campaigned on promises to be more welcoming of immigrants, Biden’s team is now consumed with the same challenge that occupied Trump: how to deter illegal crossings. Biden officials say their success should be defined not by monthly enforcement data, but by making activity at the border more humane and orderly.

That goal has been undercut by soaring crossings and the accompanying scenes of disarray, including the recent arrival of 15,000 Haitians to a squalid camp in Del Rio, Tex. Biden officials responded by launching scores of Title 42 expulsion flights that halted the influx but left the president squeezed between Republican attacks and Democratic disappointment.

“They are not getting credit from advocates for letting people in and being fairly humanitarian, and not getting credit from Republicans for being tough with Title 42,” said Andrew Selee, president of the nonpartisan Migration Policy Institute. “They’ve got people on the left thinking they’re draconian and people on the right thinking they’re soft — and so they’re losing both sides.”

That is compounded, according to two Biden appointees, by the lack of a single figure responsible for immigration policy. “We have had multiple people pushing multiple border policies, and no clear direction,” said one appointee, speaking on the condition of anonymity to describe sensitive internal matters.

Several top immigration advisers have come to the White House only to leave quickly, including Roberta Jacobson, Amy Pope and Alida Garcia.

More recently, a group of Biden aides more attuned to national security and less sensitive to the activist community has begun asserting control over immigration, according to five current and former administration officials. They include Jake Sullivan, the president’s national security adviser; Liz Sherwood-Randall, his homeland security adviser; Rice; and White House chief of staff Ron Klain, who has dialed back his involvement since late summer but still relies on these and other officials, according to one person familiar with the dynamic.

These advisers view the border “almost entirely from a political lens,” said one Biden appointee who is sour on the administration’s pro-enforcement shift.

White House principal deputy press secretary Karine Jean-Pierre played down the divisions and said officials are results-oriented, telling reporters the entire staff has one goal: “Every single member of this administration, from the president on down, is committed to building a fair and orderly immigration system.”

Another figure with growing clout in the enforcement debate is Jennifer Sokoler, a White House attorney and former clerk to Supreme Court Justice Sonia Sotomayor who had little experience in immigration policy before joining the administration, two colleagues said. A White House official said Sokoler’s role is to ensure that Biden policies are lawful.

Biden’s plight is striking in part because the administration took office with sweeping promises to put immigration on a moral footing after a Trump approach that many Democrats saw as cruel and racist, from his push to build a border wall to his promise to ban Muslim immigrants to his reference to “shithole” countries.

Biden officials immediately announced that they would not use the Title 42 law to expel minors on public health grounds, only to be overwhelmed weeks later as Border Patrol tents and holding cells filled with migrant teens and children.

The fault lines in the White House have been hardened by the rising numbers, pitting officials from the National Security Council and the White House Counsel’s Office, who want to toughen enforcement, against the president’s immigration advisers, some of whom have spent years insisting that deterrent policies are ineffective.

They include Moran, Esther Olavarria and other advocates who arrived with a deep mistrust of U.S. Customs and Border Protection and U.S. Immigration and Customs Enforcement, according to three appointees.

“There are a lot of preconceived notions and distrust based on years of yelling at these agencies from outside,” one Biden appointee said. Another added: “Some administration officials have had trouble recognizing how border dynamics actually work. They have had trouble accepting deterrence policies related to illegal crossings, but that is an inescapable part of border management.”

Advocacy groups cheered when they were hired, but more recently Olavarria and Moran have found themselves in the awkward position of fielding liberals’ anger at Biden’s actions.

Last month, dozens of activists staged a virtual “walkout” from a meeting with Olavarria and others to express frustration at Biden’s preparations to revive Trump’s “Remain in Mexico” program, under federal court order. The group included Alex Mensing, who personally led migrant caravans through Mexico in 2018 with the group Pueblo Sin Fronteras.

One reflection of the White House’s struggles is the low profile of Vice President Kamala Harris, who has little role in the internal debates, the current and former officials said, including two who characterized her as “completely irrelevant.”

A Harris aide said the vice president is regularly briefed on immigration, together with Biden and separately. Harris is also in touch with the president on major decisions, said the aide, who spoke on the condition of anonymity to describe the dynamic.

Biden last spring tasked Harris with addressing the “root causes” of illegal migration from Central America. She quickly fell into a political morass of Republican mockery and left-wing outrage at her calls for migrants to stay home.

Since then, Harris has mostly kept her distance from border issues, and the growing share of migrants arriving from beyond Mexico and Central America has left the root-causes strategy looking inadequate.

“This is much bigger and more hemispheric than we were thinking in the beginning,” said one administration official the White House allowed to speak to The Washington Post on the condition that they would not be identified. “What we’ve seen in recent months is something of much greater scale.” Biden officials say they are improving coordination on migration with nations throughout the Western Hemisphere.

Few issues illustrate the shift within Biden’s orbit as vividly as the fight over the Remain in Mexico policy.

Behind the scenes, several Biden advisers have been arguing for the reinstatement of the policy, formally known as the Migrant Protection Protocols, which requires asylum seekers to wait outside the United States while their claims are processed in American courts. In discussions, Biden officials refer to the program by its legal code “235(b)(2)(C)“ to avoid identifying the Trump-era policy by name.

The MPP program reduced illegal crossings but was denounced by human rights groups that documented rampant kidnappings and attacks on migrants left waiting for months or longer in dangerous Mexican border cities.

Biden had campaigned actively against MPP, and first lady Jill Biden recorded a video at the notorious migrant camp in Matamoros, Mexico, where thousands of asylum seekers were stranded under Trump.

Once in office, Biden quickly ended MPP and began allowing migrants in Mexico to enter the United States pending a decision on their asylum requests. But the GOP-led states of Texas and Missouri won a legal injunction, later affirmed by the Supreme Court, forcing a restart to MPP on the grounds that Biden’s decision appeared arbitrary.

Biden officials are preparing to restore the program this month, if Mexico agrees, but they say they will conduct the program differently. “We’re completely committed to do it in a humane way, and there are so many obvious ways it can be better than last time,” an administration official said.

The Department of Homeland Security issued a memo on Oct. 29 again trying to terminate MPP, but it will not take effect unless the court injunction is lifted. That leaves the fate of the policy largely in the hands of Judge Matthew J. Kacsmaryk of the U.S. District Court for the Northern District of Texas, a Trump appointee, and the conservative-leaning Court of Appeals for the 5th Circuit.

Homeland Security Secretary Alejandro Mayorkas said the administration is moving forward with its plan to have asylum officers from U.S. Citizenship and Immigration Services adjudicate the claims of migrants apprehended along the border, with the goal of taking pressure off immigration courts buried under a backlog of 400,000 pending asylum cases. But that program probably won’t be ready for months.

U.S. courts reject the vast majority of asylum claims on the grounds that the applicants are not victims of persecution. The cases typically take years to complete, however, and rejected asylum seekers who arrived before Nov. 1, 2020, are not a priority for arrest under the Biden administration’s new enforcement policies.