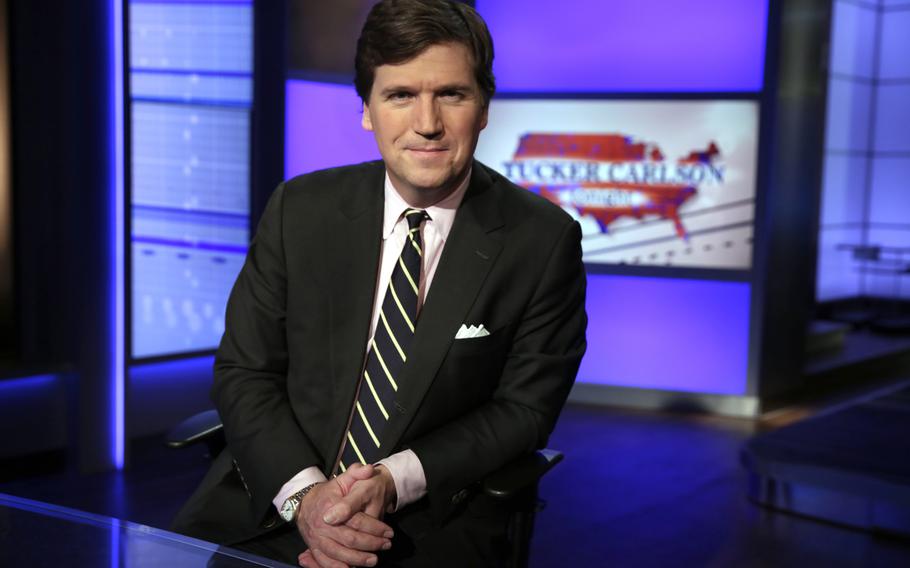 Did the Fox News host want first dibs on an interview with an attorney for the Russian internet entrepreneur accused of hacking into Democratic servers in 2016 - one of a compendium of claims included in an explosive dossier about Russia’s purported ties to Donald Trump’s campaign? (Richard Drew/AP)

The public relations executive had an offer for Tucker Carlson.

Did the Fox News host want first dibs on an interview with an attorney for the Russian internet entrepreneur accused of hacking into Democratic servers in 2016 - one of a compendium of claims included in an explosive dossier about Russia’s purported ties to Donald Trump’s campaign?

That question was posed in a February 2017 email from Charles Dolan Jr., a diligent spin doctor with Irish Boston flair who, former colleagues said, boasted ties to Democratic politics and extensive contacts inside the Kremlin. “Yes, definitely,” Carlson replied that evening, ultimately conducting the interview four days later. “This is great.”

The media blitz formed part of an effort by Dolan to discredit claims in the Steele dossier, prepared by a former British intelligence officer, Christopher Steele. The day after BuzzFeed News published the unverified information, Dolan wrote to his client, the entrepreneur Aleksej Gubarev, who would later unsuccessfully sue BuzzFeed for defamation, according to emails exhibited in that case.

“I’m hoping that this is exposed as fake news,” Dolan wrote. “I may be wrong but I have doubts about the authenticity.”

Now, a grand jury is alleging that Dolan, 71, was behind at least some of the claims included in the dossier, according to a 39-page indictment obtained by John Durham, the special counsel probing the Justice Department’s Russia investigation. The indictment also suggests that Dolan, who worked on both Bill and Hillary Clinton’s presidential campaigns and on a State Department advisory board during the Clinton administration, was so partisan that any information he provided would be suspect.

Dolan is left unidentified in the charges against Igor Danchenko, a Russia analyst who, the indictment claims, provided the core allegations included in the Steele dossier. But a lawyer for Dolan confirmed he was the unnamed executive cited in the document.

The new allegations make Dolan one of the most mysterious figures in the saga of the Steele dossier.

The dossier was tangential to the official inquiry led by special counsel Robert Mueller but nonetheless captured public imagination and created debate over geopolitics, intelligence gathering and media ethics. According to the indictment, Dolan, who helped handle global public relations for the Russian Federation for eight years ending in 2014, fed the dossier before he fought against it. And his contacts and credibility in both instances rested on his extensive work for Russia, much of which he performed when he was affiliated with Ketchum, a public relations firm headquartered in New York.

“The fact that the individual had long-standing relationships in that area of the world is one reason the Justice Department may look at this part of the case with a more careful lens - to see on whose behalf he was actually acting,” said Joshua Ian Rosenstein, an expert on the Foreign Agents Registration Act at the D.C.-based Sandler Reiff Lamb Rosenstein and Birkenstock firm.

While the indictment argues that Dolan’s political loyalties made his information unreliable, it leaves unaddressed the question of motivations for his alleged actions.

Dolan gave no indication that he was sufficiently committed to any candidate to turn his professional assets toward partisan ends, former colleagues and other associates said. Val Gurvits, an attorney for Gubarev in the BuzzFeed case, said he found him to be highly professional. “I would work with him again,” the Boston-based lawyer said.

Dolan racked up numerous, but not high-profile, roles in Democratic circles. He served as a state chairman for President Bill Clinton’s 1992 and 1996 campaigns and remained active within the Democratic Party alongside his public relations work. He advised Hillary Clinton’s 2008 campaign and served as a volunteer for her 2016 campaign, according to the indictment. The month after he informed a Russian associate that he would be attending a reception for Clinton in July 2016, the indictment states, the associate told a contact in Russia that Dolan would “take me off to the State Department [to handle] issues of the former USSR.”

At the same time, Dolan told authorities that campaign officials “did not direct, and were not aware of” his communications with Danchenko and other Russian nationals. And a longtime aide to both Bill and Hillary Clinton said she had no recollection of Dolan. A spokesman for Hillary Clinton did not respond to a request for comment.

“We all understood and appreciated his Democratic bona fides, but he was never someone I would have ever considered hyperpartisan,” said a former public relations colleague.

The allegations involving Dolan, who moved to the D.C.-based public relations agency kglobal in 2014, according to his LinkedIn profile, came to light as part of charges filed Thursday against Danchenko, whose attorney attempted to enter a plea of not guilty on his behalf. The two men were introduced by Fiona Hill, the former White House adviser and Trump impeachment witness, who connected Danchenko to Dolan after the analyst asked if she knew anyone at Ketchum, according to a person familiar with the interactions who spoke on the condition of anonymity to recount private matters. Hill declined to comment, and a lawyer for Danchenko did not respond.

Dolan was well-known among Russia experts, and, according to the indictment and the recollections of former colleagues, well-connected in Russian President Vladimir Putin’s inner circle. He “frequently interacted with senior Russian Federation leadership,” the indictment states.

“He did bring a level of interest and expertise beyond the normal influencer-for-hire,” said one former colleague. “He was very trusted by Putin’s people.”

The fees charged for that work, which included a disbursement of nearly $80,000 to Dolan for a sixth-month period ending May 2012, were detailed in filings made by Ketchum, whose work with Russia began when St. Petersburg played host to the Group of Eight summit of leading economic powers in 2006, according to current and former employees of the agency. Dolan left the agency in 2005 but continued to work as an “external freelancer” through 2012, said a spokeswoman, Susannah Sheppard.

Danchenko, who was arrested on Thursday, stands accused of making false statements to the FBI about his communications with a public relations executive with a focus on Russia who maintained long-term ties to the Democratic Party. He is alleged to have stated that he did not discuss information in the dossier with the individual, referred to only as “PR Executive-1,” when in fact, the indictment claims, some of the material was “gathered directly” from the executive.

An attorney for Dolan, Ralph Martin, confirmed that his client was the executive identified in the indictment but said he had no comment because he was a “witness in an ongoing case.” Martin did not respond to detailed follow-up questions.

Among the information purportedly provided by Dolan that later made it into the dossier were rumors about Paul Manafort’s dismissal as Trump’s campaign chairman, according to the indictment. In the summer of 2016, Dolan relayed information, from a “GOP friend,” as he told Danchenko, that Manafort had been damaged by revelations about his work in Ukraine. Two days later, the indictment alleges, that information appeared in one of Steele’s reports.

The two men also worked together on preparations for a 2016 conference in Moscow, according to the indictment, which involved a June planning trip undertaken by Dolan, who stayed at the Moscow hotel and toured the presidential suite where the dossier would later claim Russian intelligence had a salacious and incriminating tape of Trump. Danchenko, who was already in Moscow, met with Dolan in June 2016 before flying to London to provide information that would later appear in the dossier, the indictment claims, setting forth the timeline of these encounters without stating that Dolan was the source for specific claims about the purported tape.

Reflecting on his interactions with Danchenko around that time, Dolan told an acquaintance in the United States that he believed the analyst “worked for FSB,” referring to the Russian security agency, according to the indictment. Dolan later admitted to the FBI, the indictment states, that he had “fabricated” the basis of certain details he had provided to Danchenko.

He also reportedly said he was unaware of the specifics of Danchenko’s work, or that the information they were trading would be transmitted to the FBI. Dolan’s “historical and ongoing involvement in Democratic politics,” the indictment asserts, “bore upon” his “reliability, motivations, and potential bias as a source of information” for Steele’s reports.

Danchenko, for his part, in addition to denying that he had used specific information from Dolan when he was interviewed by the FBI in 2017, observed that the public relations executive was “a bit naive in his liking of Russia.”

The son of a decorated World War II veteran who sold newspapers during the Great Depression and fought in the Battle of the Bulge, Dolan attended the University of Massachusetts at Amherst and Harvard University’s Kennedy School of Government, according to his kglobal bio. The agency did not respond to a request for comment.

He has taught at George Washington University and advised clients as disparate as political candidates and the director of corporate affairs at the University of Limerick in Ireland. An avid hunter, he trains spaniels to join him in pursuit of birds, former colleagues said.

During the 2016 campaign, Dolan sought to leverage his experience in Russia to help make sense of the Kremlin’s perspective on the race. In a since-deleted blog post on kglobal’s website, he underscored the need for accurate transcripts in light of confusion over comments attributed to Putin calling Trump “brilliant.”

With Trump in office, Dolan’s online commentary became more biting. He called attention to the indictments of figures within Trump’s political circle in messages posted with what appears to be his since-deleted Twitter account, according to screenshots reviewed by The Washington Post.

Turning Trump’s epithet for Hillary Clinton back on him, Dolan asked, “Who deserves the Moniker ‘Crooked.’”

The Washington Post’s Shane Harris contributed to this report.