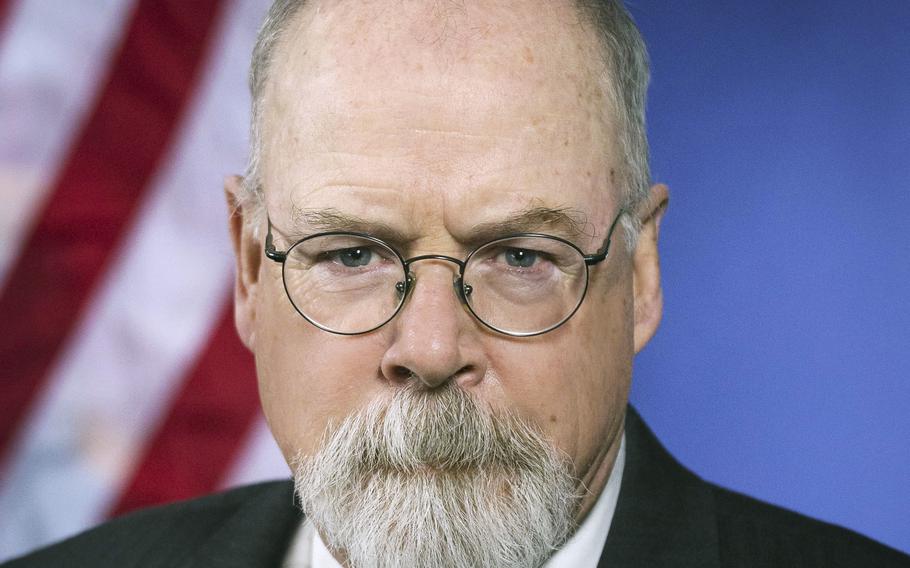 FILE - This 2018 portrait released by the U.S. Department of Justice shows Connecticut’s U.S. Attorney John Durham. Tasked with examining the U.S. government’s investigation into Russian election interference, special counsel John Durham charged a prominent cybersecurity lawyer on Thursday, Sept. 16, 2021, with making a false statement to the FBI. The case against the attorney, Michael Sussmann of the Perkins Coie law firm, is just the second prosecution brought by special counsel John Durham in two-and-a-half years of work. (U.S. Department of Justice via AP)

An analyst who was a primary source for a 2016 dossier of allegations against Donald Trump has been arrested on charges stemming out of special counsel John Durham’s probe of that matter, a spokesman for Durham said.

Igor Danchenko’s role in providing information to British ex-spy Christopher Steele, who compiled the accusations about Trump in a series of reports, has long been a subject of investigators’ scrutiny.

Trump and his supporters have accused senior FBI officials of conducting a partisan effort to discredit him, while the FBI’s defenders say the agency was obligated to examine allegations of Russian interference and possible collusion with the Trump campaign during the presidential election.

Durham’s probe into that FBI investigation has also led to an indictment of a lawyer connected to Democrats, on a charge he lied to the FBI.

The charges against Danchenko were not immediately known, though they are expected to be unsealed later Thursday, according to people familiar with the matter. The arrest was first reported by the New York Times.

Steele’s reports were based in large part on a person he called his “primary sub-source,” which was Danchenko, according to people familiar with the matter. Steele presented the dossier to the FBI, and it became part of the basis for secret surveillance court orders targeting former Trump adviser Carter Page.

An inspector general report - which was highly critical of how the FBI used Steele’s allegations - found that when the FBI later questioned Danchenko about the allegations contained in Steele’s dossier, Danchenko tried to distance himself from some of the claims, saying the dossier overstated the information he had originally provided to Steele.