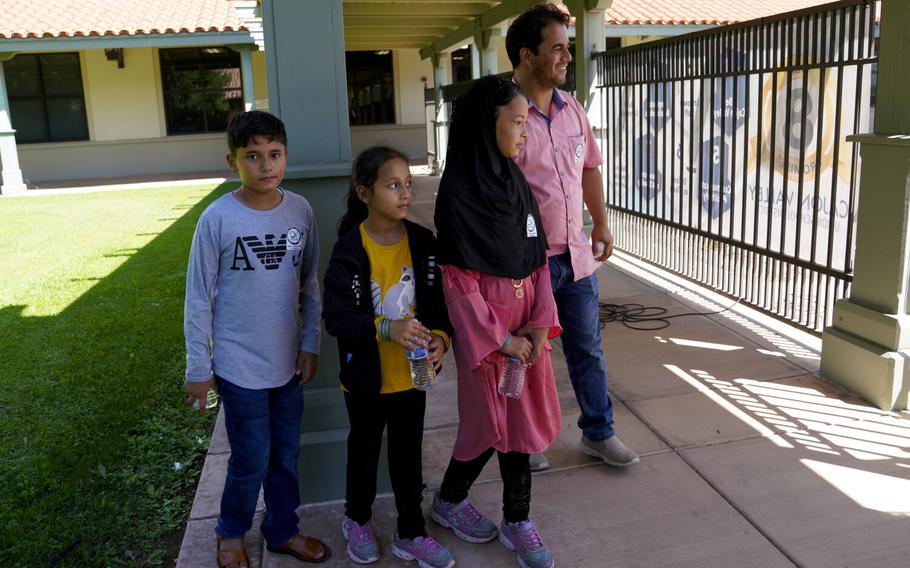 In El Cajon, CA., at Cajon Valley Union School District office on Thursday, Sept. 2, 2021, Mohammad Faizi spoke about the difficulty of gaining access to enter Kabul airport with his wife and their 5 children. The family of seven then waited several days at the airport before being evacuated out of Afghanistan, back to the U.S. where they live in El Cajon, Calif. Left to right, Ahmad, 13, Parwana, 7, Palwasha, 10, and Mohammad Faizi. (Nelvin C. Cepeda, The San Diego Union-Tribune/TNS)

(Tribune News Service) — The Cajon Valley Union School District in East County says that the last family with students from El Cajon, Calif., who were trapped in Afghanistan is heading home.

The families were unable to leave amid the chaos when U.S. troops pulled out in mid-August after 20 years of occupation.

The district said that Superintendent of the San Juan School District Kent Kern said that nine families and a total of 24 students are still stranded and in need of rescue.

"We are so happy to have all of our Cajon Valley students and their families safe and look forward to seeing our last few students in person in their classrooms very soon," the statement from the district said. "We stand united with the San Juan Unified School District and all other U.S. citizens, (those with special immigrant visas) and allies, and urge our government to take action to bring them home."

A press release from the office of Issa said that the father of the latest rescued El Cajon family, "which still must remain anonymous due to the danger to other relatives in Afghanistan," was home in San Diego County when Kabul fell. But the mother and their four children "were forced into hiding and moved from several safehouses as they eluded the Taliban for several months."

Issa was the first person contacted by David Miyashiro, superintendent of Cajon Valley, and was informed that several families that included schoolchildren were unable to escape Afghanistan.

"From the day David first called me, our lives were changed, and we embarked on a daily mission to rescue these families," Issa said in a statement. "David and the team he brought together has led from the start and tirelessly worked to bring everyone home. (But) even as we know these missing schoolchildren are coming home, we are reminded that there are so many more, perhaps several hundred more, from California that are still trapped in Afghanistan. Our work is not yet close to complete."

On Aug. 24, Cajon Valley told The San Diego Union-Tribune that many families from the district were unable to get to the airport in Kabul after a summer trip to visit relatives.

At that time, Miyashiro and Mike Serban, the district's director of Family and Community Engagement, said the children ranged from preschoolers to high school students at several area schools, and that the students went there on summer break with their families to visit extended family members.

Miyashiro said the families involved were on special visas for U.S. military service and that the Department of Defense considers them allies.