by
Dino Grandoni and Steven Mufson
• The Washington Post • November 2, 2021 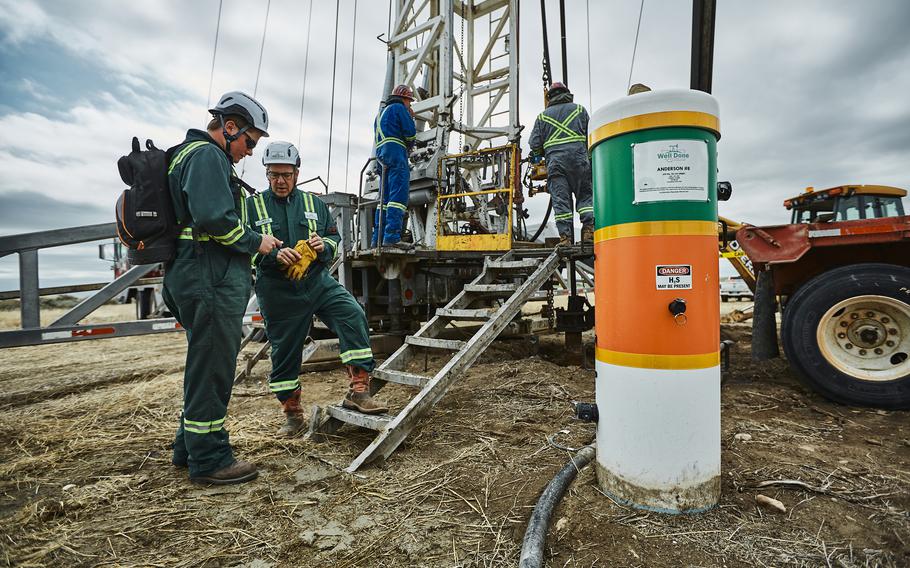 The Biden administration unveiled a sweeping set of policies Tuesday to cut emissions of methane, a potent greenhouse gas, from oil and gas operations across the country. The proposals, announced at the U.N. climate summit known as COP26, represent one of the president’s most consequential efforts so far to combat climate change.

Proposed rules from the Environmental Protection Agency could establish standards for old wells, impose more frequent and stringent leak monitoring, and require the capture of natural gas found alongside oil that is often released into the atmosphere. They mark the first time the federal government has moved to comprehensively tackle the seepage of methane across U.S. oil and gas infrastructure.

Separately, more than 90 countries have signed the Global Methane Pledge, which requires a 30% cut in methane emissions by 2030, one of the Biden administration’s priorities for the current climate summit. The pledge’s signatories now include six of the 10 largest methane emitters and about 45% of global methane emissions.

Methane, a main component of natural gas, is the world’s second-largest contributor to climate change among greenhouse gases. Although it dissipates more quickly than carbon dioxide, it is 80 times more powerful during the first 20 years after it is released into the atmosphere.

Previous efforts by the Obama administration to curb methane mostly focused on newer drilling sites and operations on federal lands. The oil industry has opposed federal methane regulations in the past, but many major companies have come to embrace them rather than face a patchwork of state rules.

Frank Macchiarola, senior vice president for policy, economics and regulatory affairs at the American Petroleum Institute, said the industry supports “a cost-effective rule” and has been working with Biden officials since the presidential transition to help craft the EPA requirements.

Tackling methane is high on the agenda at the U.N. negotiations, and the United States and the European Union have been pressing countries to sign the Global Methane Pledge to cut emissions. E.U. officials estimate rapid reductions in methane could trim 0.3 degrees Celsius from overall global temperature rise by 2030.

But some of the largest methane emitters still haven’t signed the pledge, including Russia and China.

“You’re not going to have everybody join,” said Steve Hamburg, chief scientist at the Environmental Defense Fund. “The fact that there’s now a large proportion of the global community signing on, that’s the real key.”

“The pledge to cut methane is the single biggest and fastest bite out of today’s warming,” Durwood Zaelke, president of the Institute for Governance and Sustainable Development, said in a statement.

The EPA announcement Tuesday reflects the Biden administration’s strategy to achieve near-term reductions in greenhouse gas emissions while convincing other nations that America can deliver on its ambitious climate goals.

“We need to lean in and set a very aggressive standard so that the industry understands what the rules of engagement are and what the expectations are,” EPA Administrator Michael Regan said in an interview last month.

“Methane is such a potent pollutant. It’s important that we understand what the contribution is from this industry, that it is monitored more effectively and that we get the deep methane emission reductions that we know we need in order to meet the president’s agenda,” he added.

The EPA is set to require most oil and gas operators to use special cameras or other instruments four times a year to spot and plug leaks of the invisible gas from compressor stations, as well as sites the agency suspects are leaking more than three tons of methane annually. Drillers in Alaska’s North Slope region will be subject to a more permissive monitoring schedule and other requirements to account for extreme weather.

The agency will also require new and existing pneumatic controllers to have zero emissions. Those devices, used to control valves at oil and gas sites, are a leading source of methane emissions in the sector. Yet sales of zero-emission controllers have been slow, one industry executive said on condition of anonymity, because oil field operators want to keep costs down and prefer to wait until the device is broken to replace it.

The EPA is also set to restrict the venting of natural gas found in oil wells, known as associated gas, requiring operators to route the gas to a pipeline when possible.

For the first time, older oil and gas wells, which are most prone to leaks, will have to curb methane. The new proposal will require states to develop their own methane rules for existing wells that are in line with federal guidelines, while the EPA will regulate all new wells.

“There is a general sense that at least when it comes to the oil and gas sector, a lot of the technologies and tools are available, so it is possible to cost effectively reduce methane,” said Jeffrey Berman, director of energy transition analysis at the Rapidan Energy Group. “You can cost effectively do a lot of the things that are required.”

Separately, the Pipeline and Hazardous Materials Safety Administration’s new rule will require oil and gas companies to report problems with pipelines carrying gas from wells to a centralized sites.

When one of these pipes ruptures, it releases more than 1,000 metric tons of methane on average and can be deadly. The explosion in 2018 of a corroded 10-inch gas gathering line in Midland, Texas, killed a 3-year-old girl and badly burned members of her family.

“After years in development, these new regulations represent a major step to enhance and modernize pipeline safety and environmental standards,” Transportation Secretary Pete Buttigieg said in a statement. “This rule will improve safety, reduce greenhouse gas emissions, and result in more jobs for pipeline workers that are needed to help upgrade the safety and operations of these lines.”

The EPA proposal alone is estimated to reduce methane emissions by about 41 million tons through 2035 - an amount equal to taking more than 200 million passenger cars off the roads for a year. The agency plans to issue the final rule by the end of next year.

Plugging methane leaks is not just good for the health of Earth’s climate system. It also decreases the accumulation of toxic and smog-forming chemicals around oil drilling sites that makes the air difficult and dangerous to breathe. The EPA proposal would prevent the emission of 480,000 tons of toxic air pollutants through 2035.

For Sue Franklin, the rotten-egg stench of sulfur dioxide from wells less than a mile from her Permian Basin home in West Texas made falling asleep hard. “Smelling them all night long would cause horrific headaches,” she said.

Two years ago, she and her husband, Jim, had enough and moved about 28 miles away from the property on which they had intended to retire. But the effects linger for her, she said.

“I am getting older, so things were going to start going downhill for me anyway,” the 70-year-old said in a phone interview. “But I think that they rushed it along for me a little bit.”

Nearly 1,500 miles away in western Pennsylvania, Lois Bower-Bjornson stopped opening her windows in her home in Washington County after her teenage son, Gunnar, began getting severe nosebleeds. Urine tests revealed elevated levels of industrial chemicals in the family’s bodies.

Bower-Bjornson said she wants federal rules on leaks because she thinks the state government has failed to step up: No county in Pennsylvania has more drilling sites.

“We’re an energy-producing state,” she said. “So if I could wave a magic wand and this would all go away, that would be fabulous. But realistically, we know that’s not happening.”

Only a few states, including Colorado and New Mexico, have tried to regulate emissions from the oil and gas sector on their own. The EPA put forward a regulation aimed at stopping leaks from new oil and gas equipment less than a year before President Barack Obama left office, which the Trump administration rolled back.

Robert Kleinberg, a research scholar at Columbia University’s Center on Global Energy Policy, said past federal rules allowed industry to comply too easily, without restricting major sources of methane, such as unlit flares at oil and gas wells. Gas flaring, while wasteful, is designed to burn off methane before it escapes into the atmosphere.

“Things have changed a lot even in the 10 years since these rules were first written,” he said. “Yet EPA has just not kept up.”

The EPA’s proposal does not address some significant sources of methane emissions in the oil and gas sector, including abandoned wells and malfunctions in gas flaring. Officials said the agency plans to issue a supplemental proposal next year to address those issues.

“Our certified thermographers consistently uncover unlit flares that are venting massive amounts of methane into the atmosphere,” she said. “Any common-sense pollution standards would cover venting from all sources, including flares.”

Democratic lawmakers are trying to drive down methane even further by imposing a fee on excessive emissions. In recent days, the lawmakers inserted a plan to phase in payments for methane leaks above a certain threshold into Biden’s signature climate and social spending bill.

But much of the oil industry and some moderate Democrats oppose that plan. Aides to Sen. Joe Manchin, a Democrat who represents gas-producing West Virginia, declined to comment Monday on the new methane fee proposal.

“Really, it’s just a tax on natural gas, which is counterproductive,” said Macchiarola, the oil and gas lobbyist.