Here’s what is in the $1.75 trillion Biden budget plan 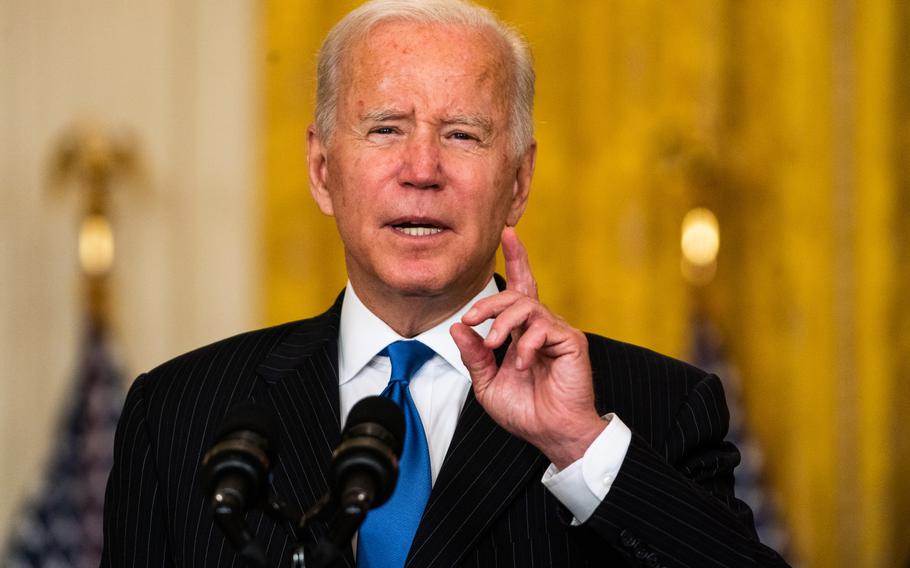 WASHINGTON — President Joe Biden on Thursday unveiled a roughly $1.75 trillion blueprint for overhauling the country's health care, climate, education and tax laws, as he seeks to break an ongoing logjam among his party's liberals and moderates that have stalled his economic agenda for months.

The plan includes some of Biden's earliest policy priorities, including new spending to enhance child care and offer prekindergarten free to all American families. But it also shelved some of Democrats' most fervent plans, including an effort to provide paid leave to millions of workers — one of many casualties in the party's efforts to reduce its original $3.5 trillion price tag.

Biden presented the plan on Capitol Hill in a private meeting with House Democrats earlier Thursday, after which many Democrats said they are still negotiating its specifics and haggling over what's in and out of the package. He still must convince lawmakers including Sens. Joe Manchin, D-W.Va., and Kyrsten Sinema, D-Ariz., who helped drive Democrats to scale back their policy ambitions in the first place.

What's in the plan for health care?

Senior administration officials characterized the plan's health-care elements as the biggest expansion of affordable care in a decade, predicting the changes would extend coverage to 7 million people. But the framework is far more modest than the goals that President Biden first proposed. In particular, senior administration officials said the president still wants Medicare to be able to negotiate lower drug prices but could not persuade enough congressional Democrats to support the idea.

— Extension until 2025 of expanded premium subsidies for more Americans who purchase health plans through Affordable Care Act marketplaces, as begun in the spring through the American Rescue Plan law.

— Allow until 2025 low-income people in a dozen states that have not expanded Medicaid to buy ACA health plans without paying a monthly premium.

— Expansion of Medicare benefits for older Americans to include hearing benefits.

What's in the plan for families?

Some of the most ambitious and expensive plans put forward by the Biden administration seek to ease the financial burdens facing millions of American families, particularly low-income parents with children. The White House described the investments as the most transformative targeting caregiving in "generations," pointing to a slew of new programs and tax credits that date back to some of Biden's earliest campaign promises.

— Universal, free prekindergarten for all 3- and 4-year-olds, which the White House has described as the largest expansion in such education programs since the creation of public high school roughly a century ago.

The prekindergarten effort is part of a broader $400 billion bucket of funds to help Americans afford child care, aiming to ensure families who earn less than $300,000 annually pay no more than 7% of their income on child care for kids under age 6.

— Roughly $150 billion for home care to help seniors in need.

— A one-year extension of expanded, refundable child tax credits, which would continue to be paid out on a monthly basis, continuing a pandemic-era relief program.

— New higher-education aid, including an increase to the maximum Pell Grant by $550 for roughly 5 million students in need, and additional investments to boost Historically Black Colleges and Universities.

What's in the plan for climate?

The Biden administration aims to secure $555 billion in spending to address climate change, an amount the White House says makes the bill the biggest clean energy investment in the nation's history.

The bulk of the clean energy measures come in the form of tax breaks for companies and consumers that install solar panels, improve the energy efficiency of buildings, and purchase electric vehicles. The EV tax credit in particular could lower the cost of such a vehicle by $12,500 for a middle-class family, according to the administration.

— Additional financial incentives for making the wind turbines and other clean energy equipment domestically and in union-organized factories.

— A new Civilian Climate Corps to hire perhaps 300,000 young people to restore forests and wetlands and guard against the effects of rising temperatures.

What's in the plan for taxes?

Senior administration officials insist the $1.75 trillion plan is financed in full, raising nearly $2 trillion over 10 years. Initially, the White House had hoped to raise even more money by ratcheting up rates on corporations and wealthy Americans, a move that would have unwound the tax cuts imposed under now-former President Trump in 2017. But Biden had to abandon that plan in the face of opposition from Sinema, who opposed tax increases. In the end, they say their plan preserves Biden's commitment not to raise taxes on Americans making under $400,000 annually. Among the most critical revenue raisers:

— A new 15% corporate minimum tax on large corporations, part of a broader effort on the part of the White House and Democrats to address the fact some companies reduce their tax burdens to zero.

— A new tax surcharge targeting the wealthiest Americans. The proposal would impose a new 5% rate on those with incomes above $10 million and an additional 3% surtax on incomes above $25 million.

— Roughly $400 billion to empower the Internal Revenue Service to pursue tax cheats, with a focus on Americans at higher incomes.

What was left out of the package?

Trimming a package to $1.75 trillion from its original $3.5 trillion size forced Biden to make considerable trade-offs, including on some of Democrats' signature policy goals. Manchin and Sinema had raised concerns about advancing a large package, and without their support, Democrats would not have been able to advance a package at all.

By Thursday morning, Democrats insisted that many of the eliminated provisions remain on the table. For now, though, here is what has been removed:

— Prescription drug pricing reform: Democrats had hoped to empower Medicare to negotiate lower prices for seniors, one of the party's most important campaign promises. But resistance from moderates — and overwhelming lobbying from the drug industry — prompted lawmakers to leave out a measure that would have also raised new money.

— A fulsome Medicare expansion: The chief advocate for the idea, Sen. Bernie Sanders, I-Vt., initially had hoped to expand Medicare to cover dental, vision and hearing. In the end, he only achieved hearing, amid opposition from Manchin.

— Paid family leave: Even Biden had stressed during the 2020 race that he hoped to address a long-known deficiency in the U.S. safety net, which leaves millions of Americans without paid family or medical leave. Democrats had proposed 12 weeks of benefits, then scaled it down to 4 weeks to the chagrin of some members — before dropping it entirely due to Manchin.

— Clean energy: Many of the aggressive steps Biden and other Democrats hoped to take to further cut emissions, including a comprehensive program to reward electric utilities for switching to renewable energy, have fallen out of the plan due to opposition from Manchin, who represents a coal heavy state. The legislation alone is unlikely to allow the country to meet Biden's goal of cutting greenhouse gas emissions in half below 2005 levels by the end of the decade.

— A billionaires tax: In the late stages of talks, Sinema and Sen. Elizabeth Warren, D-Mass., emerged with a new idea: A plan to tax roughly 700 of the wealthiest Americans, including the likes of Amazon founder Jeff Bezos (who owns The Washington Post) and Tesla CEO Elon Musk. But they ultimately dropped the idea, a riff on Warren's earlier wealth tax proposal, amid opposition from Democrats about its feasibility. A broader effort to raise taxes on wealthy Americans and corporations, unwinding the tax cuts under former president Donald Trump, had been jettisoned.