President Biden honors Tree of Life victims, calls on those left behind to ‘turn pain into purpose’ 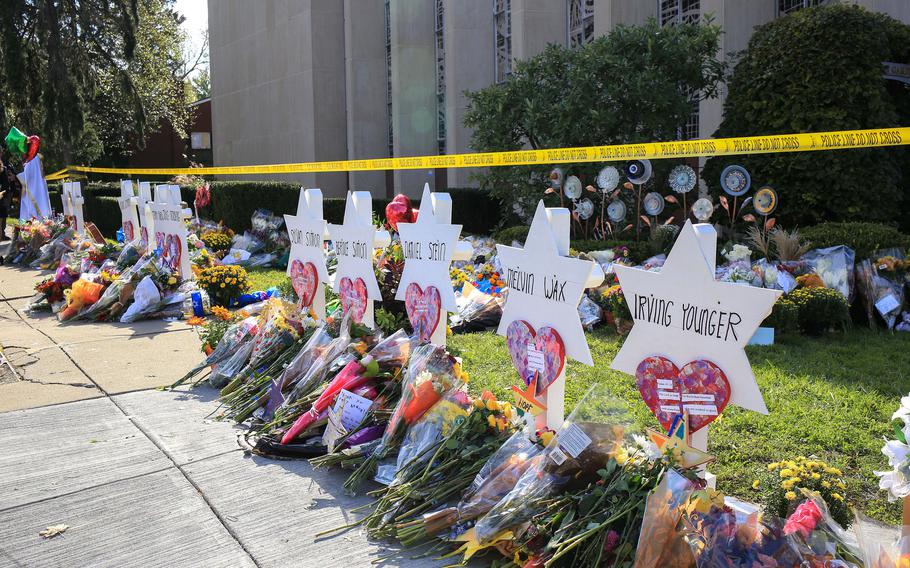 The Tree of Life synagogue at the intersection of Shady and Wilkins Avenue, in Pittsburgh’s Squirrel Hill neighborhood, on Oct. 30, 2018. (John Altdorfer/Zuma Press/TNS)

PITTSBURGH (Tribune News Service)— Marking the three-year anniversary of the mass shooting at Tree of Life synagogue on Oct. 27, 2018, that killed 11 worshippers and is believed to be the deadliest attack against Jews in American history, President Joe Biden said the day and its aftermath “remind all of us to embrace the better angels of our nature,” to “turn pain into purpose” and to stand up against antisemitism with “clarity and conviction.”

In a statement Wednesday, Biden recalled the morning a gunman attacked the synagogue — what was supposed to be a “peaceful Shabbat morning” — and “stole the lives of 11 souls in prayer.”

Eleven others, the president added, managed to escape — “some with serious physical injuries, others with indelible scars of grief.”

“The attack was the deadliest act of antisemitism in our nation’s history,” Biden said. “It was an assault on members of the Tree of Life, New Light, and Dor Hadash congregations, the American Jewish community, and our country. And it was a reminder that hate never goes away, it only hides; and if we give hate oxygen, it can consume.”

But in the days, weeks and months after the attack, the “unyielding character of a community” was revealed, Biden said. He cited “the first responders who rushed into harm’s way. The teenagers who organized a Havdalah vigil for a neighborhood in need. The art teacher who painted hearts and Stars of David in the windows of a local coffee shop. The designer who formed an iconic image that defined a city and inspired a nation with three simple words: stronger than hate.”

“That day and those that followed remind all of us to embrace the better angels of our nature — and to turn pain into purpose,” Biden continued. “We must always stand up and speak out against antisemitism with clarity and conviction, and rally against the forces of hate in all its forms, because silence is complicity. We must recognize in others our shared humanity and strive to summon unexpected faith in unanticipated moments — in the hope that we might heal and rebuild.”

Biden said that continues to be the work of his administration and that it’s taken shape as “laying out our country’s first-ever comprehensive strategy to address domestic terrorism, signing legislation aimed at strengthening our efforts to counter unlawful acts of hate, taking executive actions to protect houses of worship, and pressing forward with executive and legislative action to reduce all forms of gun violence.”

“This Shabbat, in synagogues around the country, worshipers will sing the timeless words from the Book of Proverbs: Eitz Chayim Hee La’machazikim Bah. ‘It is a tree of life for those who hold fast to it,’” Biden said. “As we mark three years since this heinous attack, we resolve to remember the lives lost and commit to protecting a future worthy of their memories.

“May the survivors and the families of the victims hold fast to the teachings of their faith and find comfort in the embrace of their community and their country.” ——— ©2021 PG Publishing Co.