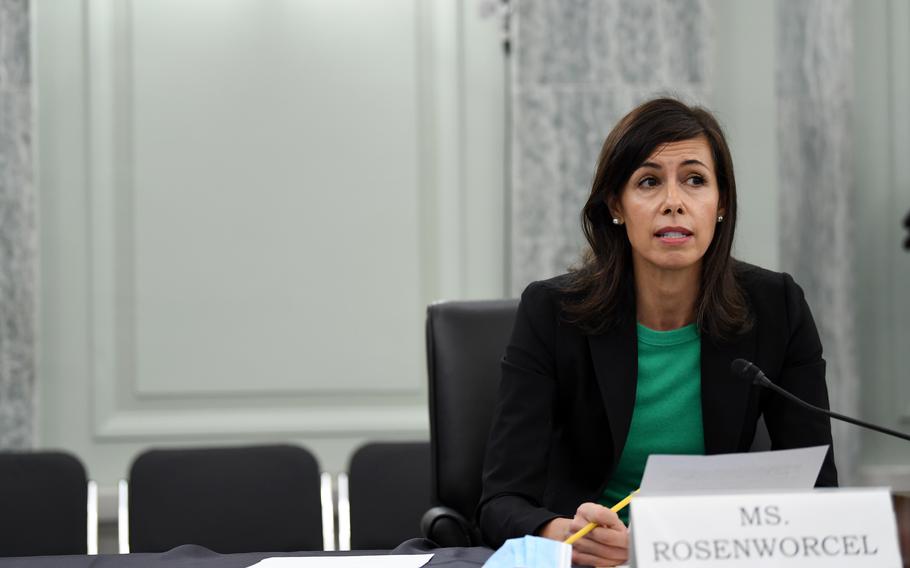 If confirmed, Rosenworcel, the FCC’s acting chairwoman, would become the first woman to lead the agency. Sohn, a former FCC official, is a net neutrality advocate. (Jonathan Newton, The Washington Post/AP)

WASHINGTON - The White House on Tuesday named Jessica Rosenworcel and Gigi Sohn to top Federal Communications Commission positions in a late bid to stave off a Republican majority over the regulator.

If confirmed, Rosenworcel, the FCC’s acting chairwoman, would become the first woman to lead the agency. Sohn, a former FCC official, is a net neutrality advocate.

The FCC has been stymied by vacancies under President Joe Biden’s tenure, as the White House contends with a raging public health crisis, supply chain collapse and a torrent of severe weather disasters. Unless both candidates are approved by the Senate before the end of the year, Rosenworcel’s term will expire and Republicans will claim a majority in January.

Rosenworcel, who had been widely favored to be Biden’s pick, faces a tangled policy landscape that influences how Americans learn, work, shop and communicate. As acting chair, Rosenworcel has tackled robocalls and championed efforts to close the “homework gap,” including $3.2 billion for emergency broadband benefits to help millions of students who lack access, according to the FCC.

While regulators have long cast Internet access as a luxury, the pandemic has crystallized how essential the Web is to modern life. It has illuminated the gulf between those who can seamlessly migrate their lives online and those who must rely on free broadband signals in malls, coffee shops and darkened parking lots. Research has demonstrated that Internet access is tethered to jobs and economic growth.

The FCC’s most recent broadband progress report found that at least 18 million Americans lack fast, reliable Internet access; experts believe the real figure is much higher. The agency has played some role in exacerbating that gap: a faulty FCC map has made scores of households lacking Internet access “invisible” to regulators, Microsoft warned in 2019.

Rosenworcel emphasized her commitment to expanding broadband access to Americans in a statement on Tuesday.

“It is an honor to work with my colleagues on the Commission and the agency’s talented staff to ensure that no matter who you are or where you live, everyone has the connections they need to live, work, and learn in the digital age,” she said.

Both nominees would be vital to Democrats push to revive net neutrality, the latest sally in a decades-long battle over whether all Internet traffic should be treated equally by providers. The fight has been marked by an endless ping-pong of court challenges and captured national attention, spurring millions of Americans to directly plead with the FCC to preserve its own rules before the agency voted to repeal them under President Donald Trump in 2017.

Now, in a moment that has emphasized how indispensable Internet access is for all Americans, Democrats are aiming to resurrect one of their signature tech policy priorities. In June, Biden signed an executive order promoting competition in the economy, setting the table for the FCC to readopt net neutrality provisions and pursue a “broadband nutrition label” that allows consumers to examine the details associated with their broadband packages, from data allowances to prices.

Andrew Jay Schwartzman, a colleague of Sohn’s who also advocates for net neutrality, said if confirmed, the nominees will allow the FCC to move forward with initiatives that have been sidelined while the commission was deadlocked 2-to-2.

“Chair Jessica Rosenworcel and Commissioners Geoffrey Starks and Gigi Sohn will create an FCC ‘dream team’ that can implement a progressive telecommunications policy agenda for the coming decades,” Schwartzman, senior counselor at the Benton Institute for Broadband & Society, said in a statement.

Sohn would also be the first openly LGBTQ commissioner in the history of the FCC, which Schwartzman said could help the FCC “reflect the often overlooked needs” of the community.

The advocacy group Free Press urged Congress to swiftly confirm the nominees so that the agency could advance Democrats’ telecom priorities.

“While these choices were worth the wait, there’s no time to waste and so much to get done: ensuring the billions being invested in broadband actually reach those who need it most, restoring Net Neutrality and Title II, reckoning with media regulators’ history on race and repairing the damage of the Trump years,” Free Press president and co-CEO Craig Aaron said in a statement.

Republicans have historically grated against efforts to regulate broadband like a utility, siding with telecom giants including AT&T, Comcast and Verizon that say they believe in the principles of Internet openness - but oppose stiff federal rules to enforce them.

The White House also announced the nomination of Alan Davidson as assistant secretary for communications and information at the National Telecommunications and Information Administration, which is responsible for advising the president on telecom policy issues. Davidson is a tech industry veteran who currently serves as a senior adviser at the Mozilla Foundation, a nonprofit that promotes open Internet values. He previously started Google’s public policy office in Washington.