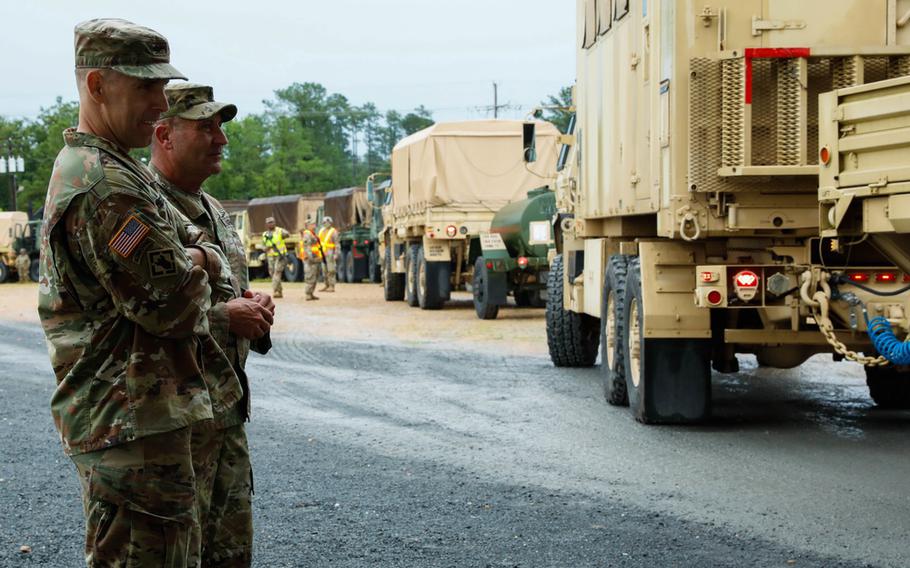 The Guard deployed all of its soldiers and airmen — about 5,200 combined — to respond to communities throughout southeast Louisiana devastated by the Category 4 hurricane, which made landfall Aug. 29 at Port Fourchon. (Maddie Fortune/Army National Guard)

The Guard deployed all of its soldiers and airmen — about 5,200 combined — to respond to communities throughout southeast Louisiana devastated by the Category 4 hurricane, which made landfall Aug. 29 at Port Fourchon.

In addition, more than 3,500 Guardsmen from 16 states and Puerto Rico joined in the response and recovery work, along with more than 400 active duty and Army reserve service members, officials said Friday.

“I want to personally thank all of you, the men and women of the Louisiana National Guard, for your service to our citizens in the aftermath of Hurricane Ida,” Louisiana Gov. John Bel Edwards said in a news release Friday. “You are critical to our response and recovery missions.”

In Terrebonne and Lafourche, the Guard helped distribute food and water, provided transportation and engineering and assisted with security.

For much of September, Terrebonne General Health System and the Louisiana Army National Guard operated a medical unit of tents and other temporary facilities outside the hospital, which was severely damaged by Ida. There, doctors could stabilize emergency patients until they could be transported by ambulance to other hospitals.

In Grand Isle, the Guard’s 225th Engineer Brigade filled breaches in the island’s levee with about 1,500 3-by-3-foot sacks filled with up to 4,000 pounds of sand each. The temporary fix is meant to buy the people of Grand Isle more time to repair their island until hurricane season ends Nov. 30.

Across southeast Louisiana, the Guard rescued 397 people and 65 pets and distributed more than 6.7 million meals, 7.9 million liters of water, 1.3 million bags of ice and 310,245 roof tarps. A floating bridge built by the Guard assisted in the crossing of 30,710 vehicles. Engineers placed 1,689 giant sand sacks to fight flooding, assessed 5,314 miles of roadway and cleared 2,946 miles of road in 20 parishes.

The Guard also worked with the Governor’s Office of Homeland Security and Emergency Preparedness to provide areas that lost power with 395 generators.

And the Guard started early last year administering COVID-19 tests across the state, work that continues.