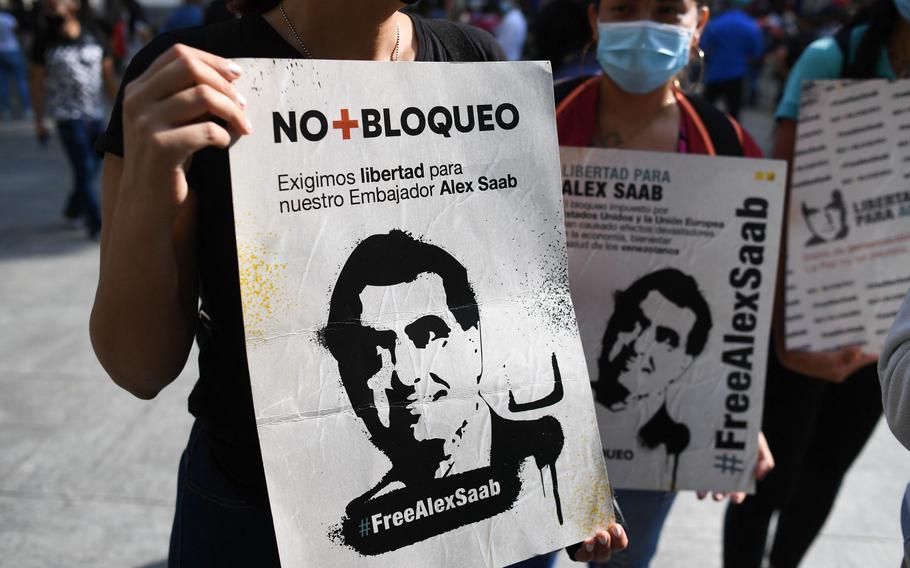 People hold signs with the image of Colombian businessman Alex Saab, who was extradited to the U.S., during a demonstration demanding his release, at the Bolivar square in Caracas, on Oct. 17, 2021. (Federico Parra/AFP/Getty Images/TNS)

MIAMI (Tribune News Service)— After a slowdown during the coronavirus pandemic, federal authorities in South Florida are accelerating their crackdown on foreign corruption in Venezuela’s government and the diversion of hundreds of millions of dollars into the U.S. banking system.

The latest target: Colombian businessman Alvaro Pulido Vargas, who has been charged in two massive money-laundering conspiracy cases accusing him of bribing high-ranking Venezuelan officials in exchange for billions of dollars in food-, medicine- and housing-supply contracts that were supposed to help the country’s poor, according to federal prosecutors in Miami.

Pulido, 57, was charged Thursday as the lead defendant in a foreign corruption indictment involving Venezuela’s food- and medicine-distribution program. Pulido, along with other defendants in his case, is believed to be living in Colombia or Venezuela. He has not appeared in Miami federal court to face the new conspiracy charge.

Pulido is also a co-defendant with Colombian businessman Alex Saab in a separate 2019 indictment accusing them of paying kickbacks to Venezuelan officials to obtain inflated building-supply contracts for low-income housing projects. Saab, 49, who had been arrested last year in Cape Verde off the coast of Africa en route to Iran on a humanitarian mission for Venezuela, was extradited to Miami over the past weekend. Saab is close to Venezuelan President Nicolás Maduro, who mounted a campaign to block his prosecution in the United States.

Both Pulido and Saab, along with others — including Maduro’s three stepsons — were hit in 2019 with Treasury Department sanctions over the food-and-medicine supply contracts. But Pulido is the only one of the two Colombian businessmen to be charged in the parallel criminal case. The case, unsealed this week in Miami federal court, centers on a Venezuelan state-owned food-and-medicine distribution program, Comite Local de Abastecimiento y Produccion (CLAP).

“The corruption network that operates the CLAP program has allowed Maduro and his family members to steal from the Venezuelan people,” former Treasury Secretary Steven Mnuchin said in 2019. “They use food as a form of social control, to reward political supporters and punish opponents, all the while pocketing hundreds of millions of dollars through a number of fraudulent schemes.”

Two years later, Pulido is charged with four other defendants in the food-and-medicine corruption case, including Jose Gregorio Vielma-Mora, the former governor of the Venezuelan State of Tachira, who is accused of accepting bribes, and

Pulido’s son, Emmanuel Enrique Rubio Gonzalez, who collaborated with his father in obtaining the contracts and laundering the proceeds, according to the indictment.

Pulido led a “web” of businessmen and companies that obtained contracts with several Venezuelan government agencies to import $1.6 billion in boxes of food and medicine by paying bribes to senior officials, including Vielma-Mora, according to the indictment filed by Assistant U.S. Attorney Kurt Lunkenheimer.

“The defendants and their co-conspirators knowingly inflated the costs of the contracts to pay the bribes and unjustly enrich themselves,” the U.S. Attorney’s Office says in a news release.

The crux of the money laundering case: Co-conspirators working for Pulido in South Florida moved funds into and out of South Florida’s banking system to “promote the bribery scheme,” the release says.

Pulido and his co-conspirators, including some unnamed in the indictment, are accused of transferring about $180 million through the U.S. banking system to pay the government bribes and line their pockets.

All five defendants, including Pulido, are at large in the food-and-medicine corruption case. No defense attorneys are listed for them on the federal court docket.

Pulido is the latest suspect to be charged in connection with a series of corruption and money-laundering cases filed in the United States since 2017 that accuse dozens of current and former Venezuelan officials, business people and lawyers of stealing billions of dollars from Venezuela’s government and its state-run oil company, PDVSA. ———