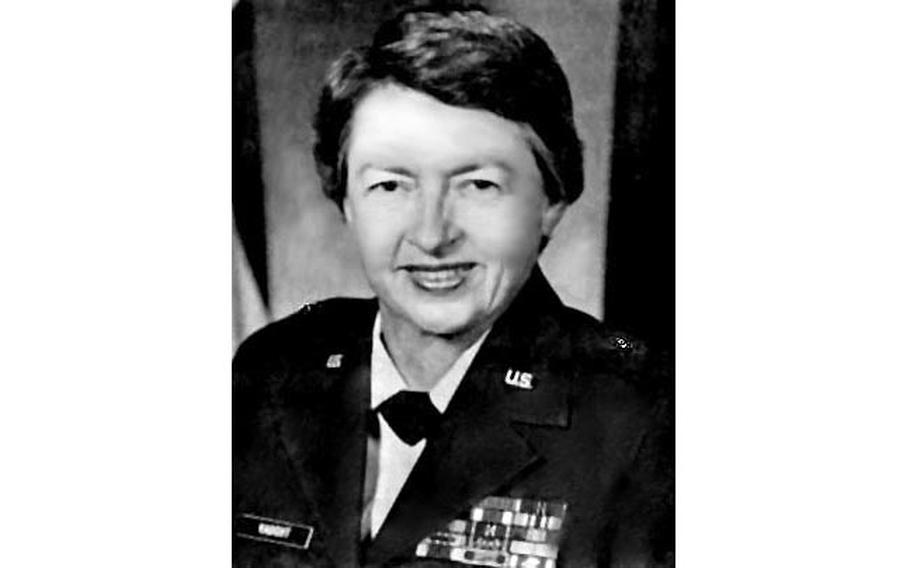 Brig. Gen. Wilma Vaught enlisted in the Air Force in 1957 and retired in 1985 after breaking multiple barriers for women in the armed forces. Vaught later led the creation of the national Military Women’s Memorial. (U.S. Air Force)

Sens. Tammy Duckworth, D-Ill., and Joni Ernst, R-Iowa, who both served in the military, sent a letter to Biden asking that he award the medal to Vaught at his first opportunity. Eighteen other senators signed onto the letter.

“For over 60 years, Brigadier General Vaught has served this nation both in uniform and as a staunch advocate and tireless voice for the women who have and are serving in America’s armed forces,” they wrote.

The Presidential Medal of Freedom is the highest civilian award in the United States and is bestowed by sitting presidents to recognize people who have made “an especially meritorious contribution to the security or national interests of the United States, world peace, cultural or other significant public or private endeavors.”

The senators argued the timing would be especially meaningful because this year marks the 80th anniversary of the legislation that created the Women’s Army Auxiliary Corps, which was the first formal path to military service for women.

Vaught, 91, served in the Air Force for 29 years. She enlisted in 1957 and “broke through the many bureaucratic and gender discriminating barriers that military women faced,” the senators wrote.

According to her citation for her entry into the National Women’s Hall of Fame, Vaught in 1966 became the first woman to deploy with a strategic air command bombardment wing. In 1972, she was the first female Air Force officer to attend the Industrial College of the Armed Forces and, in 1980, she became the first woman promoted to brigadier general in the comptroller career field.

She served in Europe, Vietnam and at various posts throughout the United States. She once served as the chairwoman of the NATO Women in Allied Forces Committee and she was the first woman to command a unit that received the Joint Meritorious Unit Award.

After retiring in 1985, Vaught fought for the creation of a national memorial honoring military women.

She helped establish the Women in Military Service for America Memorial Foundation, Inc., and raised more than $45 million to help establish the Military Women’s Memorial, a 33,000-square-foot memorial and education center located at the entrance to Arlington National Cemetery. The memorial opened in 1997.

“Throughout her life, Brigadier General Wilma Vaught has led the way, forging new paths and opportunities for other women to succeed with a career in America’s military services,” the senators wrote to Biden. “From her commissioning in 1957 to the combined 34 years she has served as president and president emeritus of the Women in Military Service to America Foundation, Brigadier General Vaught remains a pioneer.”