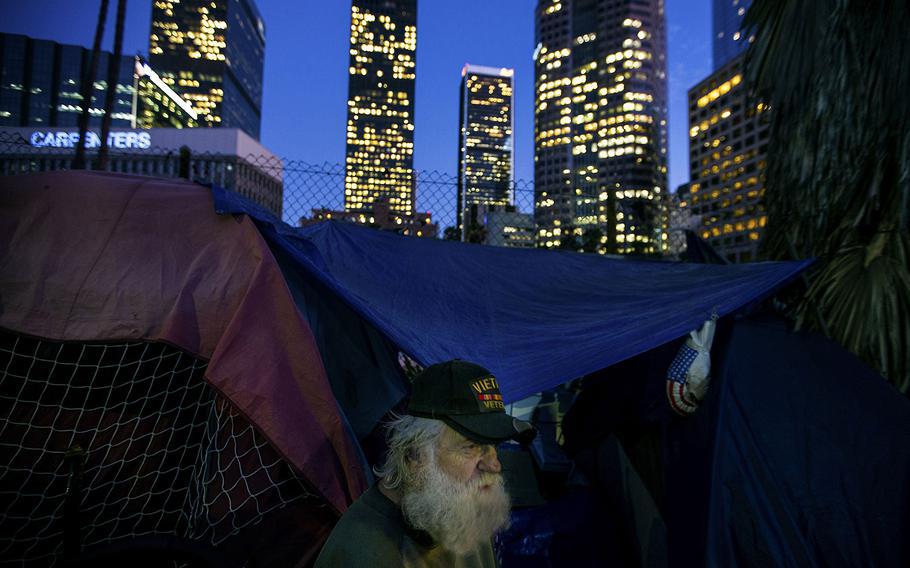 In a 2017 photo, a Vietnam War veteran is shown in his tent on South Beaudry Avenue in Los Angeles. (Francine Orr, Los Angeles Times/TNS)

WASHINGTON – Department of Veterans Affairs Secretary Denis McDonough vowed Wednesday to get all homeless veterans living in the area known as “veterans row” in Los Angeles into housing by Nov. 1.

About 40 people live along veterans row, a homeless encampment just outside the West Los Angeles VA Medical Center. McDonough visited the facility two weeks ago and spoke to veterans living there.

“I think this is a question of rolling up our sleeves and getting to work and getting it done,” he said. “That’s what I pledged to the veterans I spoke with on veterans row that day and what the country expects us to do.”

The VA assigned a social worker and an employee who specializes in homelessness resources to speak with the veterans and help get them into housing, McDonough said. The goal is to find them temporary housing by November – less than two weeks away.

When McDonough was asked why the resources weren’t previously expended toward veterans row, he said: “I can’t comment as to why it didn’t happen before.”

Veterans experience homelessness at a disproportionately high rate compared to the rest of the U.S. population, and there are more homeless veterans in Los Angeles County than anywhere else in the country.

According to the Department of Housing and Urban Development, 37,252 veterans were experiencing homelessness in January 2020. Of those veterans, 3,681, or about 10%, lived in Los Angeles.

Veteran homelessness increased slightly from 2019, stoking concerns among advocates that the effects of the coronavirus pandemic could add to an already regressive trend. Veteran homelessness increased in 19 states and Washington, D.C., between 2019 and 2020, with the biggest increases in California, Nevada and Delaware. California accounted for 31% of all homeless veterans in the country.

In addition to the goal of eliminating the veterans row encampment by November, McDonough announced Wednesday that the VA would house another 500 homeless veterans in Los Angeles by the end of 2021.

“What the secretary is announcing today is ambitious, but the exact kind of leadership needed to get folks in homes,” said Rep. Karen Bass, D-Calif. “Addressing this crisis cannot wait.”

Earlier this year, McDonough promised he would renew the department’s focus on a major project to house homeless veterans in Los Angeles. For about five years, the VA has been working on a plan to build 1,200 subsidized apartments for homeless veterans on the campus of the West Los Angeles VA hospital. As of June, only 54 units had been finished.

McDonough vowed during the summer to give his approval on a master plan for the project by the end of the year. A new draft plan was posted to the Federal Register on Monday. Members of the public have until Dec. 17 to provide feedback on the plan, which is more than 200 pages.

The plan states 800 units are expected to be under development at the campus by 2023. The full plan can be viewed at westladraftmasterplan.org.