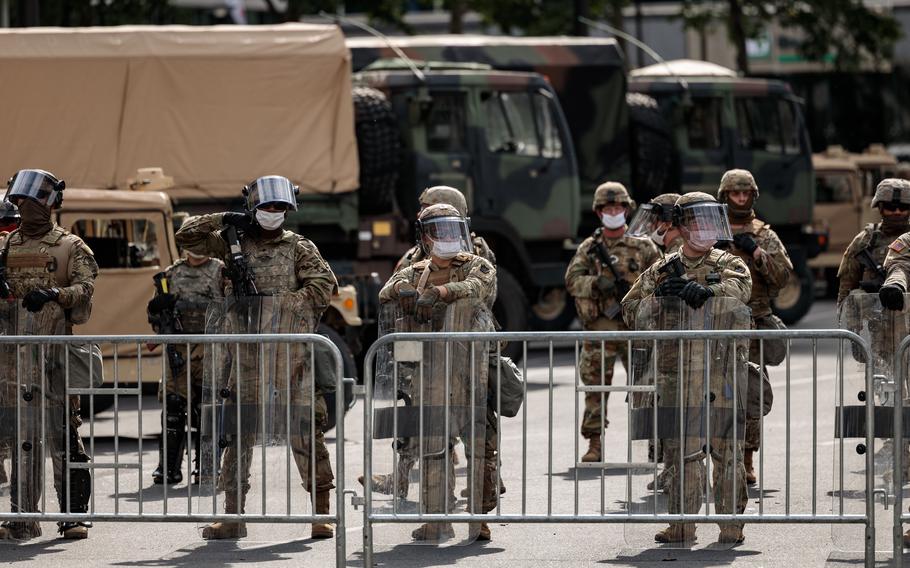 The National Guard in Philadelphia on June 2, 2020 during protests. A day after five shootings claimed the lives of two men and injured seven people, the founder of two anticrime community organizations called on Philadelphia officials to request that the National Guard be dispatched to the city. (Robert Bulmahn/Wikimedia Commons)

The Army National Guard’s top general said Wednesday that he would not lobby to expand the size of the increasingly busy force, but if top Army officials proposed adding new troops he “would accept that mission immediately.”

“I don't advocate for growing the Army Guard because I'm part of the Army team, and I understand the budget constraints that we have inside the Army right now,” Lt. Gen. Jon Jensen told an audience at the Center for Strategic and International Studies, a Washington think tank. “But, if [Army] Secretary [Christine Wormuth] and Chief [of Staff Gen. James McConville] felt they needed some more capability in the Reserve component, yes, I’d accept that.”

The Army National Guard makes up about two-thirds of the total National Guard force, with more than 337,000 soldiers as of Sept. 30, according to the Army. The rest of the National Guard’s about 108,000 troops serve in the Air Force National Guard. Jensen said Wednesday that he could envision growing the Army Guard to about 350,000 troops in several years. He said the added soldiers could help considering the incredible demand placed on Guard troops during the last two years.

Since March 2020, National Guard troops have set records for the number of missions that they have been called to support — including coronavirus-related missions, riot control during the summer 2020 demonstrations against racism, border operations along the southwest U.S., and relief efforts for natural disasters including hurricanes and wildfires. Guard members logged a record 8.4 million duty days in 2020, and they set a record that June with more than 120,000 on duty across the world, including supporting operations in combat zones, officials said.

Given the unprecedented demand for the National Guard, dozens of lawmakers have called for boosting the size of the Guard in their home states and the overall force size. Among those advocating for a larger force were lawmakers from the nation’s three most populous states. In advocating earlier this year to grow the Guard, the lawmakers in a bipartisan letter to Defense Secretary Lloyd Austin pointed to the increase in hurricanes in Florida, flooding in Texas and wildfires in California, in addition to other operations in recent years to which Guard forces have responded.

Army officials, including Jensen, have acknowledged the pace of operations for the National Guard since March 2020 has been hard on troops and their families and difficult for some employers who have hired Guard members for civilian jobs.

“It’s obviously a very stressful period of time for our whole country, not just our Guardsmen,” Jensen said. “And then, for the National Guard, it’s been a stressful time -- dealing with a pandemic, lots of other things, and economic uncertainty in many cases. But, the National Guard — our soldiers and airmen, you know, they have responded remarkably.”

Jensen has led the Army National Guard since August 2020 after previously serving as the Minnesota National Guard’s adjutant general. His predecessor as the Army Guard’s top general, Gen. Daniel Hokanson, is now the general in charge of the entire National Guard and a member of the Joint Chiefs of Staff. Earlier this year, he said he backed boosting the size of the Guard, given the increasing demands on the force.

But, the size of the force is a decision for Congress, which sets the end strength for each service and their components each year in the must-pass National Defense Authorization Act, which sets Pentagon spending and policy priorities. Congress has yet to pass an NDAA for fiscal 2022, which started Oct. 1. The Pentagon is operating under a continuing resolution, which funds operations at fiscal 2021 amounts.

Jensen said he expected Guard forces would remain in demand for the foreseeable future. Despite the domestic operations Army Guard forces have been supporting, he said they must still prepare for war.

By preparing for major combat operations, the general said, Guard members learn the skills that they need no matter what mission they are asked to accomplish, even in the United States.

“Our role domestically is a very important mission task which we take very, very seriously,” Jensen said. “Do we think that that those requirements are going to increase over the course of time? We’re not really sure yet, but we’re committed to being prepared and being ready for those missions.

“We believe that the best way to be ready and prepared for those missions is by preparing for the most complex mission — our go-to-war mission. And, that allows us to be incredibly adaptable here domestically.”