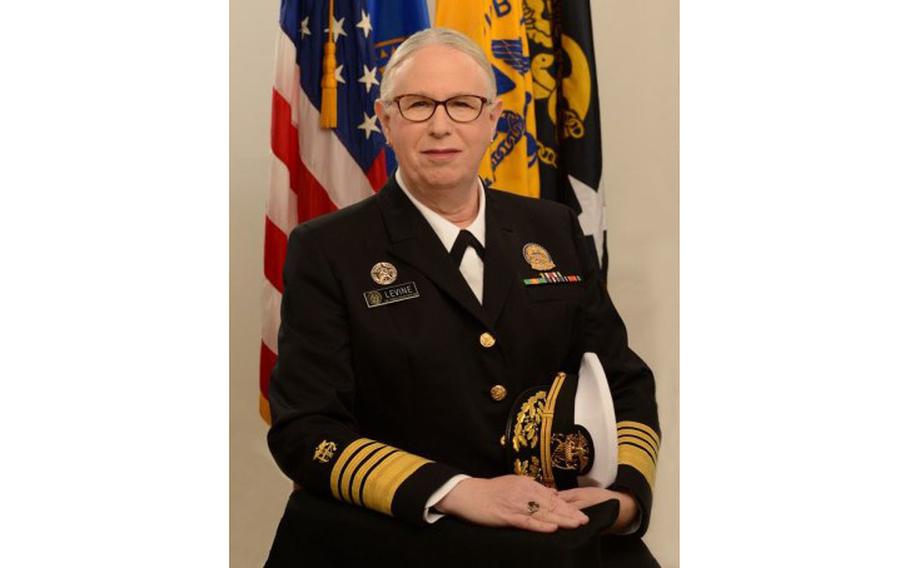 Rachel Levine, the U.S. assistant secretary for health, was sworn in Tuesday as an admiral of the U.S. Public Health Service Commissioned Corps, a 6,000-person force that responds to health crises on behalf of the federal government, including administering coronavirus vaccines and delivering care after hurricanes. Levine is also the organization’s first-ever female four-star admiral.

The move was hailed by advocacy groups like the gay rights organization GLAAD, and health care leaders who called it a breakthrough moment.

The group representing public health officials “is here to support you and your team defend the health of all Americans!” Michael Fraser, CEO of the Association of State and Territorial Health Officials, wrote on Twitter.

In an interview, Levine stressed that her new position as an admiral was “not just symbolic,” and that she would take a leadership role in shaping the public health corps’ priorities. “I’m doing this because of my dedication to service . . . [and] with the utmost respect and honor for the uniform that I will be wearing,” Levine said, adding she would begin wearing the group’s blue uniform immediately.

The public health service is one of the nation’s eight uniformed services, although it is distinct from the six military services — including the Navy, Army and Air Force — by explicitly focusing on medical issues. The National Oceanic and Atmospheric Administration Commissioned Officer Corps, whose officers command vehicles that probe hurricanes and map the seafloor, is also a uniformed service.

The 63-year-old Levine, who was previously Pennsylvania’s health secretary and had not served in the commissioned corps, is now set to take a more prominent role in the service’s operations. She will be the sixth four-star admiral in the corps’ history, according to the Department of Health and Human Services.

Political appointees are regularly tapped for senior roles in the corps. Brett Giroir, Levine’s predecessor during the Trump administration, was sworn in as an admiral after his 2018 Senate confirmation. Vivek H. Murthy, the nation’s surgeon general, also serves as a vice admiral.

The long-running health corps traces its history to 1798, but the service was formally established by Congress in 1889. The oft-overlooked corps has struggled with retirements and visibility; it was slow to get access to its own supply of coronavirus vaccines, even as its officers helped deliver shots around the nation.

Administration officials touted the significance of Levine’s elevation to admiral, praising President Joe Biden’s commitment to diversity and noting that the ceremony will occur during LGBTQ history month.

“Admiral Levine’s historic appointment as the first openly transgender four-star officer is a giant step forward toward equality as a nation,” HHS Secretary Xavier Becerra said in a statement.

Levine has been repeatedly targeted by conservative advocacy groups and politicians, who claimed her historic selection — as the first openly transgender official ever confirmed by the Senate — was a political gesture by Biden. At Levine’s confirmation hearing to serve as assistant secretary for health, Sen. Rand Paul, R-Ky., tried to draw a connection between genital mutilation and transition-related care, which prompted stern rebukes from Paul’s Democratic colleagues.

But Levine shrugged off questions about a similar backlash to Tuesday’s announcement, even as her appointment became a leading topic on conservative talk radio and social media on Tuesday. “I am not worried,” she said. “I’m such a strong proponent of diversity, equity and inclusion ...and we have a president that is such a strong advocate of diversity, equity and inclusion as well.”