Are Americans growing warier of more government just as Biden tries to pass his agenda? WASHINGTON — A year ago, as Americans were casting their votes for president, the effects of the coronavirus pandemic had shifted attitudes toward greater support for a more robust role for government. Many Democrats believed that could be a long-lasting effect and President Joe Biden built his domestic agenda in part around the idea that Americans were ready for big and bold.

Global pandemics have a history of changing the shape of societies. Working from home is one example. A warming toward government and its role in helping to alleviate the pandemic's shocks to the well-being of families and businesses appeared to be another. Today there is some evidence that the public's appetite for more and bigger government, at least in the abstract, is not what it was last year.

The evidence comes from new polling from the Gallup organization, which produces an annual survey of attitudes about government, governance and politics. In last year's survey, 54% of Americans said government should do more to solve the country's problems. In the latest round, conducted during the first half of September, 52% said government is trying to do too many things that are better left to businesses and individuals.

The current findings are a reversion to the norm. Over that past 29 years of Gallup's trend on this question, there was only one other time when half the country favored a more active role for government. That came in the immediate aftermath of the attacks of Sept. 11, 2001, when the desire for more government was focused on security issues and defending the country from foreign terrorists, rather than on whether to spend more to deal with health and economic issues. Other than that moment and last year, Americans have been wary of too much government.

That reality confronts Biden and his party as they press ahead to pass both a bipartisan infrastructure package and a Democrats-only package of social initiatives and climate programs. Like former Democratic presidents Bill Clinton and Barack Obama, Biden faces the twin challenges of asking voters to support more government while also trying to persuade the public that government is capable of doing what these presidents said was needed.

Republicans have uniformly stood against more government and Democrats have been its champions, which adds to the dilemma for Biden. As the intraparty debate in Congress over what was initially a $3.5 trillion spending package shows, there is a perceived political necessity to do as much as possible so as not to disappoint his party's activist core. Democrats will need motivated voters in next year's midterm election (and in the Virginia gubernatorial election in a few weeks).

Independents are a crucial part of the electorate that will help decide whether Democrats hold their majorities in the House and Senate in next year's midterm elections. They were instrumental in the gains Democrats made in 2018 and in Biden's election last year. If their current shift in attitude toward government translates into skepticism about the Biden agenda and leadership, Democrats could be in serious trouble next year. President Biden departs the West Wing to board Marine One on the South Lawn of the White House on Oct. 15 in Washington. (Demetrius Freeman/The Washington Post)

Gallup also underscored what has been a longstanding reality: the general distrust toward government. Trust in the government to handle international problems is at an all-time low, at 39%. As a cautionary note, this survey was done shortly after the chaotic withdrawal of U.S. forces from Afghanistan, which could have negatively affected the findings.

Trust in government to handle domestic issues was also at 39%, again perhaps a factor of the timing of the survey, which coincided with the surge in COVID cases from the delta variant and signs of higher inflation.

This is part of the backdrop as the president and Democratic leaders in Congress seek consensus on the big spending package. But it is not the entire picture, as administration officials and Democratic advocates of big and bold are quick to note.

Another part of that backdrop is evidence that major elements of both the spending and the revenue sides of the big package are broadly popular. That includes child tax credits, universal prekindergarten, expanded child care and family leave as well as higher taxes on corporations and the wealthiest taxpayers. The problem is that to date, the debate has focused on the price tag, not the pieces. 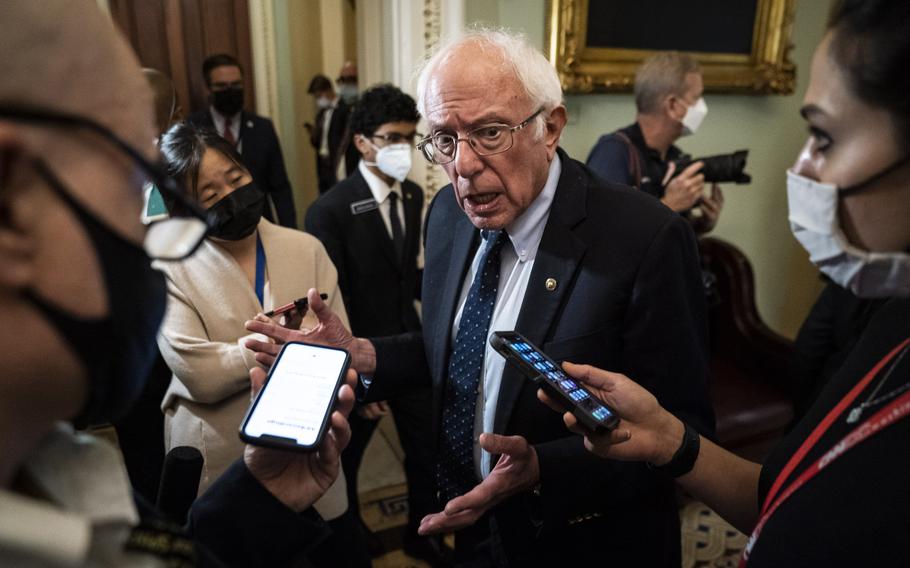 Biden, House Speaker Nancy Pelosi, D-Calif., and Senate Majority Leader Chuck Schumer, D-N.Y., haven't yet found consensus on the exact size or the individual pieces of the package to assure passage. Inside the administration there is a general sense of progress, the belief that, if many issues remain unresolved, all sides are now closer to agreement than they were a few weeks ago, when House progressives balked and forced Pelosi twice to delay a vote on a bipartisan infrastructure package.

That may be accurate but meanwhile the ongoing public debate continues to flare, as it did last week between Sens. Bernie Sanders, I-Vt., who is fighting to preserve as much of the $3.5 trillion as possible, and Joe Manchin, D-W.Va., who has said he favors something around $1.5 trillion. No one takes seriously that either Sanders or Manchin has drawn an uncrossable red line on the size of the package. Meanwhile, Sen. Kyrsten Sinema, D-Ariz., the other most prominent holdout next to Manchin, has signaled problems with some of the tax pieces in the package.

Ultimately everyone will have to give ground lest the Biden agenda end up collapsing near the finish line. Still, no one seems to know right now what the magic number will be nor is it clear just what the combination of programs will be. Democratic leaders have signaled growing urgency on the need to come together. At some point, it will be the president's call, in consultation with Pelosi and Schumer, to settle on something and persuade all sides to get behind it. He has shown patience or passivity, depending on the perspective, but the time for choosing is not far into the future.

Biden and his team built this agenda in the fall of 2020 and the earliest days of this year, at a point when the pandemic was raging and when unmet needs seemed to demand what has been described as a transformative set of programs. The needs are still there but after Biden sells his own party on the final shape of the package, he will then need to keep selling it to the public. Then he'll need to show that has delivered results they can feel and not just a number.