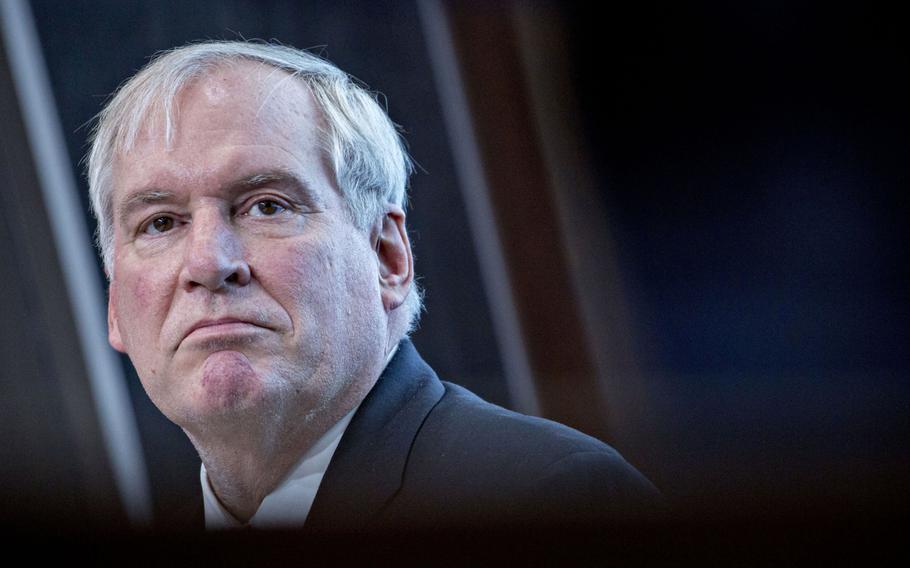 Eric Rosengren, then president and chief executive officer of the Federal Reserve Bank of Boston, at the Brookings Institution in Washington, D.C., on Jan. 8, 2018. (Andrew Harrer/Bloomberg)

The Federal Reserve's most embarrassing ethics scandal in years has cast a harsh spotlight on the world's most powerful central bank and the arm's-length governance of its 12 regional branches.

Their chiefs are among America's most influential public officials, helping to set borrowing costs for the $23 trillion economy.

But the process of picking them, and assessing their performance in office, has long been shielded from public scrutiny and accountability — something that's now drawing mounting criticism.

When Dallas Fed President Robert Kaplan stepped down last month in the wake of disclosures about his trading activity, his board of directors said his investing was in line with the rules and it lauded his contribution.

"No one is happy," the Fed chair told reporters days before news of the departure of Kaplan and Boston Fed chief Eric Rosengren, who retired citing ill health after his trading also drew scrutiny.

Powell ordered a system-wide review of ethics rules and has since asked the Fed inspector general to take a look at the trading of "certain senior officials."

The contrasting responses point to a question present since the Fed's creation: Who really governs its semi-autonomous regional branches?

"The notion of a quasi-public private institution that has a direct vote on monetary policy and such a low level of transparency undermines democratic accountability," said Brookings Institution senior fellow Sarah Binder.

She said the Fed needs a degree of transparency that matches its expanding footprint in the economy, which grew even more during the pandemic.

The search for new leaders in Dallas and Boston, which on Tuesday announced it has begun looking for a new president, may shift more influence in that process to Washington.

Democrats such as Sen. Robert Menendez of New Jersey are urging Powell to improve diversity among the Fed's leaders: regional presidents are currently almost all white and only three are women.

Republicans wrote to the boards of both reserve banks Tuesday, urging them to remain independent of partisan politics and pick candidates that adhere to the "narrow statutory mission" of the Fed without regard to political pressure.

The fight for sway over the central bank and its influential regional branches goes back more than a century and is as complicated as its peculiar public-private structure.

Created in 1913, the Fed system was a compromise. Banks wanted a reserve backstop after enduring a damaging run of financial crises. Populists were suspicious of Wall Street and President Woodrow Wilson wanted a supervisory board in Washington. The result was a network of a dozen regional banks — each with shareholders and directors — and a politically appointed seven-member Board of Governors.

"The Fed still lives with this original sin: it is not clear who the reserve banks are accountable to," said Kaleb Nygaard, a senior research associate at the Yale Program on Financial Stability. "It is something that has been an issue from the very beginning."

Reserve banks initially had significant autonomy, until legislation after the Great Depression concentrated power over monetary policy with the Washington Board.

Reserve banks are governed by regional directors, but who holds real governance power is opaque. There is no public vetting of Fed bank chiefs, unlike Washington Board members who are nominated by the U.S. president and confirmed by the Senate.

Search committees to select regional presidents are run by each board, but they don't produce a public report. Day-to-day governance and relationships between directors and presidents are hard to discern.

Bloomberg News in 2016 sought the annual evaluations of the 12 regional chiefs via Freedom of Information Act requests. The banks declined, with one citing court rulings that "performance evaluations are intensely personal and not subject to public disclosure."

The Boston Fed board chair through a spokesman declined to comment on whether there was an internal review of Rosegren's investment decisions. The Dallas Fed board chair and general counsel both reviewed Rob Kaplan's investment activities and found they "were in compliance with the rules and policies of the Federal Reserve System," said the bank's spokesman James Hoard.

"The idea that they would have a serious role akin to the U.S. Senate in determining who our central bankers are and how they are behaving I think is wrong," said Conti-Brown. "It is not good democratic hygiene."

The trading controversy is the latest embarrassment for the Fed.

Richmond Fed President Jeffrey Lacker resigned abruptly in 2017 as he announced his role in a leak of confidential information about policy options the central bank was considering in 2012.

Past congressional efforts to revamp the Fed system haven't gone far. Lawmakers, just as they did when the institution was created, like having a regional balance of power to offset the influence of Washington and Wall Street.

They argued it protects Fed independence because the regional presidents are not political appointees, while local directors provide on-the-ground insight into the regional economy.

"Board members were very valuable to me," said former Philadelphia Fed President Charles Plosser. Former president of the Atlanta Fed Dennis Lockhart said his boss was his local board: "I did not consider my boss to be the chair of the board of governors."

Even so, Lockhart and other presidents described an inherent give and take within the Fed system. The governors in Washington have ultimate authority over regional bank budgets, for example, they approve presidents and first vice presidents, and can remove any officer.

"The directors are important and valuable to the president and the reserve bank's independence," said Plosser. "But the ultimate authority rests in Washington."

The Board's leverage over reserve banks is often subtle and is also outside of public view.

Every year, regional bank boards and the Board of Governors work together to evaluate the president of a reserve bank.

These annual reviews focus on a range of issues from the banks' operations to the president's role in monetary policy. They lead up to a renewal vote by the Board of Governors on the president's five-year contracts.

Bloomberg Opinion columnist and former Minneapolis Fed President Narayana Kocherlakota, writing in a 2017 essay, said the power of the Washington board over reserve banks is "surprisingly opaque and should be considerably more transparent."