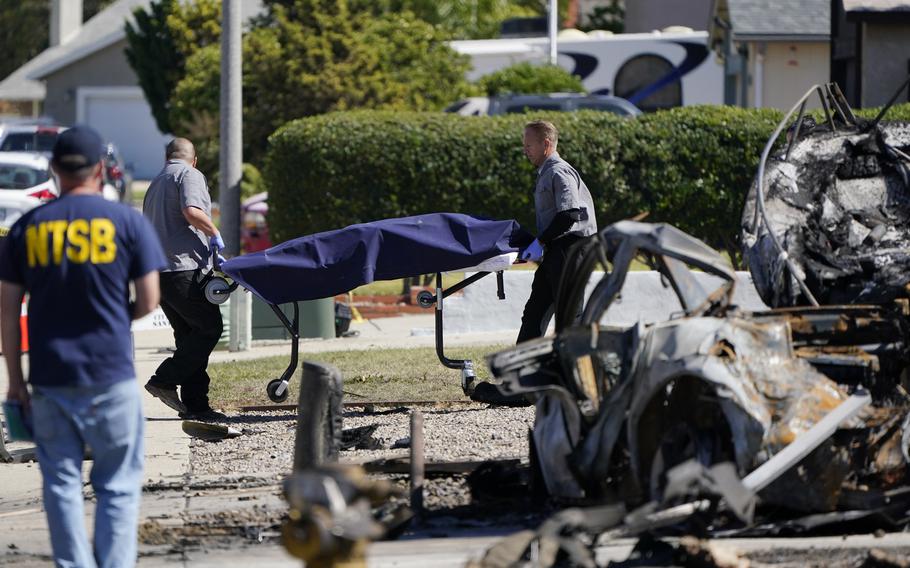 Officials from the San Diego County medical examiners office remove a gurney carrying remains from the site of a plane crash Tuesday, Oct. 12, 2021, in Santee, Calif. Recordings indicate the pilot of a twin-engine plane nose-dived into this San Diego suburb Monday despite a growingly concerned air traffic controller who repeatedly warned the pilot to climb in altitude — information that will be examined by investigators who arrived at the crash scene on Tuesday. (Gregory Bull/AP)

SANTEE, Calif. — Before a twin-engine plane nose-dived into a San Diego suburb, an increasingly concerned air traffic controller told the pilot more than a half-dozen times that he needed to gain altitude, a recording that will be among the evidence examined by federal investigators who arrived Tuesday at the crash scene.

The Cessna 340 smashed into a UPS van, killing the driver, and then hit two houses just after noon Monday in Santee, a suburb of 50,000 people east of San Diego. The pilot, Dr. Sugata Das, died and an elderly couple suffered burns when their home went up in flames. No one was inside at the second residence when the crash occurred.

Al Diehl, a former National Transportation Safety Board investigator, said the recording between air traffic control and Das indicates he was trying to deal with a major distraction or significant emergency on his own, breaking a basic rule that aviators should always tell controllers everything.

"The first thing you do when you're in trouble is call, climb and confess — and he did not do any of the three," Diehl said. "These are very basic rules that flight instructors tell their students."

Diehl, who helped design a Cessna cockpit, said the twin-engine aircraft has a complex system that could lead to deadly mistakes.

Clouds and windy weather may have complicated Das' ability to handle the aircraft, Diehl said. Investigators also will look at whether there could have been a medical emergency, something an autopsy should help reveal.

Robert Katz, a certified flight instructor, said he believed Das "was totally disoriented." Katz said the clouds were low enough that the pilot had to use an instrument landing system while approaching.

"In my opinion, he is clearly disoriented at that point," Katz told CBS8 in San Diego. "He does not know which way is up."

Das worked at Yuma Regional Medical Center in Arizona and was flying from there to Montgomery-Gibbs Executive Airport in San Diego, where he lived. Shortly before the crash, when the plane was about a half-mile from the runway, an air traffic controller alerted Das that the aircraft was too low.

On a recording made by LiveATC, a website that monitors and posts flight communications, the air controller repeatedly warns Das that he needs to climb in altitude. He also cautioned that a C-130, a large military transport plane, was overhead and could cause turbulence.

Das responded he was aware.

The controller later is heard saying, "It looks like you're drifting right of course, are you correcting?"

Das asks if he has been cleared for the runway. The controller says "I need you to fly," warning him that he is coming in too low.

Das tells him he is climbing. The controller urges him to climb again, and Das says he is ascending.

"Ok. It looks like you're descending sir. I need to make sure you are climbing, not descending," the controller says.

Then the controller speaks with more urgency.

The controller repeatedly urged the plane to climb to 5,000 feet, and when it remained at 1,500 feet, the controller warned: "You appear to be descending again, sir."

There is no response.

Diehl noted the plane at the last minute made a sweeping turn to the right as if trying to switch back to another airport that was closer because something was wrong. Das didn't mention that to air traffic control.

KGTV-TV posted video that the station said it received from a viewer showing the plane arcing in the sky and plunging into the neighborhood. People a block away from the scene said their homes shook from the thunderous crash.

Das had been on staff at Yuma Regional Medical Center since 2005, Dr. Bharat Magu, the hospital's chief medical officer, said in a statement. Magu called the father of two young sons an outstanding cardiologist and dedicated family man.

"Our community has lost an exceptional physician, colleague and friend, a man who dedicated his life and career to caring for patients," Magu said.

Das was a licensed pilot and owned the plane he was flying. He lived in San Diego and commuted to Yuma, according to a website for the Power of Love Foundation, a non-profit he directed that helps women and children overseas who are infected or affected by AIDS and HIV.

"Those who knew Steve said he took pride in his work, and his positive attitude and joyful laugh made the hardest days a little lighter," the company said in a statement. "Steve was held in high regard and will be greatly missed."

Krueger was on his regular route when he was killed. He planned to retire on Oct. 22, his brother, Jeffrey Krueger, told KCBS-TV.

Krueger loved his job so much that he even sent his brother photos taken of himself wearing his brown uniform and giving a UPS package to the costumed mammoth mascot at a ski resort, his brother said.

He was held in affection by his customers.

"During Christmas, they would just bombard him with stuff," his brother said.

"He would talk about his customers all the time," and one couple had a dog that would sit in the window waiting for Krueger to come by, his brother said.

Das was born to a Bengali family as the eldest of four siblings and grew up in Pune on the western coast of India, where he earned a medical degree from the University of Pune and worked as a cardiologist before moving to the United States, according to a biography on the website of the Power of Love Foundation, a non-profit involved with helping people with AIDS and HIV where he served as director.

He did additional training in Michigan and moved to Yuma in 2004, where he established a cardiovascular practice.

"In 2010, a fortuitous incident sparked an interest in general aviation" and Das owned two planes, the foundation website said.