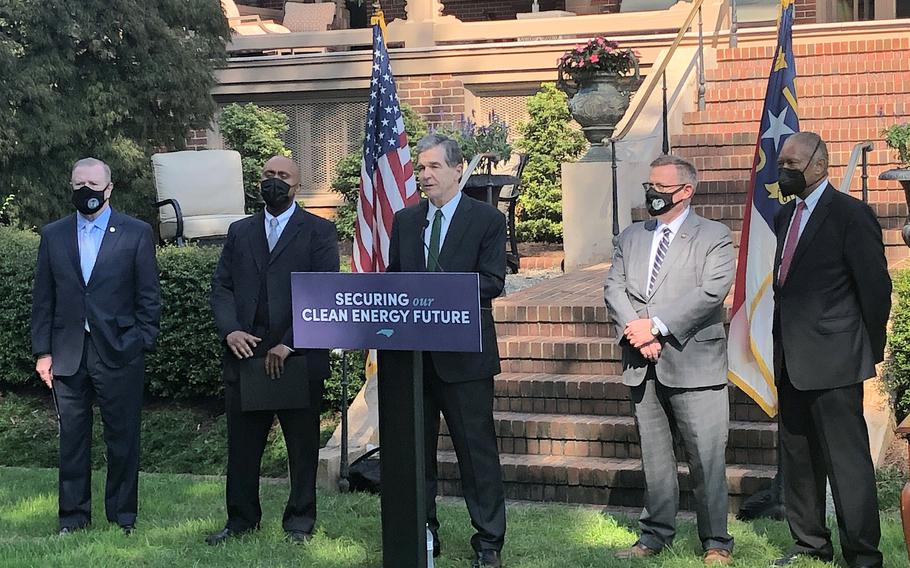 In a ceremony with legislators from both parties, Cooper enacted a consensus measure that now tasks the state Utilities Commission with coming up by the end of 2022 with the arrangements to meet the carbon dioxide reduction goals sought by the governor.

At least 16 states previously have passed legislation establishing greenhouse gas emissions reduction requirements, according to the National Conference of State Legislatures. The only other Southeast state to have done so before Wednesday was Virginia.

"This is a new beginning," Cooper said at the Executive Mansion ceremony. "Putting real and enforceable carbon reduction targets into the law, North Carolina is working to reduce the effect of climate change on marginalized populations, while putting our state at the forefront of the clean energy economy and the jobs that it brings."

The directive aims to reduce energy producers' carbon dioxide output 70% from 2005 levels by 2030, and achieve zero-net CO2 emissions by 2050. To get there, coal-fired power plants operated by Duke Energy, the state's dominant utility, are expected to be retired early, replaced by an evolving mix of alternate fuels for electricity. Duke and other advocacy groups will have input, too.

The new law also allows Duke Energy to seek multiyear rate increases and performance-based earnings incentives from the state Utilities Commission — a significant win for the Charlotte-based company. Representatives of Duke and other business groups supporting the new law attended the ceremony.

Senate leader Phil Berger, a Republican, described the law as a pro-economic growth measure, saying the business slowdown during the Colonial Pipeline disruption in the spring signaled the "consequences of an extended energy supply crunch."

"So it was critically important that the leaders of our state come together to agree on legislation for our energy future, and we did that," Berger said. "The framework we put in place ensures continued reliability of energy here in North Carolina."

The operator of the nation's largest fuel pipeline, Colonial confirmed it paid $4.4 million to a gang of hackers shortly after a May 7 ransomware attack that had temporarily taken the pipeline system offline.

Despite strong bipartisan support for the final measure and Cooper's involvement in negotiations, many environmental groups and advocates for the poor declined to endorse the measure. They said it provided too many loopholes for delaying percentage-reduction emissions goals. They also said it gave Duke an outsized role in forming the plan and lacked monetary assistance for low-income customers to address expected higher bills.

"This plan is not designed to support those hurt first and worst by the ongoing climate crisis," the North Carolina Council of Churches said in a recent statement, adding the bill "will only benefit those who are already thriving, not those who are barely surviving."

Bill supporters said there are ratemaking guardrails inside the measure and several other current programs to help customers with efficient electricity use. And the commission must achieve the "least cost path" and ensure energy reliability in reaching the targeted percentages. Cooper said renewable energy sources also would continue to decline in price.

The governor and others opposed the original measure that passed the House in July, which was much more prescriptive in telling Duke Energy which specific plants to retire early and at times what replacement fuel should be used, like natural gas. It also would have failed to reach the 70% CO2 reduction goal for 2030 that Cooper wanted. This led to extensive talks between state senators and Cooper for an agreement that was announced almost two weeks ago.

"We're putting into law the roadmap for a sustainable future for our children and our grandchildren," Senate Minority Leader Dan Blue of Wake County said. "The efforts to see this plan across the finish line cannot be understated."